Data from the CBN’s recently released H1 2018 report reveal that a total volume of 596 million transactions was recorded on electronic payment channels in the first half of this year, compared with 462 million in the same period of 2017. As expected, ATM transactions dominated with a volume of 429 million.

Internet subscriptions directly correlated with electronic transactions stood at 103 million as at end-June, according to the Nigerian Communications Commission (NCC). This translates into a penetration rate of 56%. However, we do note that there has since been an increase in internet subscriptions to 106 million in September. 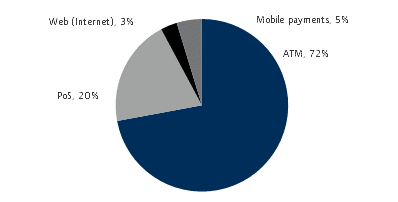 Announcement on the Completion of the New Manulife-ESR Joint Venture’s Acquisition of PGGM’s Real Estate Portfolio for RMB1.7 Billion

‘PENINSULA’ will have a ‘TwitterBlueroom LIVE Q&A’ session to interact with global fans on July 9 KST, ahead of its premiere!

Some different priorities in the Ghanaian response to Coronavirus

For a look at another response in the sub-region to COVID-19, we have read the statement following the meetings of the monetary policy committee...
Read more

President of Dangote Group, Aliko Dangote has said that despite the challenging economic situation in 2019, Dangote Cement was able to sustain 54,000 jobs in...
Read more

The Coronavirus pandemic (COVID-19) has not only affected governments, communities and families but has impacted global economies, bringing about unprecedented market uncertainties and fluctuations,...
Read more
- Advertisement -