East Africans on Saturday retained their dominance of the Access Bank Lagos City Marathon carting away the star prizes in the male and female categories of $50,000 each. 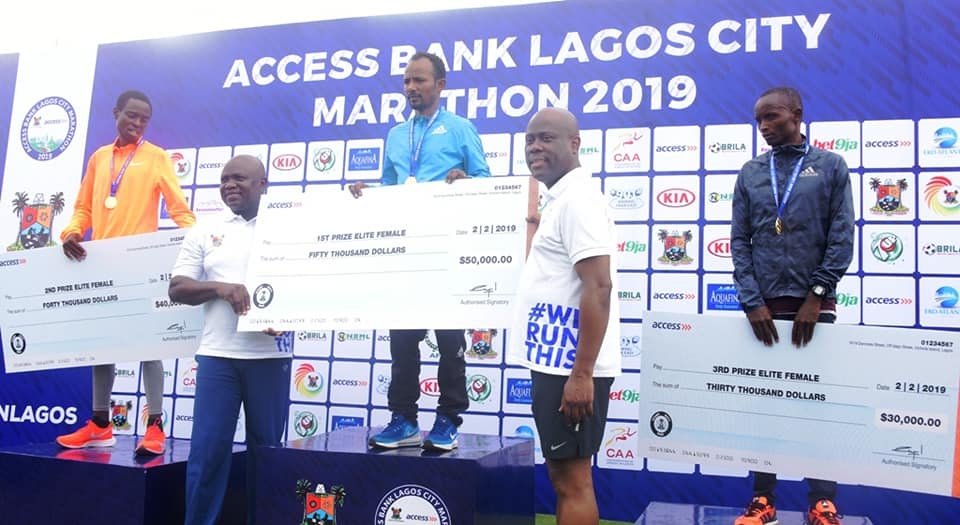 This time around, however, an Ethiopian, Sintatehu Legese won the star prize of $50, 000 in the male category finishing the race in 2 hours, 17 minutes and 28 seconds to beat defending champion, Joshua Kiprotich from Kenya who breast the tape in 2 hours, 18 minutes and 16 seconds to emerge first runner up with a prize money of $40,000. 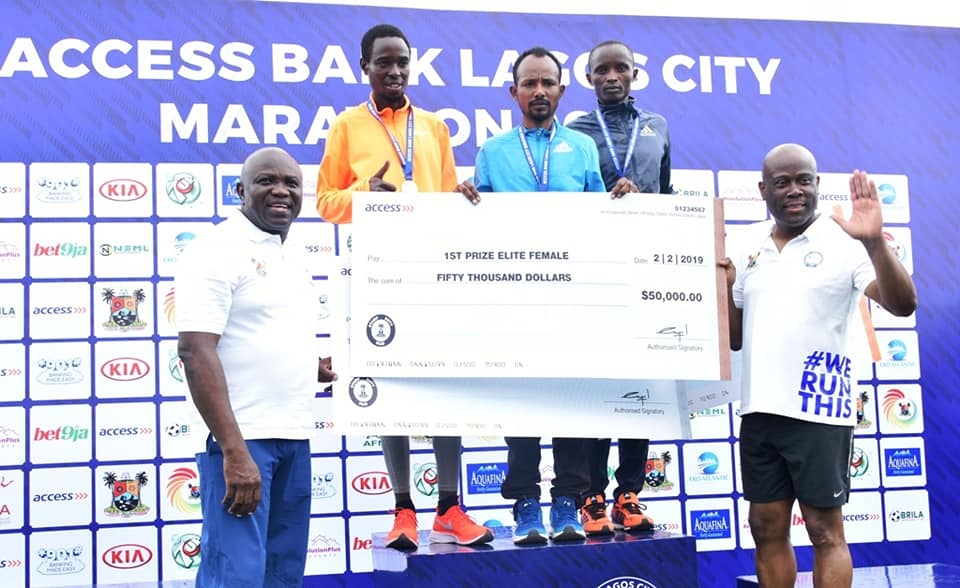 In the female category, it was a clean sweep for Ethiopia as the trio of Meseret Dinke, Alemenesh Herpha Guta and Kebena Chala finished first, second and third to win $50,000, $40,000 and $30,000 respectively. 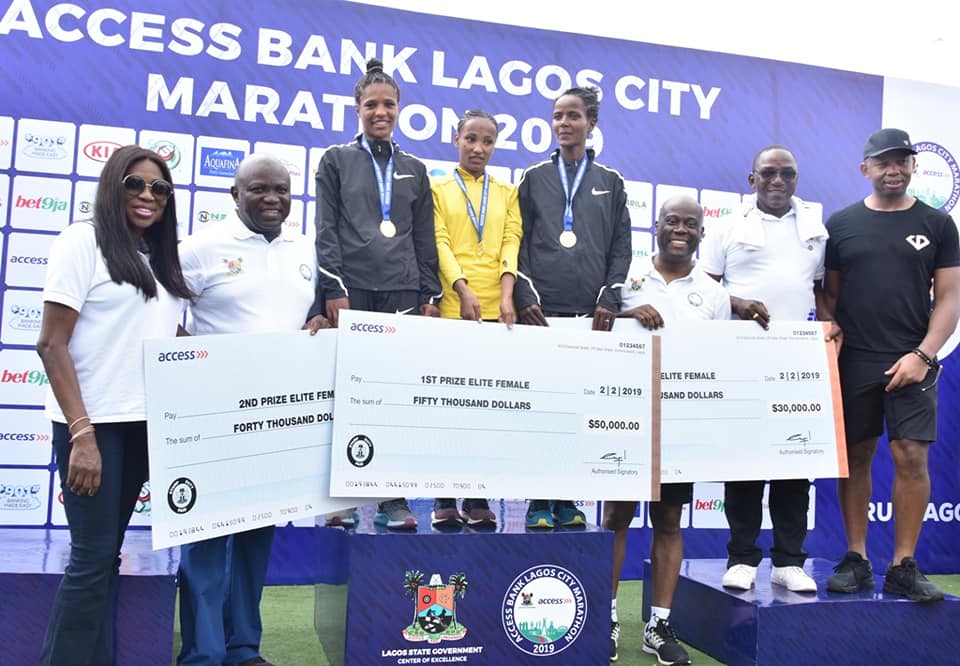 Speaking while presenting prizes to the winners, Lagos State Governor, Mr Akinwunmi Ambode said it was gratifying that the marathon was getting bigger and better yearly, adding that the competition had come to stay.

He specifically appreciated all Lagosians for cooperating with the government to ensure the success of the tournament each year since it began four years ago, saying the initiative was basically in line with the determination of his administration to use sports, tourism and entertainment to promote Lagos and grow the State’s Gross Domestic Product (GDP). 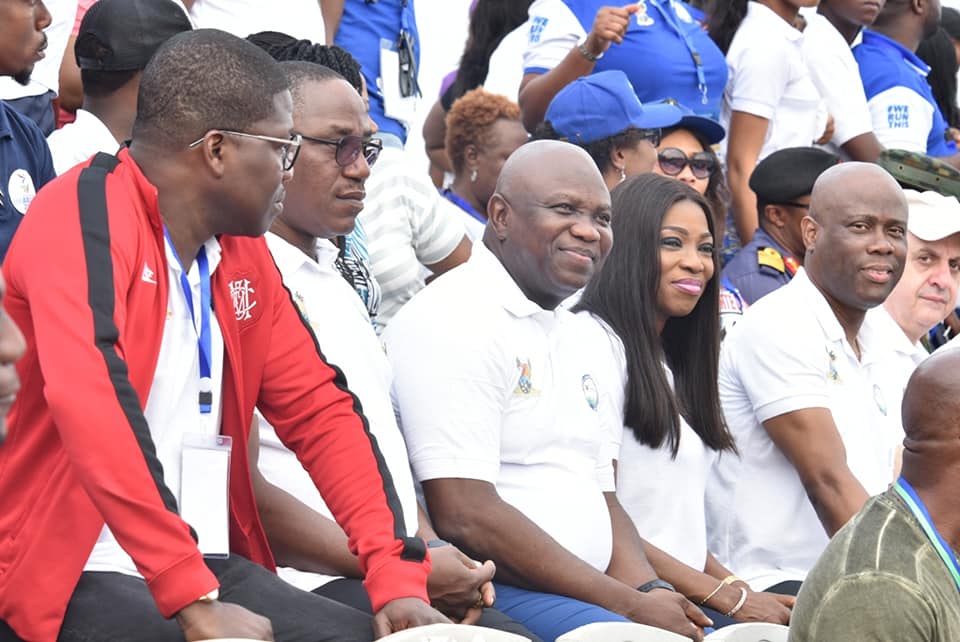 “I want to say a big thank you to all Lagosians for tolerating us in the last four years because this is the fourth time we are doing this Lagos Access Marathon and it has been improving year in, year out. This year, we had 58 countries participating and over 100,000 athletes also taking part in this journey.

“The marathon is part of our administration’s initiative to use sports, tourism, entertainment, arts and culture to promote the excellence of Lagos and positively engage the youth. The competition has been getting bigger and better yearly and this year’s edition is exceptional being that it attracted the highest participation worldwide and an increase in the number of athletes and prizes,” Governor Ambode said.

While expressing optimism that the marathon would be sustained, Governor Ambode urged Lagosians to vote for all the candidates of the All Progressives Congress (APC) in the forthcoming general elections from the Presidency to National Assembly and at the State levels.

“I believe strongly that what we have started will be continued by the APC gubernatorial candidate, Jide Sanwo-Olu when he comes in and I believe strongly also that this will take the GDP of Lagos to greater heights.

“Remember next Saturday is the presidential election. You know where my heart is and that is four plus four; that is where we are going to be. On March 2nd also, we do the same thing which is to vote all APC candidates in the State. God bless all Lagosians; I love all of you and I remain yours forever,” the Governor said.

Besides, Governor Ambode also used the occasion to donate N2.5million to an upcoming artiste, Johnson David who was called to perform on stage from the crowd by Nigerian hip-hop star, D Banj.

“We just want to say a big thank you to D Banj for the opportunity to bring out this kind of talent impromptu. I was just going to say D Banj should mentor him and in addition to that, my initial contribution is to give him N2.5million.

“This is what the Lagos story is all about –if you can dream it, you can make it happen. So, he must have been dreaming it and today he has gotten the access to the Lagos Access Bank Marathon and today, he is a changed person.

“So, this is what we have always been saying; the future belongs to all these young people and you can see that all of you are almost in the same age bracket and this is what the future of Lagos is and what we want to preach and continue to preach that every person can have that opportunity to make it in life,” he said.

The high point of the event was various performances by A-list artistes including Teni, CDQ, Slim Case, Olamide and D Banj who equally seized the opportunity to commend Governor Ambode for initiating and implementing the platform of the marathon and for his achievements in office in the last three and half years.

Dangote Group has in the last five years invested over N63bn in the South East with the purchase of over...
Read more
Brand News

LXE408 is a first-in-class compound, discovered at Novartis with financial support from the Wellcome Trust; Novartis is responsible for completing Phase I clinical trials and...
Read more
Brand News

CardinalStone Research According to the National Bureau of Statistics (NBS), Nigeria’s economy grew by 2.55% YoY in Q4’19 compared to 2.28% YoY in Q3’19 and...
Read more
Business & Economy

Foreign flows into Nigeria have been relatively strong in 2020 so far Coronavirus fears risk hampering both oil and non-oil inflows The exchange...
Read more

Simba Group, distributors of Luminous power back up solutions including inverters, batteries, and solar-powered systems, have unveiled a ‘first of its kind’ Luminous Solar...
Read more

Governor Wike announced to this latest Congress in Budapest that the Academy has now been completed and commissioned in September 2019 BUDAPEST, Hungary, February 5,...
Read more