The Minister of Health, Isaac Adewole, says Nigeria has moved to the fourth position among countries worst hit by the HIV epidemic. 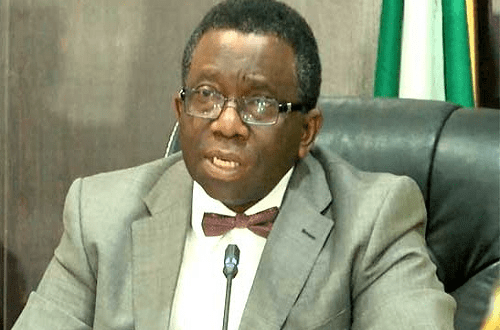 Speaking during a press briefing held after the announcement of the Nigeria HIV/AIDs Indicator and Impact Survey (NAIIS) result on Thursday, Mr Adewole said Nigeria has now moved to the fourth position after South Africa, India and Mozambique following the findings of the survey. The event was held at the Banquet Hall of the State House in Abuja.

In 2016, a report by the World Health Organisation stated that Nigeria had the second largest HIV epidemic, with over 196,000 adolescents representing 10 per cent of the global burden epidemic.

However, findings from the largest HIV survey to be conducted in the world puts Nigeria prevalence rate at 1.4 per cent.

The federal government launched the National AIDS survey in June 2018 to determine the true distribution of HIV and AIDS, Hepatitis B and Hepatitis C in the country.

The result of the survey shows that about 1.9 million Nigerians are currently living with HIV, a figure which is lower than the previous estimate.

In his keynote address, Mr Adewole said the NAIIS findings provide Nigeria with an accurate national HIV prevalence measure of 1.4 per cent.

“NAIIS also showed we are able to effectively provide antiretroviral treatment,” he said.

Mr Adewole said everyone infected with HIV needs to get treatment so they can achieve viral suppression, especially pregnant women.

“We must ensure pregnant women have access to antenatal services and are tested during every pregnancy. We know we can support HIV-positive mothers, hence ensuring the next generation is free from HIV.” he said.

While unveiling the survey results, President Muhammadu Buhari said the goal to end AIDs in Nigeria by 2030 is still feasible.

“For the first time, the end of AIDs as a public threat by 2030 is truly in sight for our country,” the president said.

“I urge all of us not to relent but to increase the momentum. Let us work collectively and push for the last mile.”

In his goodwill message, David Young, Charge de Affairs, Embassy of the United States of America, said it is wonderful to see the remarkable result the Nigerian government achieved with support from the United States.

He said NAIIS is a project embarked on to solve the current challenge of HIV in the country.

He applauded the field workers for their commitments towards the success of the NAIIS survey.

He also thanked the president for his personal commitment to the success of the survey.

Governor of Lagos State, Mr. Babajide Sanwo-Olu has called for stronger collaboration among all stakeholders to eradicate the HIV pandemic in Nigeria and end...
Read more

The Lagos State AIDS Control Agency (LSACA) has commenced a sensitisation programme for about 250 members of the Deaf and Blind communities in Lagos...
Read more