The sort code is a number that usually identifies both the bank and the branch where an account is held. The sort...
Read more
- Advertisement -
As part of its fight against smuggling activities around border areas of Ogun State, the state command of Nigeria Customs Service has intercepted over 1.8 tons of cannabis sativa popularly known as Indian hemp. 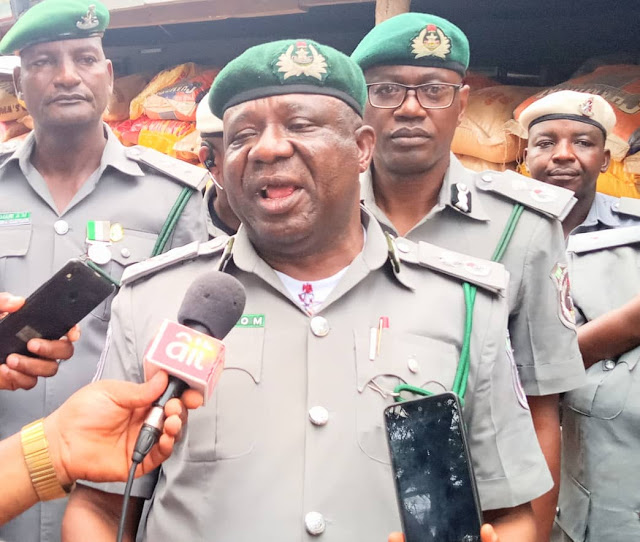 The Customs Area Controller, Michael Agbara made this known to newsmen on Tuesday at the command’s headquarters, Idiroko, Ogun State while reeling out the scorecard of the command for the first quarter of 2019 fiscal year.
Agbara explained that the 1.8 tons of cannabis consist of 176 sacks, 120 compressed book packs and 21 compressed coconut packs of Indian hemp.
He further added that the command between January and March 2019 made 226 seizures comprising of 83 units of vehicles, 12,720 bags of foreign rice,  446 kegs of vegetable oil. Others include 6 sacks of used
footwear, 583 packs of used tyres and 550 kegs of PMS.
He added that the recorded success were ravelled with a series of clashes between officers of the command and some smugglers leading to loss of lives and property.
Agbara, however, reiterated the commitment of the command to further dialogue, engage, sensitize and educate the public on social and economic implication of smuggling.
He equally announced that the suspects involved in the murder of Customs Officer, Hamisu Sani were facing trial, while the command has succeeded in arresting three suspects involved in the attack of officers of the command at Papalanto on 8th March 2019.
He added that, “the suspects have been arraigned before the Federal High Court, Abeokuta and are currently on remand in prison for obstruction of officers while on duty armed with dangerous weapons in contravention of section 11 of CEMA CAP 45 LFN 2004 as amended.
“Also, the smugglers who mobilized Okada riders to attack officers and even vandalized our sign post at Quarry road, Abeokuta on Saturday 23rd March 2019 has been apprehended and is presently undergoing interrogation prior to arraignment in court”.
Meanwhile, the command has generated total revenue of three billion, two hundred and fifty eight million, six hundred and twenty eight thousand, one hundred, ninety naira and fifty kobo (N3,  258,628,190.50) for
the period under review.

In line with its agenda of ensuring proper Town Planning and  Urban renewal, the Ogun State Government through its Ministry of Physical Planning and...
Read more

The Ogun State government, in partnership with the former president, Olusegun Obasanjo, has said it plans to commission an agro-allied airport for commodities in...
Read more

Ogun govt steps up efforts to minimise spread of HIV/AIDS

In a bid to further reduce the spread of HIV/AIDS, the Ogun State Government, through the Agency for the Control of AIDS (OGSACA), has...
Read more
- Advertisement -