As workers in the country mark the 2019 May Day, the Ondo state Governor, Arakunrin Oluwarotimi Akeredolu SAN, has promised to pay N30,000 new minimum wage to workers in the state.

Akeredolu who gave the assurance on Wednesday at the 2019 workers day celebration in Akure, Ondo state capital, said that paying the N30,000 new minimum wage in the state is not a problem and would not be an issue in the state since it has been approved by law. 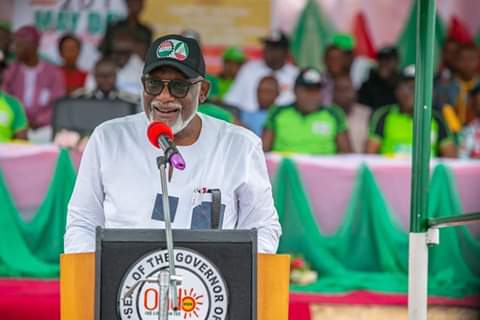 His words, “This government will pay minimum wage as approved by law. I can say categorically that what you have today as take-home can hardly take anybody home. Your salary and the minimum wage are non-negotiable.

“We, however, admonish our colleagues in service to reciprocate all the good gestures of the Government, and the sacrifices made by those who are not employed by the State, to rededicate themselves and embrace the best practices for progress.

“We have ensured that those who merit promotions get elevated. The exercise will continue. We will also ensure that adequate training programmes are organized for the benefit of workers.

“We promised during our campaigns that we would not allow any worker to suffer under our watch. We have kept this promise. We will remain focused in the interest of our people. We shall not allow any extraneous interests to undermine the development of the State. We will resist any person or groups of persons who may wish to shortchange the people of the State under any guise.

Read Also:  Investment Views and Stock Recommendations for This Week

“We shall hold on, firmly, to the belief that the welfare of the citizenry should be the primary purpose of governance. We shall proceed with courage, imbued with the confidence that our actions are just.

“State will not move forward without your workers. In view of this, we must cater to all of you because the welfare of workers in Ondo state is very paramount to us”.

He said labour was the bedrock of development in any nation and commended the unions for their support so far, adding that his administration is determined to keep on it campaign promises.

In his address, the Chairman, Nigeria Labour Congress (NLC) in Ondo state, Comrade Sunday Adeleye said the new minimum wage was a matter of law which must be implemented by the state governments.

Read Also:  New minimum wage: It Must Be Approved before May Day – NLC tells Buhari

Its Now Official: Lagos Civil Servants To Get Above New Minimum Wage

Ekiti To Begin Payment Of N30,000 Minimum Wage This Month