Data from BudgIT has shown that for every ₦100 shared to the Osun State government as revenue allocation from...
Read more
- Advertisement -

Promasidor Nigeria Limited has granted goods of high nutritional value to underprivileged children in orphanages in Lagos as its addition to their expenditure. The indication was to celebrate the World Milk Day held yearly on June 1st.

The company is a leading player in the Fast-Moving Consumer Goods (FMCG) sector, and the makers of Cowbell Milk, Loya Milk, Miksi Milk and other quality brands such as Sunvita, Top Tea, and Onga Seasoning.

The World Milk Day is set aside by the Food and Agriculture Organisation of the United Nations to recognise the importance of milk as a global food.

To mark the Day, Promasidor made the donation of Cowbell Milk, Miksi Chocolate drink, Cowbell Strawberry and Sunvita, all rich in vitamins and minerals, to So-Said Charity Home in Okota; Tower of Refuge Orphanage, Surulere; Bab-Es-Salam Home, Ikeja; and Little Saints Orphanage located in Egbeda. 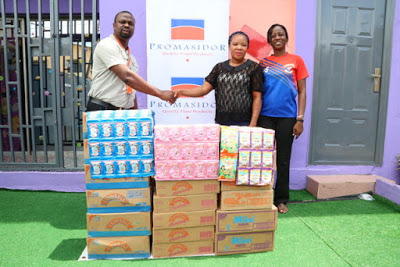 Commenting on the donation, Vincent Olayinka, Category Manager, Dairy and Beverages, Promasidor Nigeria Limited, said the company through its flagship brand, Cowbell, Our milk, embarked on the initiative as part of its corporate social responsibility to celebrate children and enhance their nutritional intake.

He emphasised that Cowbell, Our Milk, contains a special blend of Vitamins and minerals known as Vitarich, and especially, it contains Vitamin B9 for cognitive development of children. He explains further that the donation was part of the brand’s mission to celebrate World Milk Day with the children of these schools.

According to Olayinka, the initiative is embarked upon annually, as the company did same to five orphanages last year to mark the yearly event.

Receiving the products, Roseline Banks, the Administrator of So-Said Charity Home, commended Promasidor for the gifts, saying it is worth emulating as they would help keep the children healthy, with all the nutritional values attached.

At Towers of Refuge Orphanage, Mercy Arinze, the Administrator, applauded Promasidor for alleviating the plight of the less privileged. “When l was called that my orphanage would be visited, I was elated and thanked them for the goodwill. I am delighted as a beneficiary and will ensure the gifts are well utilised,” she said.

There were also smiles on the face of Hassan Tahir, Head of Bab-Es-Salam Home, who received the products. He said the orphanage has been existing for the past 28 years and that some of the children have grown up to be students in tertiary institutions across the country, while some others worked in various large organisations in Lagos.

“It is a pleasure for Promasidor to remember us at this time of World Milk Day.  I urge other organisations to emulate what the company has done in order to reduce difficulties in orphanages,” Tahir stated.

Appreciation was also shown at Little Saints Orphanage. George Mathew, who is a Pastor of Christian Youth Fellowship attached to the orphanage, extolled Promasidor and its team for extending their kindness to children.

Promasidor has been at the forefront of promoting children’s wellbeing. For over 20 years, Cowbell has encouraged secondary school students to develop an interest in the subject area of mathematics through Cowbellpedia Secondary School TV Quiz Show.

The company’s Loya Milk brand has nurtured swimming talent among students through the Loya Swim Meet competition, which has been held in various cities across the nation.

Also, Promasidor, through its career guidance workshop christened Promasidor Harness Your Dream, has helped students to make proper career choices that relate to their talents, attitude and dreams in their educational pursuits.