African nations have been optimistic about free trade agreements with western states such as the African Growth Opportunity Act (AGOA), however, there has been less enthusiasm with intra-continental free trade agreements. While regional blocs such as East African Community (EAC) and the Economic Community of West African States (ECOWAS) have been in the frontline in pushing for sub-regional trade integration, the results are still far from exciting.

According to the Washington Post, most regional economic communities (RECs) are underperforming, with a low level of compliance by member states, which has delayed successful integration.  The RECs also create a system of silos where regions seem to only pursue trade integration within their domains thus further accentuating trade divisions across the continent. These trade divisions have been well exploited by global giants especially China which has greater footprints across the continent simply because it has been able to build complex trade infrastructure with individual nations. By operating ineffectually in the silos of RECs, African nations have not been able to tap trade opportunities amongst themselves but also left their flanks open to western nations thus further worsening the trade imbalance of the continent. According to the UN Economic Commission on Africa, intra-African trade is likely to increase by 52% under the AfCFTA and will double upon the further removal of non-tariff barriers. 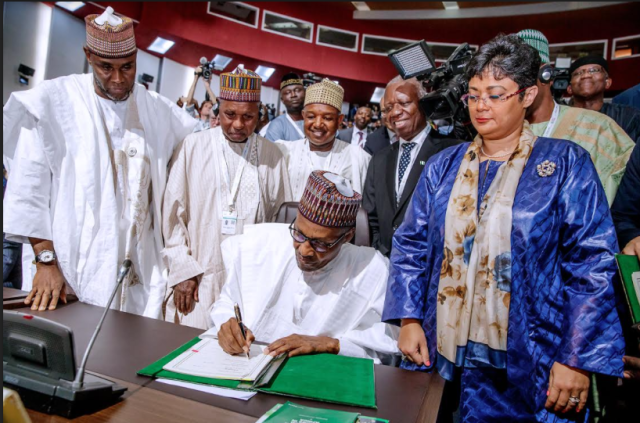 Challenges – Protectionists and the arguments of the one-sided coin

Nothing typifies the resistance to AfCFTA as much as Nigeria’s initial withdrawal from the signing ceremony in Kigali, capital of Rwanda in March 2018. President Muhammadu Buhari cancelled his attendance at the signing ceremony citing the need “to allow time for broader consultations”. The main trade union in the country – the Nigerian Labour Congress (NLC) further warned on the dangers of the trade agreement describing it as a “renewed, extremely dangerous and radioactive neo-liberal policy initiative”.

These fears stem from arguments around turning Nigeria into a dumping ground for goods from the rest of the continent especially countries with more advanced manufacturing capabilities such as South Africa and Morocco. While these fears may not be entirely out of place, they are actually being amplified and probably exaggerated. And this argument is also flawed on two major premises. Firstly, despite being a member of ECOWAS for decades, Nigeria has not become a dumping ground for goods manufactured in the region. Rather, its goods that originate from outside the sub-region but imported through neighbouring countries that are being dumped in Nigeria. This dumping is also driven by structural bottlenecks such as inefficiencies in the port and poorly conceived trade and tariff policies that leave Nigeria vulnerable to smuggling. Secondly, the AfCFTA is a trade agreement that not only opens up Nigeria’s borders but also opens up the borders of the other signatory Countries. Thus, while Nigeria will be receiving more volume of goods from the other Countries, Manufacturers in Nigeria will also gain an upside as they will be able to access a wider market across the Continent on the same terms.

Another challenge that may arise could be the loss of revenue from the collection of customs’ duties to the state, though this may be moderated by the long-term gains. Estimates by UNCTAD, indicate that while the elimination of all tariffs between African Countries would take an annual $4.1 billion out of the trading states’ coffers, it would create an overall annual welfare gain of $16.1 billion in the long run.

Despite the promise of long-term gains by AfCFTA, the biggest challenge to the free trade agreement has probably received the least coverage. The real barriers to AfCFTA will be the structural bottlenecks associated with intra-continental exports. This could vary from checkpoints across borders or aggressive trade policies that frustrate the free movement of goods and services. The president of Dangote Group, a conglomerate with interests mainly in Cement across the Continent, citing the frustrations and difficulties his group often goes through in exporting products to neighbouring African Countries, recommends that these bottlenecks must be addressed if Nigeria has to emerge a winner in AfCFTA. Another germane challenge that could also cap the growth potentials of AfCFTA will be currency conversions especially in the short to medium term. The glut of soft-currencies across the Continent increases the unattractiveness of these currencies outside their home borders. The AfCFTA framework must seek to resolve these caps to ensure this initiative can genuinely place the continent on the path of long-term prosperity.

AfCFTA and the Nigerian Capital Market – Retracing the old paths

Nigeria’s capital market is one of the oldest on the continent and quite a number of the listed Companies which are perceived as fundamental stocks by long term investors are mainly real sector multinationals. What is instructive about these fundamental stocks is that while many of these Companies enjoy strong positive perception as multinationals – a perception that is further consolidated by their big-ticket investments in local manufacturing – quite a number of these firms started off as trading posts in Nigeria.

Nigeria’s independence in the 1960s led to a new wave of promise which quickly attracted lots of global names into the country. Some of the prominent names that berthed in Nigeria around that time include Cadbury and Nestle, two global food giants. While these companies were mainly involved in trading (mainly imports) in Nigeria at the time, their operations subsequently expanded into local manufacturing. Manufacturing has a significant multiplier effect on any economy because it stimulates activities along the value chain. The likes of Nestle and Cadbury only invested in local manufacturing because their initial focus on trading clearly showed there was a strong business case to increase exposure to Nigeria. This strong business case led to the establishment of manufacturing plants.

Stretching further into history, companies such as Unilever Nigeria Plc and PZ Cussons Nigeria Plc had also started out as trading posts in the 19th Century in the pre-amalgamated Nigeria. With time, these companies also invested in local manufacturing.

By the 1970s, with greater investor confidence in the Nigerian economy following the petrodollar boom, many of these companies began to list their shares on the Nigerian Stock Exchange (NSE) thus creating new paths to wealth for Nigerian investors. The evolution of these multinationals from trading posts to manufacturing companies that eventually listed on the stock exchange offers germane lessons to today’s generation of policymakers and other advocates of protectionism.

And the lessons are clear. Firstly, AfCFTA will open up Nigeria’s market to the rest of the continent. And quite a number of Companies from across the continent may be attracted to Nigeria initially, but simply as trading posts. However, with time, as the promise of Nigeria unfolds for these Companies, many like the global multinationals ahead of them will evolve into manufacturing Companies that will lead to greater multipliers for the economy. And then, as long as the capital market continues to fulfil its capital formation roles, these companies may be inclined to list on the exchange, thus offering a new generation of investors increased access to wealth.

Positioning the Capital Market to tap into AfCFTA

The Nigerian capital market especially the Stock Market has long been derided by institutional investors as a shallow market with only a few fundamental Stocks. Nevertheless, it still remains one of the top five markets on the Continent by market capitalisation and the second in Sub-Saharan Africa. This throws up some significant upsides for the Nigerian Capital Market.

As the real sector and trading sector go continental, the financial sector especially the capital market must also begin to think continental. The Nigerian capital market must begin to position itself for cross border listings of some of the biggest companies across the continent whose home countries do not have developed capital markets. Part of the ways of stimulating these listings is by ensuring the capital market can fulfil its role of long-term capital formation. Other measures that will help stimulate investor confidence such as corporate governance and disclosure standards for listed corporations and protection of minority shareholders must also be put in place to attract these foreign listings.

Overall, as President Buhari leads Nigeria into AfCFTA at the Extra-Ordinary Summit of the African Union in Niamey, Niger Republic, Agusto & Co believes the country stands to gain significantly in the long run by being a signatory to the free trade agreement. And to policymakers, activists and businesses that may be worried about the prospects of increased trade and competition arising from AfCFTA, Nollywood – which has benefitted immensely from trade and competition across the continent – may just be the inspiration to clear the doubts that may arise.

The AfCFTA: Is Xenophobia a threat?

In the face of rising protectionism, trade tensions and economic disintegration in the global scenery, the African continent is at the concluding phase of...
Read more

Electricity generation companies (Gencos) in Nigeria have reported how Nigeria may not completely profit from the continental trade agreement – the African Continental Free...
Read more
- Advertisement -