One of Nigeria’s leading beer brand’s Goldberg Lager has successfully capped off the 2019 edition of its proprietary music talent hunt, Ariya Repete.

After 3 months of exciting musical performances, Ariya Repete 2019 finally came to an exciting conclusion on the night of Friday, the 9th of August. The finale was hosted at the car park of the Ikeja City Mall and it was packed full with thousands of music lovers who turned out en-masse to witness the grand finale. 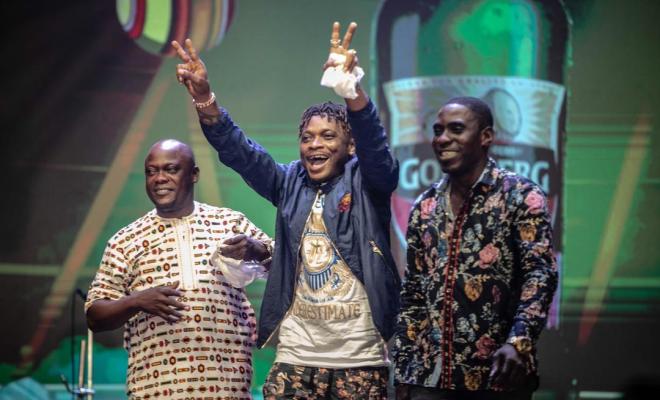 All 9 finalists treated the audience to some spectacular performances as they showed why they have gotten this far in the competition. It wasn’t an easy call for the Judges who had the near-impossible task of selecting the 3 finalists to win their share of the 20 million Naira grand prize.

Hosting the night was the ever hilarious Odunlade Akinlade as well as Naija Ninja, Sound Sultan, and Energy god, Do2un. These hosts as well as the star-studded Judges including, Puffy Tee, Yinka Davis, and King Sunny Ade, added further star power to the exciting event.

King Sunny Ade graced the stage and delivered amazing performances fitting of the occasion. However, the night belonged to the 3 amazing talents who etched their names in Ariya Repete history.

All contestants had two performances to impress the Judges, as they all performed original songs. At the end of the night, Suliamon Adeyemi, Yomi Johnson, and Mayowa Alayo emerged victorious in the Fuji, Juju, and Afro-pop category.

All 3 winners could not hold their joy as the trio got very emotional when receiving their prizes. Mayowa Alayo, who has had a topsy turvy run to the final, particularly after dealing with the tragic death of his infant child who passed away on the day of his audition, was clearly elated saying, “I still think I’m dreaming, I can’t believe I won, I’m so grateful to everyone who has supported me and Goldberg Lager, Thank you!”.

Speaking after the final showpiece, Goldberg Lager, Brand Manager, Olufunmilayo Ogunbodede remarked on the occasion, saying, “It’s been a great show, and I’m glad to see these talented acts emerge as winners. I believe, however, that everyone who has come on the show is a winner, and we are proud of the talents we have uncovered over the course of these 3 months. We thank the consumers for always coming out and cheering the contestants, and we can’t wait to delight our consumers with more initiatives such as these.”

Climaxing the night was a stunning performance by Goldberg brand ambassador and Yoruba Hip-hop icon, Olamide, who performed on stage, much to the delight of all in attendance. This was followed by performances by Fuji duo, Pasuma and Taye Currency.

The night provided a perfect culmination to 3 months of wonderful musical performances across 8 cities. It was a fitting night, filled with sensation performances and fans are eagerly anticipating next year’s edition.

Ariya Repete was proudly sponsored by Goldberg Lager. The beer brand consistently pushes the bar of excellence by continually providing fans and consumers with remarkable experiences which dial up the culture and traditions of the people, whilst also appreciating modern social conventions.

The relaunch of the brand which also occurred on the night marks a new dawn for Goldberg Lager, which has now been reformulated for a greater tasting experience. The all-new Goldberg is the mark of respect and is now adorned with an image of the talking drum.

The bottle also features a new crown cork, a motif design on its label as well as two beautifully designed medallions that speak to the excellent craftsmanship of the brand. All of these new aesthetic features powerfully reflects the stature and stance of Goldberg as the market leader.

From cooking up smash beats to promoting cultural heritage, Ayorinde Kehinde Okiki, otherwise known as DJ Kaywise has just been unveiled as the new...
Read more

…Becomes The Top Enjoyment Spot In The State As part of its efforts to deliver quality enjoyment to consumers, Goldberg Lager has completed the renovation...
Read more

5 things to look forward to at Ojude Oba with Goldberg

For over a century, the Ojude Oba Festival in Ijebu-Ode has remained one of the most celebrated events in the social calendar of the...
Read more
- Advertisement -