Earlier, GDP figures were released for Nigeria and South Africa, showing that growth remained at a suboptimal level, as the two African giants expanded by a meagre 1.94% y/y, and 0.9% y/y respectively compared to their respective population growth rate of 2.6% and 1.6%. 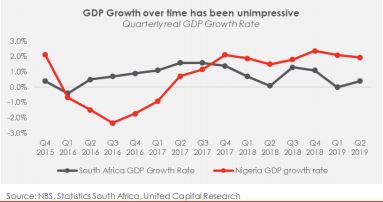 The sluggish outcome was not surprising, as both economies continue to battle with infrastructural challenges, which have continually undermined their industrial production and business activities. For South Africa, the state-owned power utility company, Eskom,
continues to battle with mounting debts. For Nigeria, the power sector has been plagued with illiquidity, and under capacity to distribute enough power to its citizens. This has limited the ability for these countries to transform their core commodity exports (crude oil & minerals), into manufactured value-adding competitive products. Accordingly, the manufacturing sector growth has remained underwhelming in both countries. down by 0.1% y/y in Nigeria, and marginally up by 0.5% y/y in South Africa.

Yet, we believe to maintain their status as Africa’s largest economies and continually attract investment inflows, a lot must be done to address the current structural challenges, with the likes of Kenya and Rwanda becoming a destination hub for investments. However, with the recent ongoing power sector developments in Nigeria, and the continuous bailout of Eskom, there may be light at the end of the tunnel for these struggling giants.

5 Things to Expect from the Pepper Dem Reunion Show

While most people take having a fixed, physical address for granted, 2 billion people across the globe either don't have an address or have...
Read more
Entertainment & Lifestyle

Africa is the largest cocoa producing region in the world. Jo Thys, VP Cocoa Africa at Barry Callebaut, explains how he and his team...
Read more
- Advertisement -

In the first quarter of 2020, Nigeria's Gross Domestic Product (GDP) grew by 1.87%(year-on-year) in real terms. This performance was recorded against the backdrop...
Read more

In the just concluded week, crude oil prices increased given the commitments made by the Organisation of the Petroleum Exporting Countries (OPEC) and their...
Read more

Has The Dynamics Of The Oil Market Changed?