Disinflation continues in Aug-19 as Headline rate moderates to 11.02% y/y

Earlier, the National Bureau of Statistics (NBS) published Nigeria’s inflation report for Aug-19, showing headline inflation rate slowed for the third consecutive month, down marginally by 6bps to 11.02% y/y. Similarly, month-on-month (m/m) headline inflation rate further declined to 0.99% m/m (vs Jul-19: 1.01% m/m). Further analysis showed that the performance was driven by y/y and m/m disinflation by food and core Inflation sub-indices. Notably, the rate of acceleration in the food inflation slowed, as the sub-index shed 22bps to 13.17%y/y and 12bps to 1.22% m/m respectively. This was complemented by a sustained decline in the core inflation sub-index (down 12bps to 8.68%y/y and 11bps to 0.67% m/m). 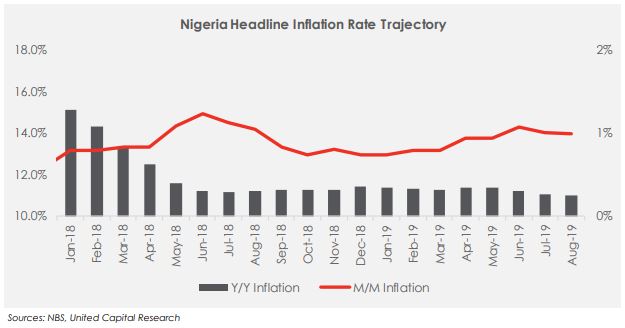 We note that the continued moderation in the food inflation sub-index was supported by the increased supply of food items that trailed the harvest season. For the slowdown in the core inflation sub-index, we suspect that the partial closure of the border which affected smuggling of petroleum products negatively buoyed domestic supply of the products and reduced pressure on prices. The impact of the Central Bank of Nigeria’s continued FX intervention, which created stability of the foreign exchange rate, also tempered core inflation, in our view.

For the month of Sep-19, we expect several factors to have a push and pull effect on the headline inflation figure. Historically, the month of September has been recording a m/m decline for three consecutive years. However, due to recent developments around the border closure and the implementation of the restriction of FX for imports of dairy products, we expect these developments to overshadow the supply of new products from the ongoing harvest season. Accordingly, we expect pressure on food inflation sub-index to resurface, while the core inflation should remain tepid amid the continued regulation of PMS prices and relative stability of FX rate. Additionally, we expect the headline inflation rate to increase, partially due to the low base effect of Sept-18. Therefore, m/m and y/y headline inflation should inch marginally upwards, at an estimated value of 1.0% and 11.19% respectively, with the latter remaining above 11.0% threshold.

For the rest of the year, with hopes on the final implementation of the new minimum wage, coupled with the CBN’s renewed drive to include more food items on the restricted-FX list, and expected festivities, we could see multiple forces pressuring inflation rate higher. As a result, we estimate headline inflation to be sticky between 11.0% and 11.4%, averaging 11.3% in H2-19. Additionally, following the President’s pledge to not interfere with the price of PMS, energy prices might not receive a significant upturn this year.

The National Bureau of Statistics (NBS), says the total value of capital importation into Nigeria stood at $5,854.38m in the first quarter of 2020....
Read more
- Advertisement -