Canon has partnered with the Kenya Film Commission, established by the Kenyan government in 2005, to promote the Kenyan film industry locally and internationally. The collaboration aims to raise awareness of the importance of the film and photography sectors in Kenya, to support their development by facilitating access to the brand’s latest innovative technologies and cameras, and to support job creation in Kenya.

Canon, which has been present on the continent for more than 50 years, is committed to supporting the sustainable development of African countries. Since the education and training of youth is key to unlocking further development in Africa, Canon, through the Miraisha Programme launched in 2014, is enhancing initiatives that help young people learn and develop skills. One of the objectives of the Miraisha Programme is to support the development of employment in key African markets while promoting local sustainability.

It is in this context that Canon decided to partner with the Kenya Film Commission. The focus of this collaboration is to help young people develop their creativity, provide them with the skills they need to facilitate their professional integration in East Africa and wider pan, as well as help them seize international opportunities. To achieve this, the programme matches young Kenyans with professional talents who can share their knowledge of the film industry and give them access to their deep experience. 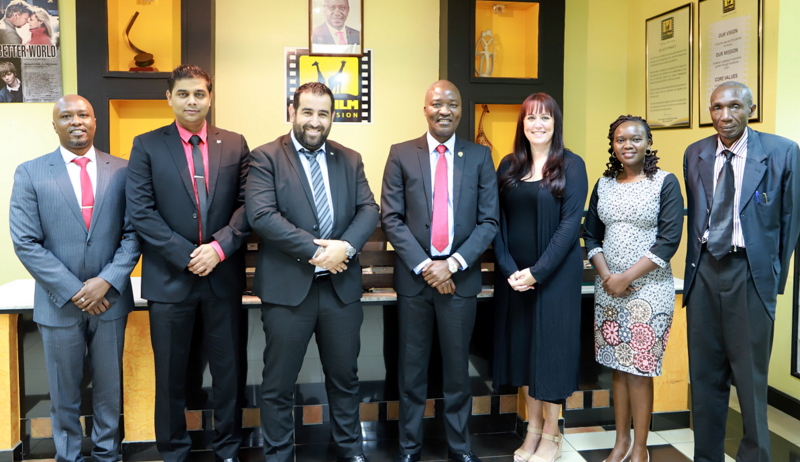 In concrete terms, Canon and the Kenyan Film Commission want to undertake various short-term training workshops in 6 different counties in order to hone the skills of young filmmakers, improve local production, and support the sustainable development of the film and television sector. At the end of the course, students will have learned how to write, shoot, and edit a short film in 6 days.

For each of the 6 programmes planned, the Kenyan Film Commission will be responsible for selecting 30 students (aged 18 to 35) who are interested in cinematography in each county.

Canon will provide a certified trainer for the workshops and will offer the technical equipment required to complete the projects. This program will train 180 students who will receive a certificate of participation and will allow the production of 6 films per county of 3 to 5 minutes in length.

Initially, an 8-week film club programme will be implemented at 4 institutions in Nairobi. This programme’s goal is to introduce young people to film and create awareness around the film industry as a viable career path in Kenya, with the ultimate objective of offering an 8 weeks course within these institutions. At the end of the course, students will be able to understand the simple principles of film terminology and the elements of film production, as well as how to shoot basic films on DSLR cameras.

To implement this programme, the Kenyan Film Commission will offer 2 sessions out of the 8-week training to explain the Commission’s mission and purpose and present the Kenyan film industry. The Commission will support each college with 2 sets of basic film equipment so that the film club can be sustained. Canon will offer 6 sessions during the 8-week training to teach the basics of film terminology and help participants create a film using the DSLRs. At the end of this project, 120 students will have passed through the film club during the 8 weeks and each will be given a certificate of participation at graduation.

Amine Djouahra, Sales & Marketing Director – B2C, Canon Central and North Africa–, stated: “Education and training are important success factors in providing young people with the skills necessary to enter the job market, but also to help communities adapt to changing skill requirements, increase productivity and to raise a country’s skill level. Young people are the future of their country, and it is up to all of us, dynamic actors in Africa, each in our own way, to provide them with all the necessary means to help them build their future. We are very proud to lead these different projects alongside the Kenyan Film Commission and to support them in this fantastic new project, which will give greater visibility and appeal to the film sector.”

Timothy Owase, CEO of the KFC concluded: “By investing in youth, creating tangible career development opportunities, and promoting the film and photography industry through Canon’s innovative solutions, we are creating a dynamic growth ecosystem in Kenya and East Africa. We look forward to starting this collaboration, which will improve Kenya’s capacity to build and capitalize on its young and dynamic population, offering them opportunities for local success. This, in turn, will foster the development of our region through this industry. It is crucial that students receive appropriate training to be able to succeed and support their country’s economic development.”

2021 will mark 50 years since the KFC brand was introduced to South Africa. As part of the celebration of its 50-year milestone and...
Read more

Canon has announced a new and easy-to-use desktop scanner, designed with flexible USB and WiFi connectivity, to support small businesses wherever their workspace is...
Read more

The fried chicken franchise, KFC, has confessed that their slogan is a bit 'offbeat' and inappropriate for 2020 and therefore has pressed pause on...
Read more