The fourth edition of the Africa Risk-Reward Index from specialist global risk consultancy Control Risks and independent global advisory firm Oxford Economics has been released today. The report offers a comprehensive and up-to-date view of the highly-dynamic business investment landscape in Africa. The respected index tracks the evolution of the investment landscape in major African markets, and this year’s edition marks several important and intriguing trends that impact investment strategy across the continent.

The benchmark research recognises that elections in African markets can often fuel tensions and raise investment concerns. However, it also demonstrates how elections increasingly serve to stabilise Africa’s evolving political landscape. It is crucial to identify how elections can end prolonged uncertainty, provide legitimacy, and empower existing or new African leaders with the mandates required to push forward with reform or counter-reform agendas.

“Do not get carried away by enthusiastic reform promises by assuming that reform-minded ‘strong-man’ leaders can push their way through free of any constraints,” Barnaby Fletcher, Associate Director Analyst at Control Risks, warns. “The real political lesson of recent years is to not underestimate the strength of counter-reform efforts by existing political structures, as well as the complexity of the undertaking, ” he explains.

African investment has traditionally been dominated by its big economies but the long-awaited emergence of intercontinental trade blocs is shifting the balance of power. The paper explores the huge potential significance of the introduction of the African Continental Free Trade Area (AfCFTA) in late May while raising some concerns about its implementation. It also analyses the significant progress made by regional blocs such as the strengthening East African Community (EAC). 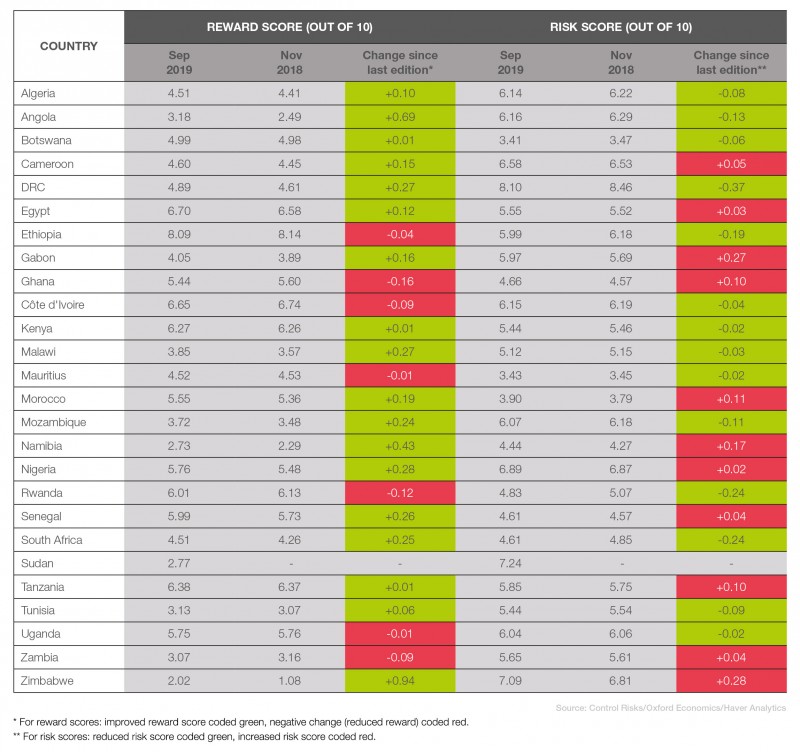 “The current edition of the index shows a slight increase in reward scores for some of the continent’s largest economies, including Nigeria, Angola, and Egypt, as the economic recoveries in these giants gain traction. However, the highest reward potential remains centred in the East Africa region, with expanding services and infrastructure development-boosting demand and improving business environments,” says Jacques Nel, Chief Economist Southern & East Africa of Oxford Economics.

The comprehensive paper also tackles common misinterpretations of the external influences affecting African economies. Africa is no longer an even battlefield for US and Chinese players as commonly thought. Current US-Africa totals USD 39bn, while China-Africa represents more than USD 200bn, and EU-Africa trade is now over USD 300bn according to data revealed in the paper. The research also notes a surge of interest in Africa from smaller geopolitical players such as Russia, the Gulf states, Turkey, and India.

Read Also:  Nigeria Heads Up By Four Places To 114 In Global Innovation Index

“The standard narrative of US-China rivalry in Africa had always looked like an over-simplification but is certainly outdated now. China’s engagement with Africa is undergoing a fundamental shift, the US is playing catch-up, and a host of other countries are seeking to expand their influence in an increasingly multipolar landscape,” explains Barnaby Fletcher, Associate Director at Control Risks. “Geopolitical objectives are being supported by a flood of development finance, creating both opportunity and competition for private-sector players.”

Africa remains a desirable investment destination with a young and increasingly urban demographic, a wealth of natural resources, and a proven ability to leapfrog technologies in areas such as telecommunications or finance. The growing competition for investment across the continent is helping to promote reform, which in turn encourages greater investment. In Africa, diversification increasingly equals success and economies can no longer rely on merely holding the most mineral resources.

“Especially at a time of a trade war, which threatens to further depress Chinese demand for commodities and global demand for oil and gas, dependence on raw commodities exports is a serious weakness for an economy. It is for this reason that governments are competing to attract investment capital and firms in order to grow their manufacturing and services sectors, to supply goods and services to the many millions of Africans moving to the continent’s cities,” says François Conradie, Head of Africa Research at Oxford Economics.

For the less experienced investor in Africa, the index offers a comparative snapshot of market opportunities and risks across the continent – offering critical information for market entry strategies. For the more seasoned Africa investor, the index provides a grounded, longer-term outlook of key trends shaping the investment landscape in major African economies. The Africa Risk-Reward Index goes beyond the headline-grabbing news and noise surrounding the topic to provide an informed view on investment into Africa.

In the latest episode of Connecting Africa, CNN International’s Eleni Giokos explores how Africa’s telecommunications industry is transforming business and gearing up for a...
Read more