Aliko Dangote $20m Transformative Donation To The African Center Focused On Accelerating Change In Global Narratives About Africa In Policy, Business And Culture

Peeved with the negative perception of Africa by the outside world, Chairman, Aliko Dangote Foundation, Aliko Dangote, on Monday, September 23, 2019, made a philanthropic donation of $20 million to The Africa Center in New York, the United States of America towards reversing the trend.

Africa Center is a leading non-profit institution focused on challenging historical stereotype around the African continent and a hub for creating an intersection of African policy, business, and culture and recreating narratives about Africa’s economic and cultural significance today and into the future.

Sharing in Dangote’s vision, the Bill & Melinda Gates Foundation, also announced a new $5 million grant at the Future Africa Forum. The Gates Foundation grant is directed to the Center’s capital campaign and for the development of its policy initiatives.

Other foundations, corporations, and individuals that provided leadership support for the capital campaign, including the Mo Ibrahim Family, and the New York City Department of Cultural Affairs, were also recognised at yesterday’s event, which marked the conclusion of the second phase of construction. 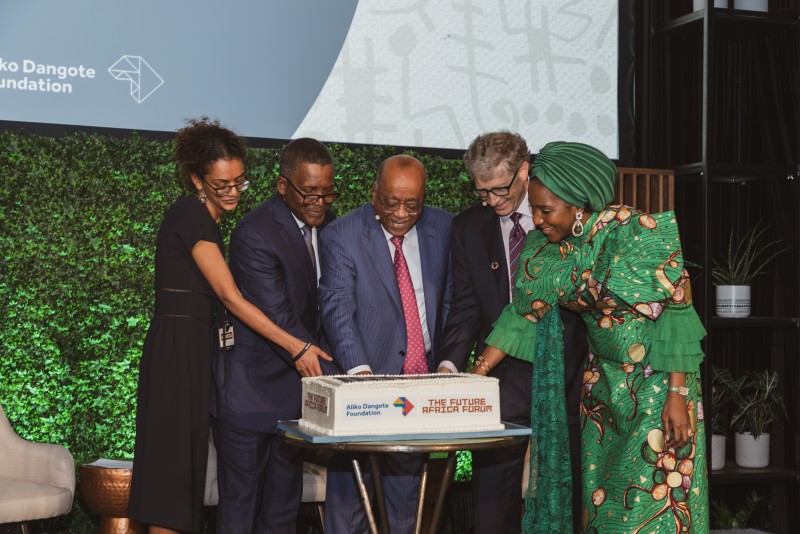 In recognition of his love and unusual passion for the continent, Dangote was honoured as the main hall of The Africa Center, was named after him.

Named “The Africa Center at Aliko Dangote Hall”, speakers at the event which was part of The Future Africa Forum, praised the efforts of Dangote describing his various philanthropic interventions in Africa and beyond as very significant. The Forum was this year’s signature policy and business dialogue event of The Africa Center in partnership with the Aliko Dangote Foundation.

Dangote, Africa’s leading entrepreneur had announced that the donation was towards the completion of the second phase of the Africa Center’s physical space, which he described as transformative, thus enabling the Center to accelerate its capital campaign, to further activate its public spaces and programming, and support ongoing operations.

On why he made the landmark donation, Dangote said the donation through the Aliko Dangote Foundation is focused on supporting The Africa Center’s work in transforming global understanding of the continent and promoting partnership and collaboration between Africa and the rest of the world.

Said he: “the Africa Center is showcasing Africa in a contemporary, multifaceted manner as a centre of innovation, growth, and limitless potential, which makes this project extremely important and worthy of support through my foundation.

“There is an opportunity to establish new narratives about Africa today, with its unrivaled mix of people, ideas, and resources, which are both its greatest strength and the basis for its tremendous, untapped promise. The connections The Africa Center will make between Africa, the United States, and the rest of the world, including members of the Diaspora, are needed more now than ever before.”

In her remark, President of the Center and a Group Executive Director of Dangote Industries, Halima Aliko Dangote, who is also leading the Center’s successful capital campaign, described The Africa Center as an important gateway to understanding contemporary and future Africa and Africans.

Expressing appreciation towards the landmark gesture, the Chief Executive Officer of the Africa Center, Dr. Uzodinma Iweala said the Center was proud of the humongous support of the Aliko Dangote Foundation and the Dangote Family, whose vision for the future of the African continent is perfectly aligned with The Africa Center’s mission to advance African policy, business, and culture of the 21st century

He stated “We are profoundly grateful to the Aliko Dangote Foundation, the Mo Ibrahim family, the Bill & Melinda Gates Foundation, and all those whose generosity is enabling us to realise our plans to create a vibrant and essential centre of ideas and action focused on the 54 nations and people of Africa and its Diaspora.

According to him, since launching its public programming in January 2019, The Africa Center has attracted and engaged thousands of visitors in a series of inaugural performances, installations, talks, readings, book signings, and film screenings.

“The Capital Campaign has received remarkable leadership support from institutions and individuals that recognise the role it has to play in building bridges between cultures in a globalised world village. That support has enabled us to complete the first two public spaces and activate them with programming that has already proven to be compelling and popular among our local community.

“We are building on this momentum by reaching out to additional business leaders and global philanthropists and asking them to invest in the Africa Center’s mission.”

The Cultural Affairs Commissioner, Tom Finkelpearl said: “Congratulations to The Africa Center on the announcement of this extraordinary gift from the Aliko Dangote Foundation and the conclusion of another phase of construction, marking the latest milestones for this important addition to NYC’s cultural landscape.”

“The City is pleased to have contributed over $4 million in public capital support for the Center, which is already offering vibrant programming that solidifies NYC’s connections with contemporary Africa and provides a new anchor for Museum Mile at the northern end of Central Park.”

The Africa Center is transforming the world’s understanding of Africa, its Diaspora and the role of people of African descent in the world; serving as the hub for the exchange of ideas around culture, business, and policy related to the continent, and in the spirit of collaboration and engagement with individuals and institutions who share the Center’s values.

The Africa Center inspires enthusiasm, and advances thought and action around Africa’s global influence and impact on the inhabitants’ collective futures. This mission is guided by a leadership team that includes Board President Halima Aliko Dangote, Board Co-Chairs Hadeel Ibrahim and Chelsea Clinton, and CEO Dr Uzodinma Iweala.

The Africa Center’s physical presence on Fifth Avenue at the intersection of Harlem and the Museum Mile is a location that embodies the dynamism and diversity of Africa and its Diaspora in the heart of New York City. Caples Jefferson Architects (CJA) was engaged in 2016 to design the facility, responding to The Africa Center’s ethos as an experimental, inclusive institution fostering business, policy, and cultural exchange locally and globally.

The Africa Center is a platform for sharing new ideas and strategies that challenge the structures and systems that support one-dimensional narratives of the continent, and that inform policies and ultimately affect the lives of African people, those of African descent, and the future of Africa.

The performance of equity markets across the world was a tale of two quarters in H1-2020. This was as...
Read more
Real Estate

The Lagos State Government has urged property owners and developers in Lekki, Ajah and Eti-Osa environs to comply with the Masterplan of the area...
Read more
News