Three Crowns Flags off Mum of the Year 2019 Campaign, Set to Sponsor 3 Winners to Dubai

Three Crowns Milk, Nigeria’s dairy brand and product from the stable of FrieslandCampina WAMCO, has commenced its search for 2019 Mum of the Year. This year’s edition, just like last year, will crown three Nigerian mothers as winners of the competition and reward them with an all-expense-paid trip to Dubai. 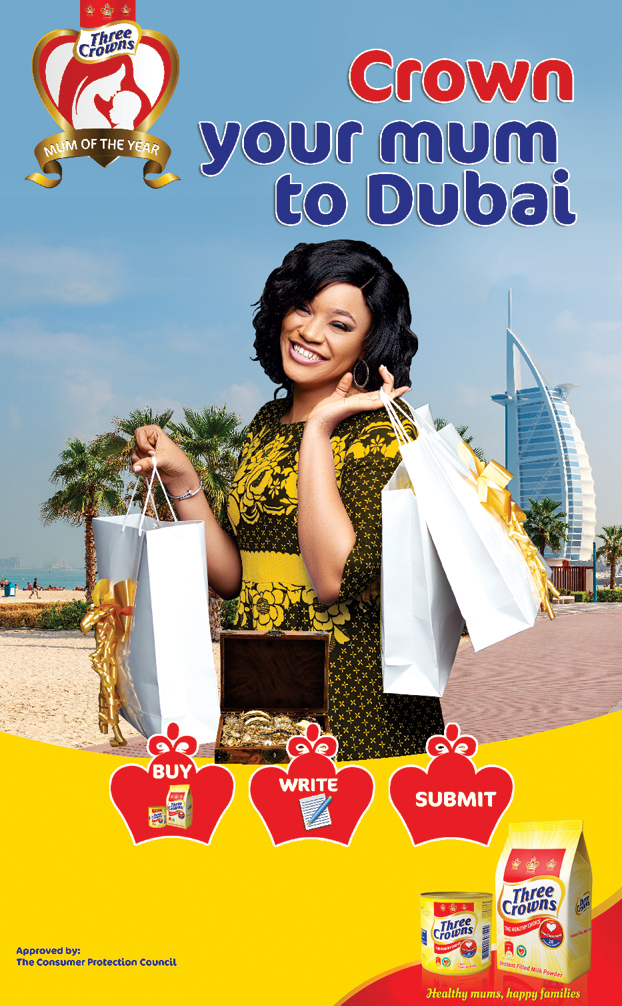 She confirmed to journalists in Lagos that the competition was designed to put the spotlight on mothers by recognizing the unique role they play in ensuring healthy nutrition for the family.

“As a brand, Three Crowns Milk cares for mothers’ hearts so that they can in turn care for their families. This is the essence of Mum of the Year campaign. One of the key things that we have identified is that the foundation of any family and heart of every home is the mother and for her to be a solid foundation, she needs to stay fit and healthy which is what Three Crowns Milk helps her achieve. We strongly believe that if the pillar of the house, the mother is healthy, the whole family would be happy” Banjoko said.

Three Crowns Mum of the Year campaign debuted in 2015 when Olamide Olaleye emerged winner, followed by Nkechi Brayila who won in 2016, while Oluwakemi Longe was crowned Mum of the Year in 2017.

In 2018 and in commemoration of its 30 years anniversary, Three Crowns raised the stake of the competition by awarding the grand prize to three winners; Jennifer OtoGod, Pauline Pambolo Daniel and Adaobi Okonkwo. They were each rewarded with an all-expense paid a vacation to Dubai with 2 members of their families and a year’s supply of Three Crowns Milk.

Banjoko announced that this year, family and friends only need to follow three simple steps: “BUY, WRITE and SUBMIT” to participate in the competition.

“Interested participants are expected to buy a range of Three Crowns Milk products; either two units of 350g refill pouch, six units of Evap 160g or two rolls of 12g sachet. They are then to write a short story on why their mum is the best and deserves a grand holiday.

“The story writes up, names, pictures of nominated mums alongside empty packs of the Three Crowns Milk products will then be submitted to the brand website https://www.femininelounge.com/threecrownscompetition or on WhatsApp 08036847790 or in selected stores” Banjoko explained.

She said that nominations could be made in person or through friends and family, adding that the more you buy and submit, the better your chances of being shortlisted to win.

All entries received would be screened while shortlisted contestants would be invited for the grand finale for a competition to determine the winners of the 2019 competition. The judges for this year’s edition of the grand finale include top Nigerian celebrities and popular fitness coaches.

Since 1988, Three Crowns Milk has nourished consumers in ways that promote healthy eating habits and active lifestyles so that mothers and their families remain healthy.

As the heart-friendly milk, Three Crowns Milk is the only Nigerian dairy brand endorsed by the Nigerian Heart Foundation as it continues to celebrate every mum as the heart of the home.

Cardiac community, a not for profit organization increasing awareness of the cardiovascular disease and encouraging heart health organized the second edition of its annual...
Read more