BEIJING, CHINA – Media OutReach – 17
December 2019 – Qatar Airways has elevated the Economy Class experience
with the launch of its new ‘Quisine’
dining service aboard flights to and from China. 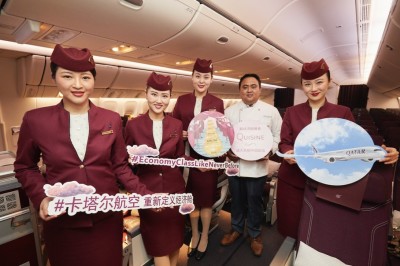 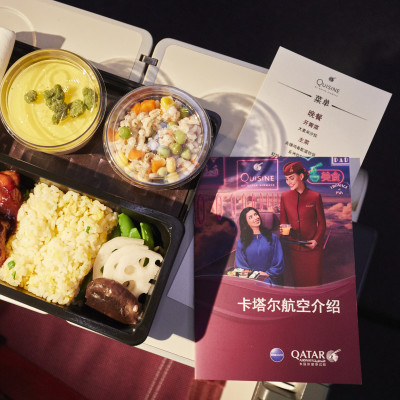 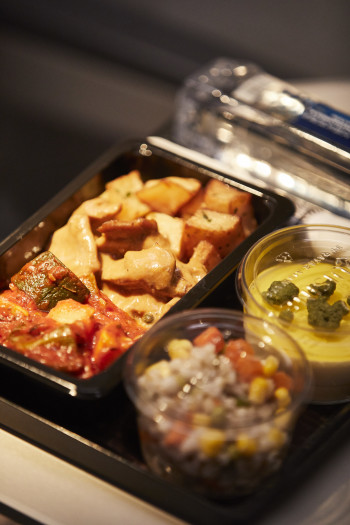 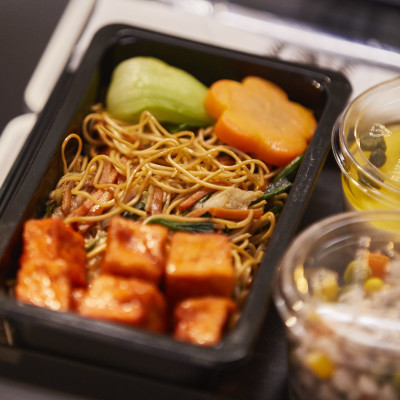 The
national carrier of the State of Qatar has recognised the emerging trend of its
travellers being more aware of their dietary needs and expressing interests in
healthier food options. Qatar Airways supports its customers’ desires and will
now feature fresh, healthy seasonal ingredients and localised menus.

‘Quisine’ is now presented on flights
from all seven China destinations including Beijing, Shanghai, Guangzhou,
Chengdu, Hangzhou, Chongqing and Hong Kong to its Middle East hub in Doha.

Premium items usually served only in Business
and First Class are also extended to the ‘Quisine’ economy class service — such
as Godiva chocolate, sparkling wine and myriad cocktail choices.

Meals for children feature a menu of
favourites chosen from a study group of kids from 15 nationalities — including
healthy juices, snacks and fruits packaged in a fun box, complete with a
surprise toy to delight young flyers.

As part of Qatar Airways’ commitment to
the environment, the presentation of ‘Quisine’ also focuses on reducing
single-use plastics, with an 80 per cent increase in recyclable and
biodegradable products.

“Qatar Airways is thrilled to
introduce a whole new on-board dining experience that will push the boundaries
of economy travel for our esteemed passengers. Every new concept was designed
and produced with the highest attention to taste, seasonality, detail and
quality, to meet the exacting standards of our passengers,” said Qatar Airways’ North
Asia Vice President Joshua Law.

“Qatar
Airways is collaborating closely with local farms and suppliers to produce
products for our specific needs, promoting a ‘farm-to-table’ approach. Our
in-flight dining menus are designed to align with the four seasons, better
incorporating the use of locally-grown produce and tapping into authentic foods
of local provenance delivering the very highest international standards. This
in addition to the pre-dinner
drinks and our larger portion sizes ensure we continue providing
passengers a premium dining experience in Economy Class,” added Mr. Law.

‘Quisine’ has been rolled-out globally in
phases across the Qatar Airways network of more than 160 destinations worldwide
over the past two months.

The national carrier for the
State of Qatar currently operates a modern fleet of more than 250 aircraft via
its hub, Hamad International Airport (HIA) to more than 160 destinations
worldwide. The airline has launched a host of exciting new destinations in
2019, including Lisbon, Portugal; Malta; Rabat, Morocco; Davao, Philippines;
Izmir, Turkey; Mogadishu, Somalia and Langkawi, Malaysia. Gaborone, Botswana
will be added in 2019 and Luanda, Angola; and Osaka, Japan will be added to the
airline’s growing network in 2020.

Qatar
Airways, the national carrier of the State of Qatar, is celebrating more than
20 years of Going Places Together with travellers across its more than 160
business and leisure destinations on board a modern fleet of more than 250
aircraft. The world’s fastest-growing airline has added a number of exciting
new destinations to its growing network this year, including Lisbon, Portugal;
Malta; Rabat, Morocco; Davao, Philippines; Izmir, Turkey; and Mogadishu,
Somalia; and will add Langkawi, Malaysia and Gaborone, Botswana, later in 2019.

A
multiple award-winning airline, Qatar Airways was named ‘World’s Best Airline’
by the 2019 World Airline Awards, managed by international air transport rating
organisation Skytrax. It was also named ‘Best Airline in the Middle East’,
‘World’s Best Business Class’ and ‘Best Business Class Seat’, in recognition of
its ground-breaking Business Class experience, Qsuite. Qatar Airways is the
only airline to have been awarded the coveted “Skytrax Airline of the Year”
title, which is recognised as the pinnacle of excellence in the airline
industry, five times.

Qsuite,
a patented Qatar Airways product, features the industry’s first-ever double bed
in Business Class, as well as privacy panels that stow away, allowing
passengers in adjoining seats to create their own private room, a first of its
kind in the industry.

Qatar
Airways was the first Gulf carrier to join global airline alliance oneworld,
enabling its passengers to benefit from more than 1,000 airports in more than
160 countries, with 14,250 daily departures.

Oryx
One, Qatar Airways’ in-flight entertainment system offers passengers up to
4,000 entertainment options from the latest blockbuster movies, TV box sets,
music, games and much more. Passengers flying on Qatar Airways flights served
by its B787, B777, A350, A380, A319 and select A320 and A330 aircraft can also
stay in touch with their friends and family around the world by using the
award-winning airline’s on-board Wi-Fi and GSM service.

Qatar
Airways proudly supports a range of exciting international and local
initiatives dedicated to enriching the global community that it serves. Qatar
Airways, the official FIFA partner, is the official sponsor of many top-level
sporting events, including the FIFA 2022 World Cup, reflecting the values of
sports as a means of bringing people together, something at the core of the
airline’s own brand message – Going Places Together.