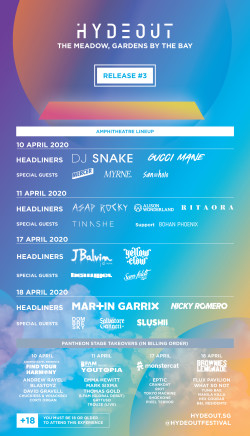 Tastemakers can look
forward to a multi-genre wonderland with three more esteemed international
artistes joining Hydeout’s already stacked line-up on Weekend One (10-11 April 2020).
Among the special guests include French DJ and producer Mercer, bringing his infectious disco-influence remix to the crowd;
and Los Angeles singer, songwriter and producer Tinashe who will be
performing in Singapore for the first time. The 26-year old recording artiste
recently released her third album, Songs For You — following her
chart-topping singles of ‘Die A Little Bit’, ‘2 On’ and ‘Faded
Love’. Chinese-born U.S.-based rapper Bohan Phoenix will also
join the line-up as a supporting guest with his harmonious bilingual rhymes
inspired by his salient East-West identities. The rapper has been making waves
on the global hip-hop scene with popular releases such as ‘The Prince’,
‘Overseas’ and ‘Angels’.

Also making her
Singapore debut alongside headliners A$AP Rocky and Rita Ora on 11 April is Alison
Wonderland
— who promises to deliver her intensely raw, personal lyrics, blended with her
digitally rendered beats in a true wonderland style. With her niche combination
of cello, trap, bass and electro elements in her melodious tracks, fans can
look forward to grooving to Wonderland’s versatile tunes and greatest hits like
‘I Want U’, ‘Run’ and ‘Church’.

Joining the list of powerhouse artistes headlining
Hydeout’s Weekend Two (17-18 April 2020) is Colombian
reggaeton sensation J Balvin. The global superstar needs no introduction with a
number of huge tunes to his name on the world stage, including ‘6 AM’, ‘Ay
Vamos’ and his global smash
hit ‘Mi Gente’ featuring J Willy. As one
of the most streamed artistes globally on Spotify, Balvin’s success includes a
handful of collaborative singles including ‘Machika’ with Jeon and Anitta;
‘X’ with Nicky Jam; and Cardi B’s ‘I Like It’ with Bad Bunny. Other notable J
Balvin collaborations include ‘I Can’t Get Enough’ with
Benny Blanco, Tainy, and Selena Gomez; and DJ Khaled’s ‘You Stay’.

He will be joined by
an exciting
mix of special guests including American
acclaimed singer-songwriter Bea Miller and her multi-genre electronic-inflected pop music. The 20-year-old wunderkind has come a long way since
her journey through a number of world stages including ‘The X Factor’ and her cover songs on YouTube breaking the 200 million
view mark. Creating music that’s truly her own, the personality-driven pop star
has achieved significant stardom with a number of chart-topping hits like ‘I
Wanna Know’ with NOTD, and ‘Fire n Gold’ from her debut EP
in Young Blood which was used in several promos for ABC Family and Netflix
shows’ commercials. Other special guests include rising French dance music
producer Dombresky with his innovative and experiential style that has
lifted new dimensions to the house music scene in his hit tracks ‘Utopia’, ‘Soul Sacrifice’ and
‘Simple Hit’; and the bizarre on-stage antics by
Bosnian-born Swedish DJ Salvatore Ganacci with his
impeccable musical framework in popular tracks like ‘Dive’, ‘Horse’ and ‘Money In My
Mattress’ to match his highly animated set.

Also making his
highly anticipated debut in Singapore at Hydeout is American electronic dance
music producer and DJ Julian Scanlan, better known by his stage name Slushii.
The esteemed 22-year old Los Angeles-based music producer first made waves
on the community by remixing songs by Zedd, Alan Walker and The Chainsmokers.
Since then, he has taken the hearts of many with his innovative tracks
dedicated to his evolving musical influence featuring light-hearted, future
bass sound, heavy dubstep and lo-fi tunes, earning the support of some of the
biggest players in the scene including Skrillex and Marshmello.

Read Also:  Yeedi Launches Easy to Use and Powerful Robot Vacuum Cleaner in the US Market

Read Also:  Microsoft to Establish Its First Datacenter Region in Taiwan as A Part of Its "Reimagine Taiwan" Initiative 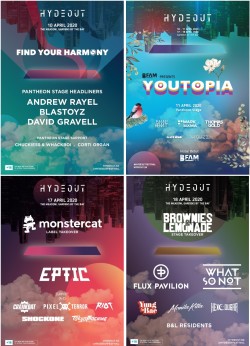 With a number of
multi-stage showcases set against the backdrop of the lush greenery at Gardens
by the Bay, festival-goers can look forward to another highlight at Hydeout’s
very own Pantheon Stage — which will host the highly-anticipated stage
by stage takeovers by Andrew Rayel – Find Your Harmony, BFAM, Monstercat and
Brownies & Lemonade.

Dedicated to the celebration of
multi-genres and an intersection of storytellers, musicians and innovative
lyricists, the debut edition of Hydeout will carry crowds into a musical bliss
with Andrew Rayel – Find Your
Harmony’s trance empire on Day 1 (10
April). The first-ever stage takeover will feature trance giants like Andrew
Rayel, Blastoyz and David Gravell, with supporting guests Chuckiess
& Whackboi and Corti Organ taking the decks on the trance day
marathon.

While BFAM will launch Youtopia on Day 2 (11 April) —
festival goers can look forward to a stage of unifying cultures featuring
an assembly of established artistes like Emma Hewitt, Mark Sixma, Thomas
Gold, B.FAM (Global Debut), Gattuso and Trouze (Live); in a truly
East-meets-West collaborative performance. Expect to witness artistes wearing
unanticipated hats with live collaborative sets, and the debut of a new genre
and cross-continent artiste projects seamlessly weaved into one world.

Fans can also look forward to one of
the world’s indisputable trap music trailblazers taking over Day 3 (17 April) —
Monstercat,
which has championed some of the world’s powerhouse music producers like
Marshmello and Krewella. Amassing a global fanbase over the last eight years
with an evolving electro-gaming tune amidst the rise of e-sports in recent
years, Monstercat will be making its official debut in Singapore with uplifting
artistes like Eptic, Crankdat, Riot, Tokyo Machine, Shockone and Pixel
Terror taking the stage.

With vested interests in hip-hop and
electronic dance music since 2012, Brownies & Lemonade (B&L) has
innovated curated stages, earning international recognition at world renowned
festivals from Coachella to Lollapalooza. Having housed some of the biggest
names in history including Skrillex, Diplo and many more, expect a star-studded
stage takeover on Day 4 (18 April) with an intimate showcase by Flux
Pavilion, What So Not, Yung Bae, Manila Killa, Hex Cougar and B&L
Residents.

Venue: The Meadow, Gardens by the Bay

Introducing the region’s first multi- genre
music festival, Hydeout allures and gathers every tastemaker for the most
extraordinary music revelry. More than just a music festival that promotes a
universal passion for music, Hydeout is a celebration of a multi-elemental
music scene that tells a story of free-spirited adventures. Over two weekends
in April, the festival will feature four days of international and regional
artists showcases from various genres in a re-imagined arena. Experience what
it feels like to be truly free as the sun goes down.

Sequel to the Board Meeting of May & Baker Nigeria Plc held on Thursday, 26th November 2020 at the...
Read more
Business & Economy

Despite challenges due to the pandemic, 19 out of the top 22 FMCG companies in China grew their shopper base this year. The top 22...
Read more
- Advertisement -