The Unappreciated Legacy Of African-American Inventors

History-making black scientists and inventors should be honoured as much for the lives they lived as for the things they invented.

EACH FEBRUARY, IN observance of Black History Month in the United States, we revisit the stories of notable African Americans. Lists of these prominent individuals and their contributions serve as powerful testimonials to black ingenuity. And within this impressive group, African-American scientists and inventors hold a special place.

They are a particular interest of mine, as a scholar studying the intersection of African-American history and the history of science. They also were exceptional in their time. Succeeding in science and technology in 19th- and 20th-century America despite the long odds imposed by racial oppression, black inventors represented the epitome of intellectual achievement.

By the early 19th century, James Forten of Philadelphia is believed to have invented a device that improved sailing and was running his own prosperous sailmaking business. He used his wealth to campaign for the abolition of slavery. By the early 21st century, engineer Lonnie Johnson had worked for the Air Force on the stealth bomber program and for NASA on missions to Saturn and Jupiter and had obtained dozens of patents—including one for the Super Soaker water gun. In the decades bracketed by those two inventors, scientific discoveries by black Americans have helped make this nation and its people what we are today.

These trailblazers lived complex lives in complex times. Yet in our eagerness to honour them, too often we privilege their inventions over their humanity. Imagine how much more we might gain from knowing them as fully realized individuals, not just as the sum of their inventions. The emphasis on the latter took root—with only good intentions—in an early effort to honour African Americans’ achievements, about a century ago.

The early decades of the 1900s witnessed the close of the Great War, the greed and opulence of the Roaring Twenties, and the resurgence of vigilante violence targeting African Americans. D.W. Griffith’s 1915 film The Birth of a Nation stoked racial fears in the United States, even as it was screened twice in President Woodrow Wilson’s White House. The film fueled segregation and white supremacy efforts around the country; the Ku Klux Klan terrorized African-American communities and stirred savagery in which fires were set and black citizens killed.

Faced with subjugation and brutality, African Americans needed inspirational examples, models of achievement to follow. Black leaders wanted white Americans to see inspiring figures too, to counter the pernicious stereotypes popularized by the likes of Griffith. Taking on this mission was historian Carter G. Woodson, who in 1926 established Negro History Week, the precursor to today’s Black History Month.

By reclaiming a positive role for African Americans in U.S. history, Woodson thought, perceptions of racial inferiority could be challenged. And the effort would encourage African Americans to believe that they too could be productive and valuable in a society that had yet to cede the space for their success.

In the early iterations of Black History Month, successful African Americans were intentionally reduced to their accomplishments—patents, inventions, and contributions easily digested by a wider public. George Washington Carver is one example among many.

And so it is that a figure like Carver—who was born to slaves near the close of the Civil War, developed hundreds of uses for the peanut, sweet potato, and soybean; helped reshape the South’s agrarian economy; earned international acclaim for his work, and advised the nation’s leading politicians on agricultural matters—is perhaps best known as the man who invented peanut butter. (Contrary to popular belief, peanut butter was not among his innovations.) By reducing Carver to the sum of his inventions, we discard many of the lessons his life could teach us.

Likewise, the charismatic Madam C.J. Walker was known first for her hair products, and second, for the fortune, they made her. But by the time she died in 1919, she was gaining recognition for her philanthropy and political activism as well as her products and business acumen.

There are signs that, in the 21st century, popular representations of black inventors and scientists are beginning to shift. For instance, Carver has recently been embraced not only as a black historical icon but also as an LGBTQ icon (some biographies suggest he was bisexual)—bringing to light new questions about his legacy and broadening his inspirational appeal.

In a shift of another sort, historians now report that Granville Woods, long heralded as a great African-American inventor, was in fact a native of Australia and did not consider himself to be (in the parlance of the times) “a Negro American.” His legacy raises new questions about racial and ethnic identity and who we commemorate during Black History Month.

With The Immortal Life of Henrietta Lacks, author Rebecca Skloot has drawn long-overdue attention to the black patient whose cancerous cervical cells were essential to the biotechnology boom and ensuing developments in the biomedical sciences. Margot Lee Shetterly’s popular book turned movie, Hidden Figures, highlighted the cadre of NASA’s black women “computers” essential to the United States’ Cold War pursuit of space exploration. And a Netflix miniseries is telling Madam Walker’s life story based on a book by her great-great-granddaughter, A’Lelia Bundles.

Such popular works depart from the early mythmaking projects of black history. They tell black inventors’ success stories—but in the context of their wider lives and their hardships, from interpersonal racial and gender violence to the structural violence of segregation and scientific exploitation.

There is power in human stories. Humanizing our Black History Month icons doesn’t make them any less impressive—only more relatable. Once we do, we may find new historical uses for the black inventor, and breathe new life into human beings that history left behind.

In the early 1900s, two African-American women inventors with both science and business acumen—Madam C.J. Walker and Annie Turnbo Malone—developed products that made them fortunes. Though their rags-to-riches stories are similar, one name is widely recognized and the other is nearly forgotten. 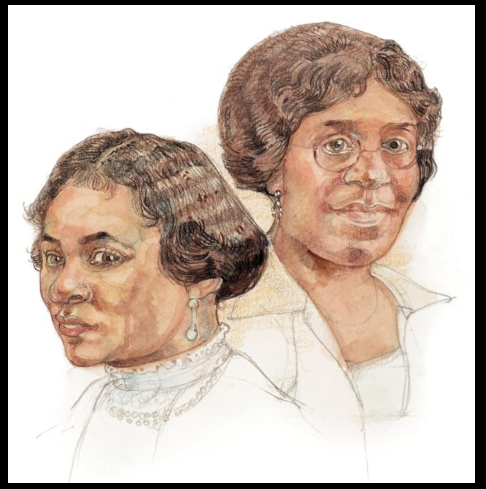 Both were born to formerly enslaved parents. Both got their start in St. Louis, catering to underserved consumers. Skilled in chemistry, Annie Turnbo was in her 30s when she started experimenting with hair products, which led to a hair and scalp formula gentler than other products black women had been using. Sold door-to-door, her products were a hit; she expanded production, opened a school for black cosmetology, and franchised sales in other countries. She married and became known as Annie Turnbo Malone.

Sara Breedlove, a widow who had experimented with treatments for her own hair, got a job selling Malone’s products in St. Louis and then in Colorado. Out West, she developed her own hair product to sell under the new name she took: Madam C.J. Walker. The onetime mentor and mentee became market rivals.

A 1917 New York Times Magazine article labelled Walker the wealthiest Negro woman in the city. She’s often remembered as the first U.S. black woman millionaire—even though, at her death in 1919, her estate was valued at about $600,000. Today Madam C.J. Walker products are still sold.

In 1920 Malone was worth an estimated $14 million. Tax disputes, lawsuits, and divorce settlements took their toll, and her company fell to creditors in 1951. She died six years later.

The COVID-19 pandemic found the countries of Sub-Saharan Africa generally ill-prepared to contain the virus or to deal with its economic fallout. First, the capacity of...
Read more