British Airways has been appointed the official airline partner of Team GB and ParalympicsGB ahead of the Tokyo 2020 Olympic and Paralympic Games this summer.

The airline will fly hundreds of athletes and support team, along with their equipment to and from the Games as part of the partnership. British Airways has been supporting British Olympic and Paralympic athletes for over a decade, since the Beijing 2008 Games.

To mark the announcement, athletes from a range of sports officially launched the partnership at London Heathrow airport. Representing skateboarding, which is being introduced at Tokyo for the first time, was 11-year-old Sky Brown who is set to be GB’s youngest summer Olympian, athlete Dina Asher-Smith, and boxer Cheavon Clarke who hopes to represent Team GB. In addition, Ali Jawad, powerlifter, Maisie Summers-Newton, Para swimmer and Alfie Hewett, wheelchair tennis player, were also in attendance and all hope to represent ParalympicsGB.

With a long-standing history in supporting national sporting events and teams, British Airways will ensure Great Britain’s medal hopefuls arrive in Japan refreshed and ready to perform at their best. The airline will fly hundreds of athletes back to the UK ready for a warm welcome at the end of the Games.

Carolina Martinoli, British Airways’ Director of Brand and Customer Experience, said: “We’re so proud to be the official airline of Team GB and ParalympicsGB for the fourth consecutive Games. The Olympic and Paralympics Games always instil a sense of national pride and it’s an honour to fly the best of British talent in sport and be part of their journey – from start to finish.” 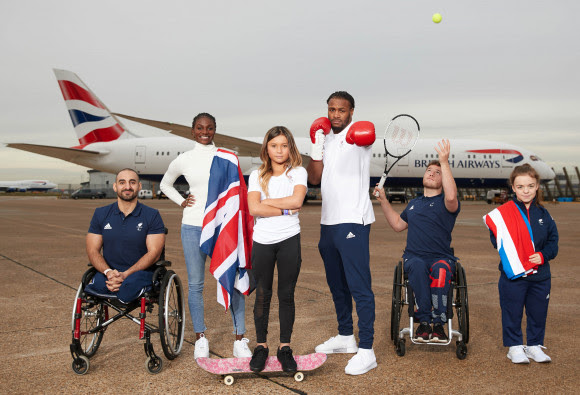 British Olympic Association CEO, Andy Anson, said: “British Airways is one of the most recognisable and prestigious brands in the world, so it is with great pride that we partner with them for the fourth consecutive Games.

“Tokyo 2020 promises to be an incredible event and securing a partnership of this calibre can only assist with our preparations ahead of the Games in July.”

Nick Webborn, Chair of the British Paralympic Association, said: “We are delighted to be flying to and from the Tokyo 2020 Paralympic Games with British Airways and believe that, once again, the ParalympicsGB team couldn’t be in better hands.

“Partnering with British Airways will undoubtedly mean that our Para athletes get the best possible start to their journey to Tokyo 2020 and a truly memorable celebratory return home.”

#ENDSARS: 10 other matters they are angering our youth which also need to be addressed with the same seriousness as police brutality

Here are 10 other matters they are angering our youth which also need to be addressed with the same seriousness as police brutality. The...
Read more
Business & Economy

Over 14Billion Naira Lost to Crisis in Southern Taraba

Chairman of the Seven-man Judicial Commission of Enquiry into the crisis between the Tiv and their Neighbours in Taraba State, Retired Justice Kummai Aka’as...
Read more
- Advertisement -

International Airlines Group (IAG) has announced changes to its senior management team with immediate effect. Formed in January 2011, IAG is the parent company of...
Read more

British Airways has announced that its final two Heathrow based Boeing 747 aircraft are scheduled to depart from the airport for the very last...
Read more

British Airways is increasing the number of destinations it serves with a larger timetable of flights for its customers. From today, long haul services will...
Read more

Four years ahead of the Games, Orange has become Premium partner and official supplier to the Paris 2024 Olympic and Paralympic Games. The partnership...
Read more
- Advertisement -