The Special Adviser to the governor of Lagos State Engr. Aramide Adeoye has disclosed that the vision of the administration of Governor Babajide Sanwo-Olu is to uplift the Lagos State Public Works Corporation to a strategic One-Stop Shop for road construction outfits in Lagos and environs. The Administration is poised to increase the capacity of the Corporation’s workforce and equipment to meet the modern standard in road construction, rehabilitation and maintenance. 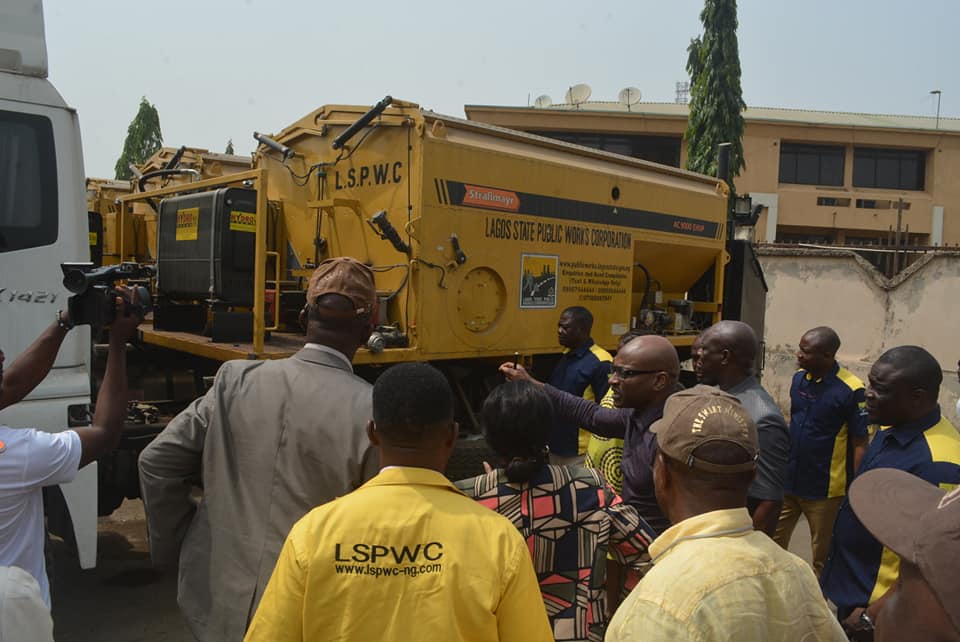 This was disclosed today by Engineer Aramide Adeoye when she paid an official working visit to the Lagos State Public Works Corporation at Ojodu to familiarize herself with the management, staff and the workings of the Corporation.

Engr. Aramide expressed her appreciation to the Lagos State Public Works Corporation and its entire staff for waking up effectively to the call on the implementation of Zero Tolerance to Pot Holes in the state. She noted that though the State has invested in quality equipment and deployment of staff for the agency’s operation, there is a need to continue the teamwork approach and further improve the quality of delivery especially in terms of input sourced from vendors. She promised the State Government will provide more capacity development to further sharpen the skill of staff of the agency and enhance their ability to perform better.

She expressed the State Government’s desire for LSPWC to be positioned as a formidable State Construction outfit and replicate the Lagos State excellence emblem in terms of quality equipment, personnel and deployment of technological know-how in all aspects of road construction.

The Permanent Secretary Ministry of Works and Infrastructure Engr. Olujimi Hotonu in his remark appreciates the good work of LSPWC as reflected in the change of narratives about Lagos roads from July 2019 to date. He stated that LSPWC is an integral part of Ministry of Works and Infrastructure and commended the management and staff of the agency for working day and night to ensure the Zero Tolerance for Potholes campaign is effectively being implemented.

Earlier in his welcome address, the General Manager of LSPWC Engr. Olufemi Daramola expressed delight on the quality and quantum of support the Corporation has enjoyed from the Special Adviser and the Permanent Secretary in the last few months of leading LSPWC.

He informed the Special Adviser and his team how the Corporation has been able to manage human and material resources to make Lagos pothole-free. He further stated that the Corporation is working on having its own functional laboratory as well as standard stationery and mobile workshop to boost the quality of input and maintenance of its equipment and machines.

The Special Adviser and the Permanent Secretary later took a tour of the facilities and equipment within the LSPWC premises.

The visit is one of the activities of the program "Bilateral investment cooperation between SAPA Thale Group and Bosnia - Herzegovina Government and leading...
Read more
Brand News

OVH Energy Marketing, a licensee of the Oando retail brand, has restated its commitment to reshaping the fuel’s retail landscape. The company made this...
Read more
Brand News

The Islamic Development Bank (IsDB) has priced its largest Sukuk issuance ever, raising US$ 2 billion in 5-year Trust Certificates under its US$ 25...
Read more

OVH Energy Marketing, a licensee of the Oando retail brand, has restated its commitment to reshaping the fuel’s retail landscape. The company made this...
Read more

The Islamic Development Bank (IsDB) has priced its largest Sukuk issuance ever, raising US$ 2 billion in 5-year Trust Certificates under its US$ 25...
Read more

The 6th agrofood & plastprintpack Nigeria 2020 is set to feature over 120 global technology leaders from 29 countries, who will showcase adapted technologies...
Read more