The Taraba State government has commenced the construction of the first-ever flyover in Jalingo, the state capital to ease traffic congestion in the emerging cosmopolitan city.

Commissioner for Budget and Planning, Hon. Solomon Elisha disclosed this at a press conference in Jalingo.

Elisha said the construction of the flyover bridge at the roadblock round-about and heavy-duty truck park became necessary to ease the gridlock always witnessed at the major entry point into the city.

According to him, work on the dualization of the NYSC camp to Kpantinakpo road with a flyover at roadblock round-about which will gulp over N34bn has commenced as the contractor has been mobilised to site.

“Earthmoving equipment have arrived and work has since commenced on the dualization of the road and the flyover bridge.

“The idea to dualised the road and to build a flyover is for the future of the State because sooner or later the State capital will need a flyover as the city continue to expand with more traffic congestion being witnessed already.

“We want to follow the Jalingo master plan. Today, in Abuja and Lagos, structures are being pulled down with heavy compensation paid by the government to open up roads due to congestion and population increase. 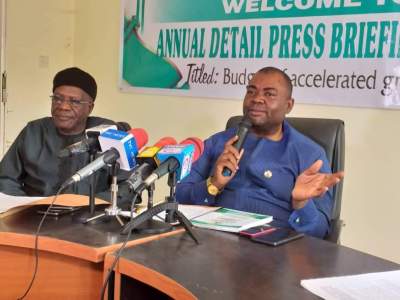 “We want to avoid this happening in the future by building a flyover now that we will not pay heavy compensation,” he said.

Also speaking, Commissioner for Information and Culture, Barr. Danjuma Adamu explained that government was about service to the people and not about profit and called on the people of the State to support the developmental plans of the Ishaku’s administration.

On the planned to the borrowing of over 70bn to finance infrastructure projects in the State, Adamu said the repayment will start in three years with minimal interest, saying the borrowing will not in any way plunge the State into a fiscal crisis.

The Information and Culture Commissioner also noted that the State government was looking inward to boost internally generated revenue (IGR) by exploring the abundant untapped resources of the State.

The Taraba state government has relaxed the 24-hour curfew imposed on Jalingo, the state capital and Wukari local government area. This was disclosed in a...
Read more
- Advertisement -