In Commemoration Of International Day Of Zero Tolerance For Female Genital Mutilation; Nigerians  Supports Legislation To End The Practice

Abuja, Nigeria. February 4th, 2020 – NOIPolls joins the world in commemorating the International Day of Zero  Tolerance for Female Genital Mutilation which is observed on 6th February every year. Female genital mutilation  (FGM) comprises all procedures that involve altering or injuring the female genitalia for non-medical reasons and is  recognized internationally as a violation of the human rights, the health and the integrity of girls and women.  According to report, about 200 million women and girls have been mutilated globally.1 In Nigeria, about 20 million  women and girls have been mutilated implying that 1 out of every 10 mutilated women in the world is Nigerian. 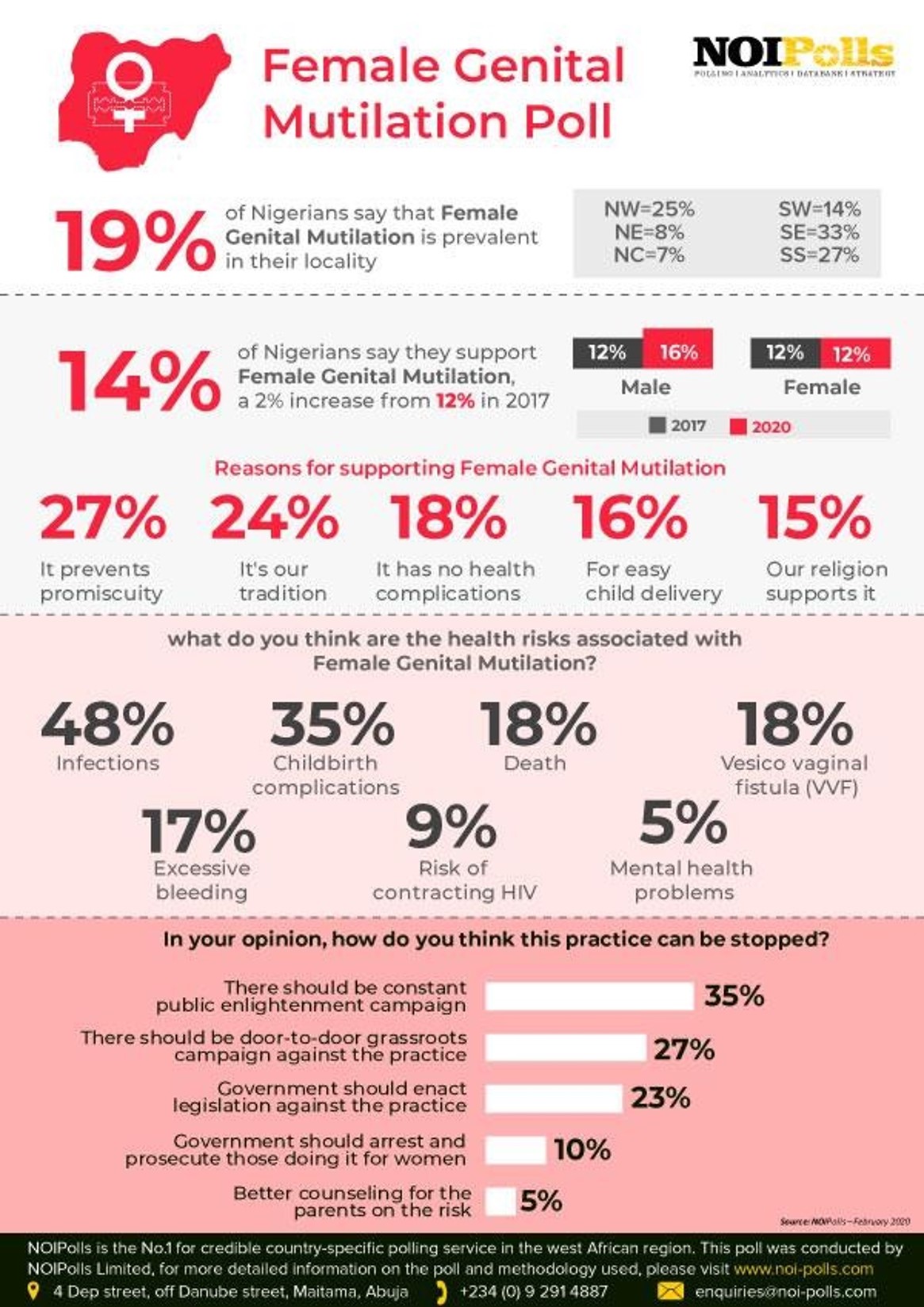 Given the above background, NOIPolls conducted a poll to assess the knowledge, attitudes, and perceptions of  Nigerians towards the practice of Female Genital Mutilation (FGM) in the country.

The poll revealed that that majority of adult Nigerians (88 percent) are willing to support a legislation to end female  genital mutilation mainly due to the health complications associated with the practice. This is in line with the effort  of the United Nations Population Fund which strives to fully eradicate the practice of female genital mutilation by  2030 as well as the Sustainable Development Goals (SDG) which prohibit any form of harmful practices against  people generally especially children and women.

Although the Violence Against Persons Prohibition Act (VAPP) was passed into law in Nigeria in 2015 to criminalise  FGM practice, lack of enforcement of the VAPP Act is an issue given that it has not been domesticated in states.  Currently, 13 out of 36 states in Nigeria have their own individual state laws expressly prohibiting FGM/C. These  states are Lagos, Osun, Ondo, Ekiti, Bayelsa, Ogun, Delta, Ebonyi, Oyo, Imo, Edo, Cross-River and Rivers however, the  VAPP Act is actively enforced in only 3 out of the 36 states in Nigeria and also in the FCT; these 3 states are Anambra,  Oyo and Ebonyi.3

Furthermore, perception on prevalence revealed that 19 percent of Nigerians disclosed that this practice is still  prevalent in the country. At the zonal level, 33 percent of respondents in the South-East, 27 percent in the South-  South and 25 percent in the North West reported the practice as prevalent in their locality. Significantly, during the  course of the survey, our analysts interviewed a couple of respondents from the South-South zone who were  planning imminent circumcision of their daughters but were dissuaded due to the survey enlightenment. Some  respondents (mainly mothers) in the South East region personally revealed that they are continuing with the  practice because they had no complications whatsoever when it was done to them while some respondents  particularly from the South West divulged that tradition demands that they carry out the practice else they may be  excommunicated in their community.

When asked of the health risks associated with FGM, most of the respondents cited infections (48 percent) and  complications during childbirth (35 percent). This corroborates reports which has shown that girls who undergo  female genital mutilation face short-term complications such as severe pain, shock, excessive bleeding, infections,

and difficulty in passing urine, as well as long-term consequences for their sexual and reproductive health and  mental health. Therefore, there is urgent need to carry out public enlightenment campaign on the dangers linked  with FGM as recommended by 62 percent of Nigerians. This can be achieved by a coordinated and systematic effort  in engaging grassroot communities and focusing on human rights, gender equality, sexual education and attention to  the needs of women and girls who suffer from its consequences. It is also important that more states domesticate  the VAPP act. These are some of the key findings from the Female Genital Mutilation poll conducted in the week  commencing 27th January, 2020.

Female genital mutilation (FGM) exacts a crippling economic as well as the human cost, according to the World Health Organization (WHO). “FGM is not only...
Read more