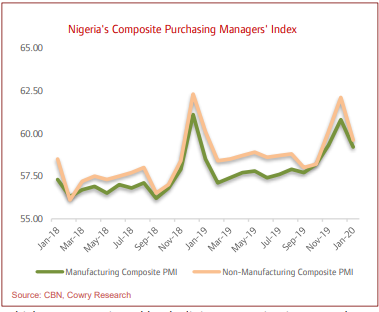 According to the survey, the manufacturing composite PMI expanded slower to 59.2 index points in January (from 60.8 in December), the seventeenth consecutive expansion. The sluggish growth in manufacturing composite PMI was due to slower expansion in production level index to 59.6 in January 2020 (from 61.8 in December 2019) which was necessitated by declining expansion in new orders – the index decreased to 59.7 in January 2020 (from 61.5 in December 2019).

Given the lower production level, slower demand and delay on delivery time, raw materials/work-in-progress expanded slower, to 59.1 from 62.4 as the producers reduced their quantity of raw materials purchased – the quantity of purchase index expanded slower, to 54.6 from 57.0. We saw the stock of finished goods reduce – its index expanded slower to 51.0 in January 2020 from 52.8 in December 2019 as producers resorted to selling inventories as opposed to manufacturing more products given the rising input costs.

The number of new hires recorded by manufacturers declined in tandem with the lower production volume – the index for employment fell to 57.3 points in January 2020 (compared to 58.0 points in December 2019). Of the fourteen manufacturing sub-sectors surveyed, only six sub-sectors (or 42.86%) recorded faster expansions, lower than the thirteen (or 92.86%) printed in December 2019.

Particularly, manufacturers of ‘Petroleum & coal products’, ‘Transportation equipment’ and ‘Furniture & related products’ registered the sharpest expansion in activities of 85.0 (from 75.8), 81.7 (from 70.0) and 68.0 (from 63.4) respectively. Meanwhile, the non-manufacturing sector recorded sustained expansion but at a slower pace as its composite, PMI fell to 59.6 index points in January 2020 (from 62.1 index points in December 2019), the sixteenth consecutive expansion.

This was driven by slower expansion in business activity and incoming business to 59.8 (from 62.6) and 59.4 (from 61.9) respectively. Business activity shrank despite the average price of inputs which expanded slower too, 51.2 index points in January 2020 (from 56.0 index points in December 2019). Service provider’s inventories reduced to, 60.4 (from 63.1) as incoming business slowed.

Similarly, employment expanded slower to 58.9 (from 60.8) amid slower business activity. Of the seventeen manufacturing sub-sectors surveyed, six sub-sectors (or 35.29%) recorded faster expansions, recording a worse performance than the fifteen (or 88.24%) it printed in December. Notably, service providers of ‘Utilities’, ‘Electricity, gas, steam & air conditioning supply’, and ‘Construction’ registered the sharpest expansion in activities of 65.6 (from 64.6), 62.5 (from 57.0) and 62.1 (from 61.5) respectively.

We note that the downward trend in composite PMIs in the first month of the year 2020 was amid a relative drop in demand from the month of December when businesses experience a high demand for products and services. We also observed that the increased selling prices of products which were induced by higher input costs could further send inflation rate northwards in January 2020. Albeit we commend CBN’s proactive move at curbing the rising inflation rate, as the increase in cash reserve ratio is expected to partly address the general increase in prices.

The Central Bank of Nigeria, (CBN) has announced plans to halt foreign currency for sugar and wheat imports, as the country tries to conserve...
Read more

CBN data show that Nigeria's gross official reserves declined by USD280m to USD34.82bn in March. In the name of accuracy, we should adjust this...
Read more

FGN Bonds The bearishness in the FGN bond market was sustained as the markets resumed this week, as market participants continued to react negatively to...
Read more
- Advertisement -