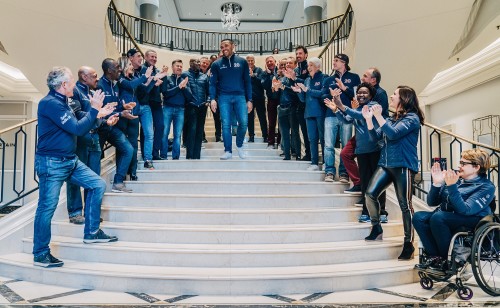 Widely
regarded as one of the greatest rugby players of all time, Bryan was inspired
to take up the sport when he saw Nelson Mandela and Francois Pienaar lifting
the Rugby World Cup in 1995. Sitting in the stands at Ellis Park, he dared to
dream and went on to become one of the most prolific try scorers the game has
ever seen.

Bryan
was the star of the 2007 Rugby World Cup, scoring eight tries to help his
country become World Champions, equalling Jonah Lomu’s single tournament record
in the process. His efforts led to him being named 2007 IRB World Player of the
Year. With 67 Test tries, Bryan is second in the all-time international try
scoring list. As well becoming a World Champion, he has won the Tri Nations, a
British and Irish Lions Series and the European Champions Cup.

In
2009, Bryan was announced as an Ambassador for Laureus Sport for Good and in
the past decade, he has been a dedicated member of the Laureus family, taking
time to visit programmes around the world, raising both awareness and funds to
support the transformational work of these programmes. Bryan joins the 68
current members of the Laureus World Sports Academy.

Laureus
Academy member Bryan Habana said: “Named after two football legends, sport has
been a part of my life for as long as I can remember. Whether being inspired by
it, playing it or using it as a medium to give back. To be able to witness
first hand both as a fan and as a player the power that sport has to bring
about change, as big as I dreamt, I never in my wildest dreams imagined how
much sport would impact my life.

“It is an incredible honour for me to
become a Laureus Academy member, alongside sporting icons that are not only legends
of the sporting world but have also brought so much joy to so many people
across the globe, is something that I am extremely humbled by. The values which
Laureus, its Academy and Ambassadors stand for, are values which I hold very
dear to my heart. In my new role as an Academy member, I hope that I can
continue making a difference, no matter how small, in children’s lives around
the world.“

Read Also:  Give Gift Boutique Predicts A Sales Boom of Preserved Flowers on Valentine's Day Due to The Growing Demand of Floral Gifts During COVID-19

Laureus
Academy Chairman Sean Fitzpatrick
said: “Bryan was a world class rugby
player and he has been an outstanding Ambassador and supporter for Laureus
Sport for Good for the past decade. He believes in what we are trying to create
in the Laureus World Sports Academy, and I’m looking forward to working with
him in the future as we focus on using sport to improve the lives of
disadvantaged young people around the word. Welcome to the team, Bryan.”

It was at
the inaugural Laureus World Sports Awards in 2000 that Laureus Patron, Nelson
Mandela, spoke the words which sparked the creation of the worldwide Sport for
Good movement. 20 years on, these words
still guide Laureus today – ‘Sport has the power to change the world; to
unite people in a way little else does’. From sports stars to sports fans
and the young people in Laureus Sport for Good programmes around the world: Sport
Unites Us.

For more information on the Nominees and to
stay updated in the build-up to the 2020 Laureus World Sports Awards, visit laureus.com/world-sports-awards and follow #Laureus20 on social platforms.