Daimler Trucks ended the financial year 2019 with a solid result in a challenging environment. With an operating profit (earnings before interest and taxes, EBIT) amounting to 2.5 billion euros, 2019 was the third most successful financial year in the history of the business division, despite a decline (minus 11% compared with 2018). Revenue equated to 40.2 billion euros and was thus above the level of the previous year (by comparison: 38.3). The return on sales for 2019 was 6.1 percent (minus 1.1 percent compared with 2018).

From the third quarter of 2019, the company felt the beginning of an economic normalization in key markets and reacted immediately. By way of example, the demand that had been high at the beginning of the year in particular in North America, Europe and Japan, in particular, was down at the end of 2019. Overall, following the record year of 2018, Daimler Trucks’ sales were down 6 percent to 488,500 (compared with 517,300) units in 2019. Daimler Trucks, therefore, adjusted its global production accordingly in the third quarter of 2019. In view of the cyclical commercial vehicle business, sales development is to be regarded as normal and common for the sector. 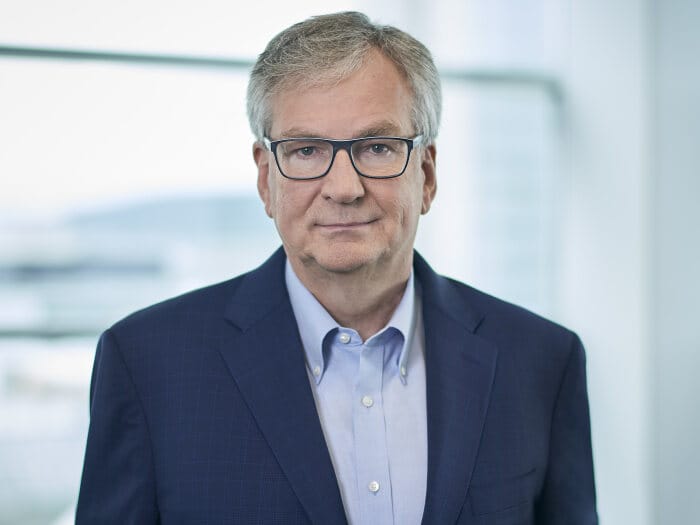 For 2020 Daimler Trucks is anticipating further normalization of the demand which has been particularly high in recent years. In the key truck sales markets, the company is expecting rather unfavourable general economic conditions. In the North America region, the company assumes that the market for heavy-duty trucks (Class 8) will significantly decrease. The basis for comparison is the very high level in 2019. In an ongoing weak overall economic environment in the EU30 region (EU, United Kingdom, Switzerland and Norway), demand for heavy-duty trucks is expected to decline significantly compared with the robust level of the previous year. In Brazil, sales of heavy-duty trucks are likely to remain at only about the same level as last year following the lively recovery of previous years. In Japan, we anticipate a significant decline in demand for heavy-duty trucks.

Martin Daum, Chairman of the Board of Daimler Truck AG: “2019 was a solid year for Daimler Trucks. We achieved a good result of 2.5 billion euros. We responded to the economic headwind in key regions and adjusted our production. We want to and will permanently cut our costs. This is why we have intensified our efficiency measures. We will continue to lead the transformation in our trade. The earnings power for extensive investments in future technologies is the key to success. This is how we can achieve a sustainable transformation to emission-free, automated and connected transportation of the future.”

Back in November 2019 on the occasion of Capital Market Day, Daimler Trucks made clear to cut both variable and fixed costs. Despite successful previous initiatives, there is still a great need for action, as the company’s profitability still cannot be assessed satisfactorily from a business perspective. Daimler Trucks has therefore initiated extensive efficiency measures throughout the company. The focus here is on the European business system. “STREAM 2” aims to reduce personnel-related costs by 300 million euros by 2022. Daimler AG is taking measures which have been negotiated with the employee representatives in an appropriate company-wide works agreement for Germany. Over and above this, by the end of 2022, variable costs are to be cut by 250 million euros. One example here is a new exhaust gas cleaning box – a particularly costly key component of modern trucks – which is significantly more powerful yet more favourably priced.

Huge investments on the road to the CO2-neutral product range

With the efficiency improvements also planned, Daimler Trucks is systematically driving forward its transformation of the business model to a locally CO2-neutral future. This is the core of the sustainable corporate strategy. In 2020 and 2021 both Daimler Trucks and Daimler Buses business divisions are jointly investing an average of around 1.7 billion euros per annum in their research and development activities. Doing this, Daimler Trucks is sending out a clear signal: the company wants to lead the transformation in the sector with comprehensive investments in new technologies in future, too. The aim is to achieve a CO2-neutral fleet on the road (“tank-to-wheel”) with electric drivetrains plus the continued automation and networking of trucks and buses.

By 2039, in the triad markets of North America, Europe and Japan, Daimler Trucks only wants to offer new vehicles which operate CO2-neutrally. By as early as 2022, the aim is for the vehicle portfolio in the main sales regions of North America, Europe and Japan to include series production vehicles with battery-electric powertrains. In the second half of the 2020s, Daimler Trucks wants to extend its series production portfolio to include electrically powered fuel cell trucks. The aim is for them to run on liquid hydrogen. The ultimate goal is CO2-neutral transportation on the roads by 2050. In addition to this, all the European plants of the Daimler Trucks & Buses business divisions are to produce their vehicles on a CO2-neutral basis and draw their energy from regenerative sources by 2022.

Read Also:  Cars with embedded connectivity to reach 200m by 2025, with 5G adoption set to soar

Innovative products for customers who keep the world moving

Daimler Trucks has strong brands with excellent products around the world and is undisputed in its position as the world’s largest manufacturer of commercial vehicles above 6 tons. At the beginning of 2019, the new Freightliner Cascadia celebrated its world premiere. It was unveiled as part of the Consumer Electronics Show (CES) in Las Vegas as a series production truck with a partially automated driving function (SAE level 2) and has been awarded accolades including the “Best Transportation Technology” Award. Later in the year, the new Cascadia was launched in Australia and New Zealand. Production of the new Mercedes-Benz Actros also began in Wörth in May 2019. Commercial vehicle trade journalists from 24 European markets voted the Actros the “International Truck of the Year 2020”. Daimler Trucks is optimistic that it will be able to improve its market position in Europe with the new Mercedes-Benz Actros.

The new Actros has also made a successful start in Brazil. In October 2019, at »Fenatran«, Latin America’s largest commercial vehicle and transportation fair, Mercedes-Benz do Brasil presented the new Actros produced in Brazil. The heavy-duty truck was further developed specifically for the Latin American market and at the same time uses technologies available all over the world, such as the MirrorCam. With the planned market launch in 2020, the new Actros will once again set standards in Brazil with regard to efficiency, safety and networking.

In the important market of India, in conjunction with the new exhaust emission standard Bharat Stage VI (BS VI), Daimler Trucks renewed the entire product range of its BharatBenz brand, which is presented in January 2020. With 13 new heavy-duty and medium-duty trucks, BharatBenz meets the new Indian emission standard BS VI on the basis of Euro 6 technology. At the same time, it is offering its customers new standards in many different respects: for instance, the new vehicles have the real-time service Truckonnect on board and offer more comfortable cabs than those from local competitors. In the Japanese market, the FUSO Super Great heavy-duty truck with partially automated driving (SAE Level 2) has also been available to customers since October 2019.

Daimler Trucks is a pioneer of electric mobility: on the one hand, with electric trucks in worldwide customer use, and on the other hand, with a holistic ecosystem including consulting and infrastructure services for electric-truck customers. Now, the E-Mobility Group of Daimler Trucks & Buses is launching a worldwide initiative named “eTruck Charging Initiative” to establish charging infrastructure for battery-electric trucks. The initial focus is on charging stations installed at the depots of truck customers. As part of the initiative, the E-Mobility Group is bringing together the main players: E-truck customers, power grid operators, energy suppliers, charging hardware manufacturers and charging software providers.

The focus of activities is currently in the United States and Europe. Japan is the next market to follow. Since 2018, the E-Mobility Group bundles Daimler Trucks & Buses’ global know-how in the field of e-mobility and defines the strategy for electric components and products across brands and segments. As is the case with the global platform strategy for conventional vehicles, the E-Mobility Group develops an integrated electric architecture, maximizing the use of synergies and optimizing the application of investments.

Daimler Trucks and Torc Robotics, leading in the development of autonomous driving software, started development and testing of trucks with SAE Level 4 intend technology on public roads in September 2019. The first routes are located on highways in southwestern Virginia, near Torc Robotics’ headquarter. More routes in other US states will follow soon. In early 2019, at the Consumer Electronics Show (CES) in Las Vegas, Daimler Trucks announced an investment of more than €500 million (approximately 570 million US dollars) in the development of highly automated trucks in the next years. In June 2019, Daimler Trucks founded the Autonomous Technology Group for this purpose. Together with the subsidiary Torc Robotics, which was acquired in spring 2019, this global organization combines worldwide know-how and experience in development of automated driving systems. The group is responsible for the overall strategy and implementation of highly automated driving at Daimler Trucks.

Daimler AG today reported its results for the fiscal year 2020 ended December 31, 2020. In a challenging environment due to the COVID-19 pandemic,...
Read more

Daimler issues first green bond with a volume of €1 billion