BERLIN, GERMANY – Media OutReach – February 18, 2020 – In a moment of sporting
history, the greatest Formula One driver of his generation Lewis Hamilton and Lionel
Messi, the world’s greatest footballer, were declared joint winners of the
prestigious Laureus World Sportsman of
the Year Award, in front of a glittering international audience in Berlin. 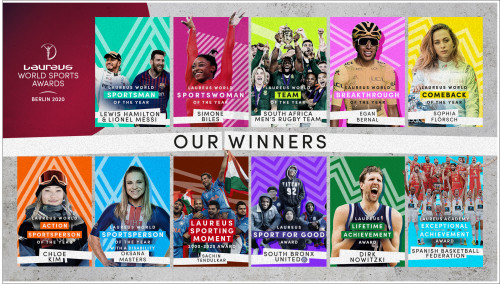 Six-time
Formula One world champion Hamilton and six-time FIFA World Player of the Year
Messi were so close in terms of their achievements in 2019 that even the ultimate
sporting jury, the Laureus World Sports Academy, could not split them, with the
voting being tied for the very first time in the 20-year history of the Laureus
Awards.

The Winners were
revealed as the greatest room in sport gathered together to be part of the most
important annual Awards Ceremony, this year celebrating the 20th anniversary of Laureus. The hugely popular
event was hosted by actor Hugh
Grant and the legends of sport past and present in the room were treated to
entertainment from British singer-songwriter Liam
Payne, former member of One Direction.

American sport is
celebrating FOUR Awards. In 2019, Simone
Biles continued to push the boundaries of the sport of gymnastics. At the
World Championships, the 22-year-old won five gold medals, including a record
fifth All-Around world title and helped USA win a fifth straight team medal. Biles
has now won 25 World Championship medals, confirming her as the most decorated
gymnast in history. In Berlin, she confirmed her place in the history of
Laureus, winning her third coveted Laureus
Sportswoman of the Year Award in four years.

In the Laureus Sportsperson of the Year with
a Disability category, Oksana
Masters, born with limb impairments caused by radiation from Chernobyl, and
adopted by an American single parent, was recognised by the Laureus World
Sports Academy for an outstanding year in 2019. She won five gold medals and a
silver at the World Para Nordic Skiing Championships, plus the cross-country
overall World Cup title. She also won silver medals in the road race and
time trial H5 at the Para Cycling Road World Championships.

South Bronx United (SBU), a football programme based in New York,
was honoured with the Laureus Sport for
Good Award. The programme uses football to achieve educational outcomes for
young people from underserved communities.

The 2019 Rugby World
Cup winners South Africa won their
second Laureus World Team of the Year
Award, beating Jürgen Klopp’s Liverpool and the US Women’s Football Team,
among others. The memory of Siya Kolisi, South Africa’s historic first black
Test rugby captain, lifting the Webb Ellis Trophy in Yokohama, was an iconic
moment in sport and the audience in the Verti Halle in Berlin applauded the
emotional moment when Kolisi led six of the team members on stage to receive
the Laureus Statuette. The team’s victory united communities back in South
Africa, and was proof of sport’s ability to change the world.

For the 2020 Laureus World Comeback of the Year, the
number 276 will be a constant reminder of the resilience, courage and
dedication it takes to return from the toughest setbacks. Travelling at 276km
per hour, F3 driver Germany’s Sophia Flörsch
lost control of her car at the Macau circuit, crashing through safety barriers and leaving her with a spinal
fracture which required an 11-hour surgery and months of rehabilitation. In
November 2019, a year on from her accident, 18-year-old Sophia was back in the
cockpit, racing once again in the Macau Grand Prix.

Read Also:  Amazon Singapore Ushers in the Year of the Ox with Bountiful Deals on Amazon.sg and Amazon Fresh

At 22, Laureus World Breakthrough of the Year Egan Bernal became the youngest rider
to win the Tour de France for 110 years, wearing the yellow jersey down the Champs-Élysées in what was only his second three-week classic event. A
proud Colombian, Bernal’s win united his nation back home as he became the
first Colombian to win the world famous cycling event.

With the incredible backing
of Indian cricket fans, who united in support of their hero, the Laureus Sporting Moment Award (2000-2020)
public fan vote was won by Sachin
Tendulkar. Voted for by sports fans around the world, the Award celebrated
moments from the past two decades where
sport has unified people in the most extraordinary way. On his sixth attempt, Tendulkar
led India to victory at the 2011 ICC World Cup. The
victory could not have been more historic, as it was India’s first World Cup
win on home soil and their second ever triumph.

German basketball great
Dirk Nowitzki was recognised at the
Ceremony with the Laureus Lifetime
Achievement Award for his contribution to the sport of basketball. Widely
regarded to be the greatest European basketball player ever, Nowitzki spent his entire 21-year career at the Dallas Mavericks. Nowitzki retired at the end of the 2018-19 season, and will go down in history as
the only player to record at least 31,000 points,
10,000 rebounds, 3,000 assists, 1,000 steals, 1,000 blocks and 1,000
three-pointers.

The Laureus World Sports Academy recognised the Spanish Basketball Federation with the Laureus Academy
Exceptional Achievement Award, an
Award which
has only ever been granted four times. Spanish
basketball is enjoying unmatched success, with the Men’s team winning the 2019 FIBA World Cup in China, and being hotly tipped to succeed at the
Tokyo 2020 Olympic Games later this year. The Spanish Women’s Basketball Team
have established themselves as the dominant force in European basketball having
won three of the last four EuroBasket championships.

It was at
the inaugural Laureus World Sports Awards in 2000 that Laureus Patron, Nelson
Mandela, spoke the words which sparked the creation of the worldwide Sport for
Good movement. 20 years on, these words
still guide Laureus today – ‘Sport has the power to change the world; to
unite people in a way little else does’. From sports stars to sports fans
and the young people in Laureus Sport for Good programmes around the world: Sport
Unites Us.

Laureus World Sportsperson of the Year with a Disability: Oksana Masters

Laureus Best Sporting
Moment:
‘Carried on the shoulders of a nation’ — Sachin Tendulkar

For highlights, reaction and more information on the 20th
anniversary Laureus World Sports Awards, visit laureus.com/world-sports-awards and follow #Laureus20 on social platforms. Celebrated at the Awards Ceremony, Laureus’ Sport Unites Us theme will
continue throughout its 20th anniversary year in 2020.