Cadbury Nigeria Plc’s (‘Cadbury’ or ‘The Company’) restructuring efforts continue to yield results, as evidenced in its recently released unaudited FY’19 financial statement. In Q4’19, the Company rebounded with a  solid performance. Although signs of pressures were evident when compared to the corresponding period of the previous year, a strong H1’19 result was able to cover for the weaknesses in H2’19.

Revenue grew by 16% year-on-year in Q4’19 to N10.41bn from N9.01bn in Q4’18. We believe that the revenue growth was a  manifestation of improved salesforce productivity and efficient route to market.  We also think that there were price increases during the period. Revenue grew by 13% in Q1’19 and by 9% in Q2’19. Weak revenue growth in Q3’19 raised questions on the sustainability of the double-digit growth,  and we had expected weaker revenue growth in Q4’19. However, revenue performance surprised in Q4’19. 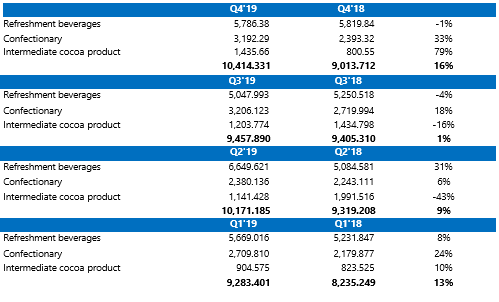 The cost margin stood at 77% in Q4’19, relative to 82% in Q3’19. In our view, we think that owing to increased competition in the market,  Cadbury was unable to pass the increased cost of production to consumers in  Q3’19. However, resulting from the squeeze in margins  (the Company made a loss of N21.91mn in Q3’19 from a profit of N595.72mn in Q3’18), we posit that the Company saw the need to raise prices, albeit below the rate of increase in costs. We also think that the favorable economic policy  (land border closure)  possibly made it relatively easy to raise prices in Q4’19.

On a full-year basis, revenue grew by 9% year-on-year to N39.33bn in FY’19 from N35.97bn in FY’18. The 9% revenue growth was led by a 20% revenue growth in the confectionery segment where revenue grew to  N11.49bn  from  N9.54bn  in  FY’18.  In our view,  we think that the solid growth recorded in the confectionary business was owing to a  combination of improved branding and a possible price increase during the period.  The segment which contributes the highest to revenue, the refreshment beverages segment, grew by 8% year-on-year from N21.39bn in FY’18 to N23.15bn in FY’19. Revenue from the refreshment beverages initially grew by  19%  in  H1’19.  However,  in  H2’19,  revenue from the business segment declined by 2%. We attribute the decline to the possible impact of the border closure in August 2019.

The cost of sales also grew by 11% year-on-year from N28.02bn in FY’18 to N31.11bn in FY’19. The increase in the cost of sales relative to revenue was majorly due to higher cocoa prices in the global market. Although the Company processes the cocoa that it uses for production, we believe that it still imports cocoa beans.  Until later in the period, based on the figures analyzed on the financial statements, we believe that the Company did not pass the increased costs to consumers. Thus, the cost margin rose to 79% in FY’19 from 78% in FY’18.

Resulting from an 11% increase in operating expenses, operating profit declined by 20% year-on-year from N1.69bn in FY’18 to N1.36bn in FY’19. However, the gamechanger to the bottom-line was the 100% decline in finance cost to zero from  N592.23mn  incurred in FY’18. Profit before tax grew by  26%  year-on-year to  N1.54bn  from  N1.22bn in FY’18. The combination of savings from finance cost and a  higher finance income provided accretion to the bottom-line. Profit after tax grew by 59%  year-on-year from  N823.09mn  in FY’18  to  N1.27bn in FY’19.   The result released was an unaudited result,  based on the new  SEC  rules.  Hence,  no dividend information was given. However, we think that the Company will pay at least N0.25 dividends by the time it declares its audited results.

We see the story of Cadbury Nigeria Plc as a positive one over the last five years. However, we yet believe that the returns on investment are not commensurate with the cost of capital. Between FY’14 to FY’19, revenue grew by a CAGR of 5%, while the cost margin also increased over the period.  The notable cost margin increase was seen in  FY’16  when the exchange rate was devalued.  The economy is seen not to have recovered yet,  as consumer’s purchasing power remains weak due to high inflation. The lower purchasing power, coupled with the spike in the unemployment rate and lower-income for households,  resulted in a scramble for market share among the consumer goods players.   Apparently, operating in a high-cost business environment along with dealing with price-sensitive consumers has resulted in many consumer goods companies hemorrhaging margins.

In light of the obvious challenges,  Cadbury  Nigeria  Plc saw the need to improve and restructure. In our opinion, we think that an internal restructuring was done, with efficiency at the core of operations. From our analysis, we realized that while cost margins kept rising, the administrative expenses,  selling and distribution expenses declined over the last 5 years. Following the loss after tax of N296.04mn reported in FY’16, on the back of restructuring and efficiency, the Company recorded steady growth to N1.27bn in FY’19, the highest since FY’14.

The improvement in operating performance is also evidenced in the strong operating cash flows of  N4.06bn in FY’19, relative to  N2.96bn cash generated in  FY’18. The improvements in the figures over the years underpins our postulation that the restructuring and internal improvements of the firm yielded results.

In our view, we believe that to be able to deliver value to shareholders in the form of higher returns on investment, the Company might need to expand its product portfolio and probably expand aggressively. The expansion could either be in the form of an acquisition or other forms of strategic investment decisions.  While we note the efforts on efficiency and internal improvements, we believe that more efforts are required to drive value for the Company.

The current valuation of the company is N18.22bn (N9.70 per share). We believe that based on the potentials and prospects of the Company and consumer goods industry, the fair value of the Company is N8.66bn (N4.61 per share). Our forecast EPS is N0.72 (FY’19: N0.67). We expect the  Company to consolidate its efficiency drive in  FY’20.  At the current market price of N9.70, earnings yield is 7.43% while the dividend yield stands at 2.58% (we forecast a dividend of N0.25). Also, the return on equity estimate of 9.72% is below our estimated cost of equity. Hence, we recommend a SELL for the stock, as the stock currently trades at a 52% premium to our fair value estimate.

Cadbury Nigeria, a part of Mondelēz International, and producers of the iconic Bournvita, a cocoa beverage drink, has rewarded the top three winning schools...
Read more

Cadbury Nigeria Plc wishes to notify The Nigerian Stock Exchange (NSE) of the appointment of two (2) additional Non-Executive Directors to the Board of...
Read more