While we recognize that Q2 is usually their strongest quarter, given the festivities in the period, we specifically note management’s continued drive to strategically shift volume focus to the Spirit segment of the business which is a high margin segment and now contributes over 19% to revenue (+1% y/y) as at H1’20. Despite this, Gross margin declined 1% y/y, dragged by lower margins in Q1’20. In addition to this, the company
reported that they had increased prices across Lager, Beer and Mainstream Spirits.

These increments are following another round of excise duty increases in the Beer and spirit segments (Beer: ₦0.30/cl to ₦0.35/cl, Spirits ₦1.50/cl to ₦1.75/cl). We recall that management had back-pedalled on price increases – when excise duties were first increased – to maintain competitive pricing and market share. However, even with the price
increases across board, the company reported 56% y/y volume growth in the Mainstream Spirits segment for H1’20.

There was also a marked improvement in operating efficiency in the quarter as the company’s OPEX margin declined 5ppts q/q and 0.3ppts y/y, however, this was dragged by the poor performance in Q1’20 as Opex margin in H1’20 rose 0.17ppts y/y. Meanwhile, GUINNESS had been able to halve its finance costs in this quarter (from ₦1.2 billion in Q1’20 to ₦0.6 billion in Q2’20), paying down most of its short-term debt holdings, such as its bank overdrafts and its letters of credit, presumably to take advantage
of the current interest rate realities in the fixed income environment. Overall, PAT declined 49% y/y from H1’19, majorly due to the loss recorded in the first quarter.

Spirits to remain the support system

Although we have seen quite an impressive Q2’20 performance, we slightly adjust our FY’20 PAT forecasts downward to ₦4.7 billion. Whilst we have increased our revenue forecast based on the expected price increases across the spirit and beer segments – adjusted for a balancing effect on volumes – we make slight revisions to forecasted Cost of sales, given the H1’20 run rate and expect Cost of sales to decline only 1% y/y (previous: 6% y/y). That said, Spirits remain the favoured child as we still expect its contribution to Revenue to hover above 19% for the period amidst still strong competition in the beer segment. Meanwhile, given our outlook for increased inflation in the first half of the year, we made slight adjustments to our expectation for FY’20 operating expenses to ₦30.62 billion (-3.1% y/y, previous: -7% y/y). Despite this, we expect operating profit to grow slightly by 2% y/y to ₦8.3 billion. Furthermore, we expect the continuous re-financing of current debt holdings to translate to significantly reduced finance costs for the remainder of the year, although the line item is expected to grow 13% y/y to ₦2.9 billion in FY’20 (given the run rate from Q1). We, therefore, foresee a slightly depressed PBT of ₦6.9 billion for the year (FY’19: 7.1 billion) and project an FY’20 PAT of ₦4.7 billion (FY’19: ₦5.5 billion). All in, we revise our target price downwards to ₦43.53 per share but maintain our BUY recommendation. 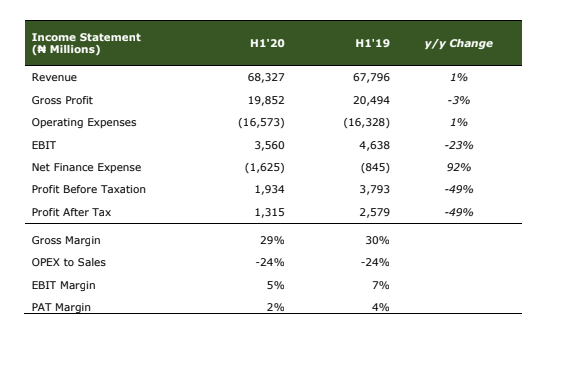 Guinness introduces ‘Guinness 0.0’, the Guinness with everything except alcohol

Guinness Nigeria has officially unveiled new members of its Smooth tribe who individually and collectively embody the distinctive qualities and characteristics of Guinness Smooth. In a smooth and...
Read more

Diageo, the maker of GUINNESS, has today announced a new global programme to support pubs and bars to welcome customers back and recover following...
Read more
- Advertisement -