According to the World Bank, Nigeria is the largest consumer of palm oil in Africa, driven by its huge population. In 2018, Nigeria was reported to have consumed c. 3.0mn metric tons (MT) of fats and oils, with palm oil accounting for 44.7% (1.3mn MT). 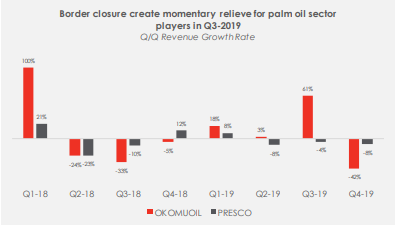 In the same period, production stood at 1.02mn MT, resulting in a supply shortfall of 0.32mn M T. Notably, the supply gap pointed to opportunities for local production to expand. Thus, in a bid to spur new investments, the Federal Government through the CBN included palm oil as part of items prohibited from accessing foreign exchange from the official market and disbursed about N30.0bn to oil palm farmers.

The above notwithstanding, the performance of the two listed sector players (OKOMUOIL and PRESCO) was underwhelming in H1-19, as the activities of smugglers, as well as more competitive substitutes, hurt revenue significantly. The financial performance improved in Q3-19, as the closure of land borders propped up demand for locally produced crude palm oil. However, their performance in Q4-19 failed to track Q3-19’s numbers, as both players recorded declining revenue. In total, FY-2019 revenue and profits fell year on year.

Over 2020, we see a potential for upside in sales volume, especially from the domestic segment, on the back of our expectation for controls around the land borders to remain strict in 2020 and high global crude palm oil prices. However, we believe H2-20 might be a bit competitive, depending on the outcome of the kick-off of the Africa Free Trade Continental Agreement (AfCFTA) which should grant access to other players within the continent to Nigeria’s local market.