NAMIBIA’S first consignment of beef to the United States of America has left, after 18 years of extensive negotiations between the two countries.

Deputy prime minister Netumbo Nandi-Ndaitwah said the export of Namibian beef, through the Meat Corporation of Namibia (Meatco) to the United States is a great achievement in the advancement of Namibia’s economic diplomacy. 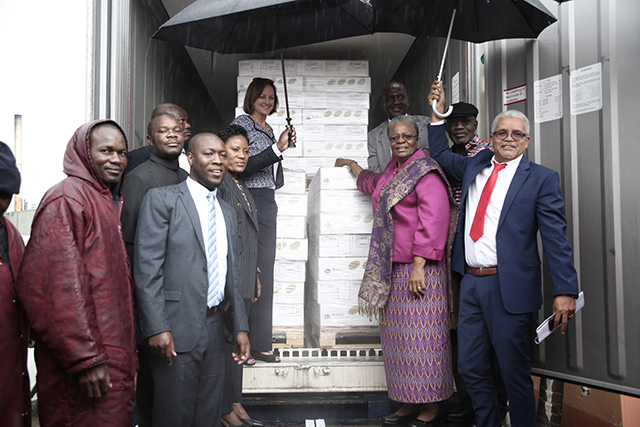 Speaking at the sending off of the consignment yesterday, Nandi-Ndaitwah added that the occasion signifies how ties between Namibia and the US continue to be strengthened through different bilateral agreements, and through the African Opportunity Growth Act (Agoa), the two economies can now see some of those coming to fruition.

“In 2002 and again in 2005, the government of Namibia initiated negotiations on the export of meat (beef) products to the United States, with the intention to exporting boneless (not ground) raw beef products such as primal cuts, chuck, blade, and beef trimming. Today, 18-years later, we are able to finally export meat to the lucrative and big US market.

“I think this may be one of the longest protocols ever that the Food Safety and Inspection Service (FSIS) of the USA and the Namibian Directorate of Veterinary Service (DVS) had taken to ensure that all technical areas are cleared and are in accordance with various established protocols. It is said, ‘nothing good comes easy’, today Namibia is proud of this achievement,” the deputy prime minister said.

When negotiations started, no other African country had ever exported beef to the US despite the fact that it is the world’s biggest beef consuming market, Nandi-Ndaitwah said.

Read:  HOW CAN I PREVENT MY CHILD FROM COVID-19?

“It was, therefore, an ambitious undertaking for Namibia, a country with 2,4 million cattle and competing for a share in a market claimed and defended by the developed beef producing countries of the world,” she said.

Namibia underwent several audits in September 2019, including a public health and assurance audit by the US via Food Safety and Inspection Services (FSIS). On an annual basis, DVS submitted an online self-audit, which FSIS verified with an on-site audit every two years.

The audit ensured that Namibia complies with all the import requirements of the US beef market and, based on the final audit report, Namibia was granted excess to continue exports to the US.

“As a food business operator, Meatco was audited at plant level by the FSIS auditor. The auditor conducted a walk through the plant, whereby a thorough assessment of how the plant is prepared by the DVS health inspectors for the start-up was carried out,” she said.

Meatco will be exporting boneless raw beef products like primal cuts and beef trimmings as well as chuck and blade. Namibia can also export both chilled and frozen boneless meat (excluding offal, ‘matangaras’) to the US, the deputy prime minister noted.

Speaking at the same occasion, US ambassador to Namibia Lisa Johnson noted that Meatco’s high-quality beef product has enabled Namibia to become the first country in Africa to be eligible to export beef to the United States.

“One of my top priorities as US ambassador is to increase US-Namibia trade and investment in order to create prosperity for both our countries. And since my arrival in Namibia two years ago, I have had the honor to work closely with Meatco and the ministries represented here today to help make the export of Namibian beef to the United States a reality,” she said.

Read:  Pepsi Unveils ‘We Got Taste” Campaign, Agenda for December

Corroborating the deputy prime minister’s sentiments, the ambassador stated that Meatco has submitted itself to rigorous tests of its beef products and processes in order to gain access to the US market and is regularly audited.

“As a testament to Meatco’s excellence as a quality beef producer, I am proud to reconfirm that Meatco continues to meet all standards set forth by the US Department of Agriculture and US Food Safety and Inspection Service for beef production and processing. Meatco will benefit from duty-free export of beef into the United States through Agoa,” Johnson added.

Moreover, agriculture minister Alpheus !Naruseb added that the trade between Namibia and the US cements the US’s objectives to increase trade with Africa, improve economic relations and enhance market access under Agoa.

“The significance of exporting Namibian beef is more than just adding yet another high-quality ingredient to the American people’s plate; it marks the success of two countries in the realization of win-win cooperation. Namibia as a developing country continuously and rigorously striving to expand its international markets for meat and meat products while creating more job opportunities for its people,” he said.

The Nigerian Air Force (NAF) has postponed the entrance examination into its Military secondary schools for males and females in Jos owing to the...
Read more
Health