Real Madrid and Barcelona supporters in Nigeria, Mexico and Colombia can view Sunday’s hugely awaited LaLiga ElClásico in the presence of legends and LaLiga Ambassadors at specially organised viewing parties in each country.

The two teams come into the clash at the Santiago Bernabeu in Madrid battling at the top of LaLiga Santander’s standings, with Lionel Messi, Antoine Griezmann, Sergio Ramos, Karim Benzema and company nearing top form as the season’s biggest games arrive.

The action from the Bernabeu is being broadcast to a potential audience of more than half a billion TV viewers in 182 countries worldwide, while fortunate fans in Lagoscan watch the game in the company of formerElClásico stars who is now LaLiga Ambassadors: Samuel Eto’o. 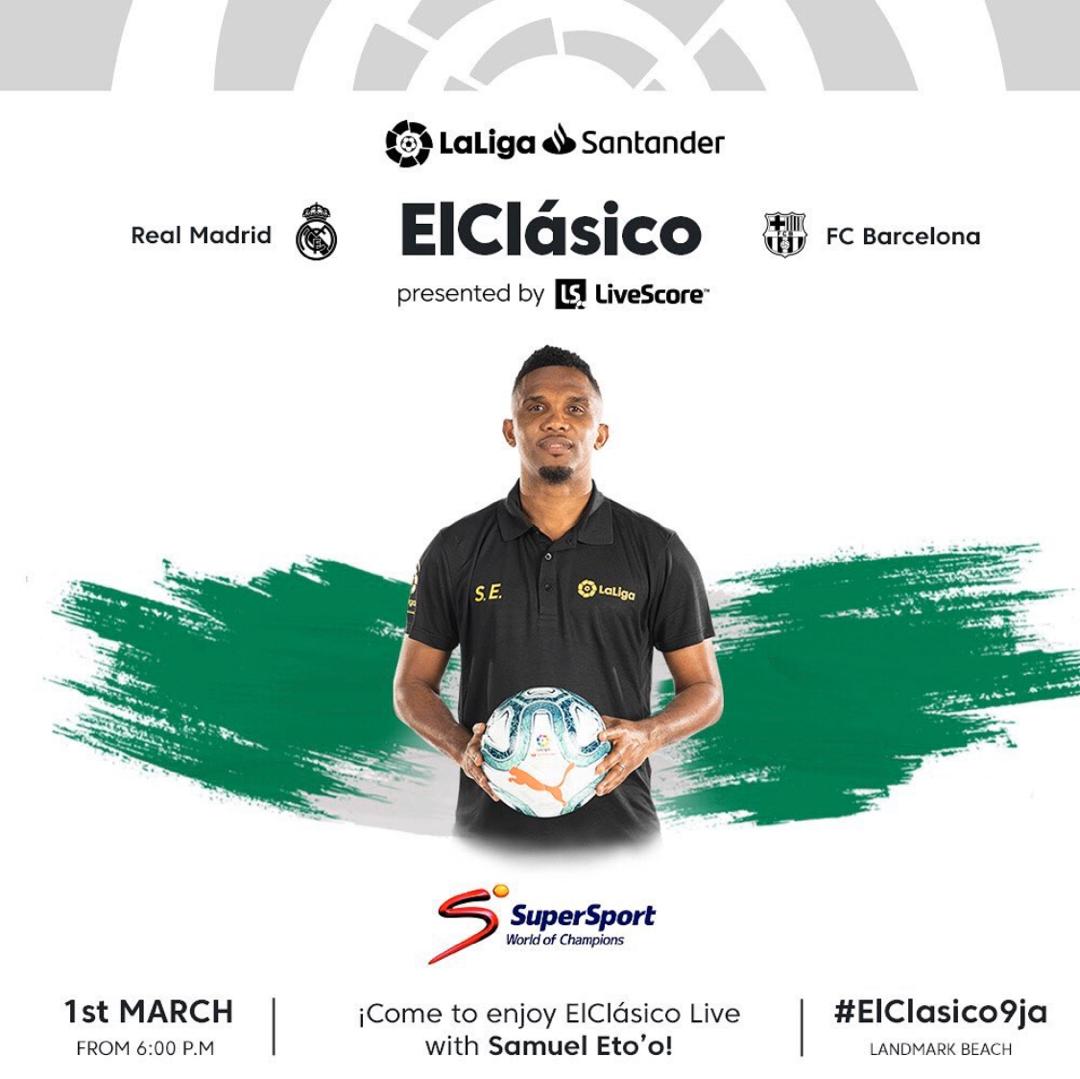 Up to 1,500, LaLiga fans are expected to attend the Lagos viewing party at the Landmark Beach resort right at the seafront on Victoria Island. Three-time LaLiga winner Samuel Eto’o, a former teammate of Messi at the Camp Nou who ironically began his career with Real Madrid, and Former Nigeria international and LaLiga Ambassador, MutiuAdepoju who also began his LaLiga career at Real Madrid will be on hand to share their views on the game. Fans will be given the opportunity to receive autographs from both legends!

Speaking on the event, Guillermo Pérez Castello, Delegate of LaLiga in Nigeria said “This match viewing event of ElClásico is part of LaLiga’s internationalization strategy to be closer to its fans. From the Nigerian Office of LaLiga, we want to continue developing actions and activations to help our league and its clubs to grow in this market”.

“We encourage fans to register and attend this viewing event as it promises to be a fun-filled event as they get to meet and greet LaLiga Ambassadors Samuel Eto’o and MutiuAdepoju. A fan zone has also been created where attendees can enjoy different interactive activities, food and drinks during the event. Some of the activities include Football snooker, Foosball, a ball header challenge, official jersey displays of the Spanish competition where fans can take photos with their best team’s jersey and many more” Pérez added

Also speaking on the event, Chief Customer Officer, MultiChoice Nigeria, Martin Mabutho said: “The LaLiga ElClásico Viewing Party is one of the ways we are enriching the football experience of our customers. Not only do they get to watch the action LIVE and in HD on our SuperSport channels, but now they will also get to enjoy the match whilst interacting with one of LaLiga’s greatest footballers!”

Popular DJ Crowd Kontroller will keep the party going both before and after the action from the Bernabeu, while fans present can enjoy games and activities before and after viewing the game on the big screen and share their experience on social media using the hashtag #ElClásico9ja. The free entry event which is open to the public is organised along with LaLiga’s Nigerian broadcast partner Supersport and LiveScore.

Even before the pandemic, the oil and gas industry was faced with slumping prices. However, with a record collapse...
Read more
Brand News

COVID-19: The Virus, MultiChoice and Everything In Between

LUCAS BOLUWAJI There is little or no chance that we can find a service subscriber, who does not have one issue or the other with...
Read more

MultiChoice, Africa’s most-loved storyteller is proud to announce a brand-new Pan-African lifestyle channel on our DStv platforms, HONEY, on DStv channel 173. As part of...
Read more

In 2011, MultiChoice gave an open invitation to Nigerians to get on the digital train and access superior audio-visual quality and top-tier entertainment at...
Read more

LaLiga has entered this year’s BrandZ™ Top 30 Most Valuable Spanish Brands ranking as the highest newcomer at no.12 with a brand value of...
Read more
- Advertisement -