Dangote Cement PLC published its full-year (FY) audited 2019 earnings report with topline plunging marginally by 1.06% (y/y) to N891.671 billion from N901.213 billion in FY 2018. Despite constant production output, revenue slowed as a result of the slower sales and price cut following the heightened competition in the cement industry.

We noted the cost of sales dropped marginally by 0.87%, due to cost savings on production materials, reduction in fuel and power consumption, and fewer plant maintenances. Despite the lower cost of production, we saw gross margin thin out by 1.20% to settle at N511.682 billion from N517.902 billion.

Also, we observed a marginal increase in administrative expense, owing to the spike in salaries and related staff cost by 13.5% as well as rent, rates and insurance by 23.16%, likewise, the rise in advertisement and promotion expense (115.46%) as the company seeks to drive and improve product visibility in a bid to recover lost market share. Meanwhile, the increase in haulage expenses (21.74%) resulted from the persistent gridlock and dilapidation of road networks and round distribution networks. Consequently, operating profit declined by 11.45%, while the drop in finance income (11.46%), and increase in finance cost (15.86%) resulted in a 16.73% decrease in profit before tax (PBT) to N250.48 billion vs N300.81 billion in the corresponding period of 2018. 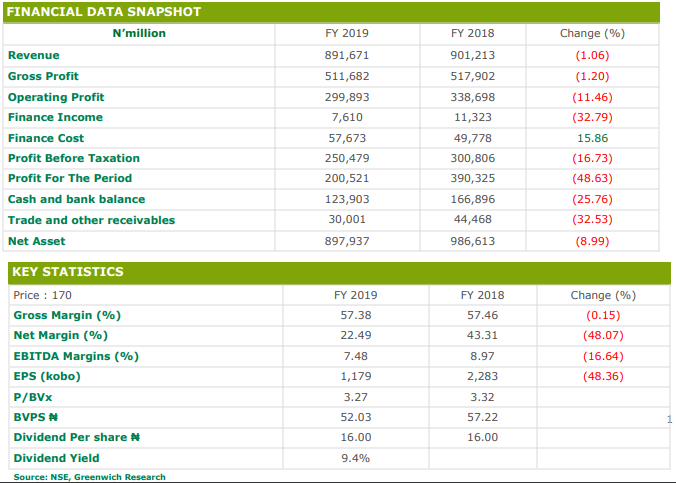