The Declining Fortunes of the Young

Will I do as well as my parents?

A positive answer to this question once seemed a foregone conclusion; now, for recent generations, less so. Despite being more educated than their parents, millennials—those born between 1980 and 2000—may have less job stability during their working life. Concerns that it might be more difficult to break into the middle class, or to have enough retirement savings, are also rising to the fore in policy debates in many advanced economies.

These concerns stem from the fact that the nature of work and the economic returns to different skills and education-levels are changing rapidly. The number of well-paid middle-skill jobs in manufacturing and clerical occupations has decreased substantially since the mid-1980s in the United States and Europe. Job opportunities today are more concentrated in relatively high-skill, high-wage jobs and low-skill, low-wage jobs.

Despite being more educated than their parents, millennials may have less job stability during their working life.

This “hollowing out” of the middle classes has been linked to the disappearance of routine occupations—jobs with a higher share of tasks performable through a set of easily codified rules (such as bookkeeping, clerical work, and some manufacturing jobs)— driven by technological progress and global integration.

Automation and artificial intelligence continue to replace workers and may also limit job creation in growing sectors. By extension, younger workers’ wages may stagnate, or they may be forced to move to low-skill and low-pay occupations.

At the same time, earnings and income gaps between generations have widened significantly in many countries. Many of these trends were exacerbated by the global financial crisis. In Europe, for instance, incomes declined for young people after the 2007 crisis due to unemployment. They have since recovered but have not grown. The rise of the so-called “gig” economy, and increases in temporary contracts, exacerbated the problem and further decreased job stability, particularly for the young.

New IMF staff research has zoomed-in on how these trends vary by gender and the level of education using labor force data from the United Kingdom over the period 2001–2018.

In the United Kingdom, workers without a college (university) degree have experienced the most drastic decline in routine jobs. Non-college-educated workers are 5 to 15 percentage points less likely to be employed in routine jobs now than they were two decades ago. This trend has had a big impact on younger generations, as middle-wage, middle-skill job opportunities they would take up continue to evaporate. 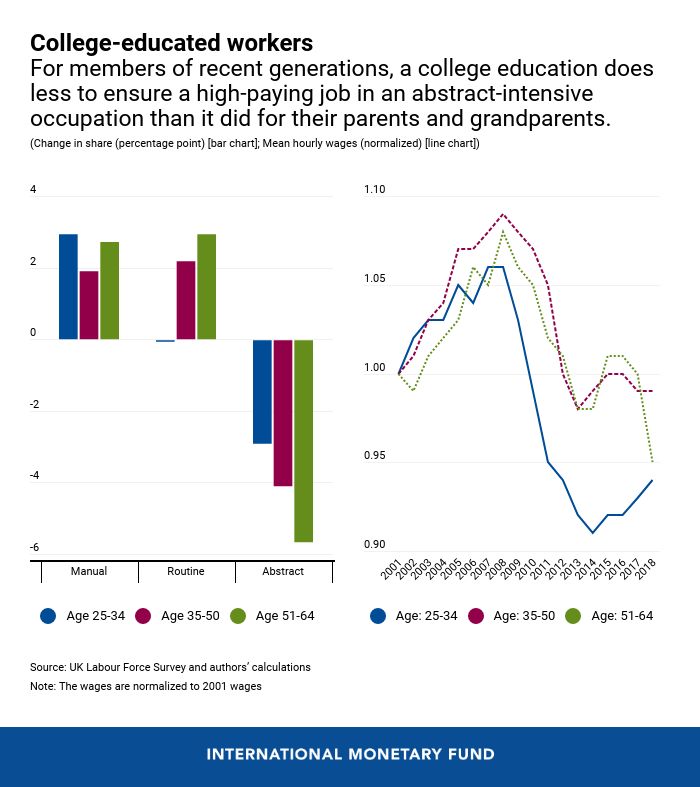 But labor market opportunities for non-college educated young women appear most affected. They are increasingly likely to be employed in low-skill manual-based jobs, and their real wages overall occupations have fallen in the past two decades. Millennial women’s wages today are more than 10 percent lower than those of women in the baby boomer generation, almost double the gap that exists for their male counterparts. 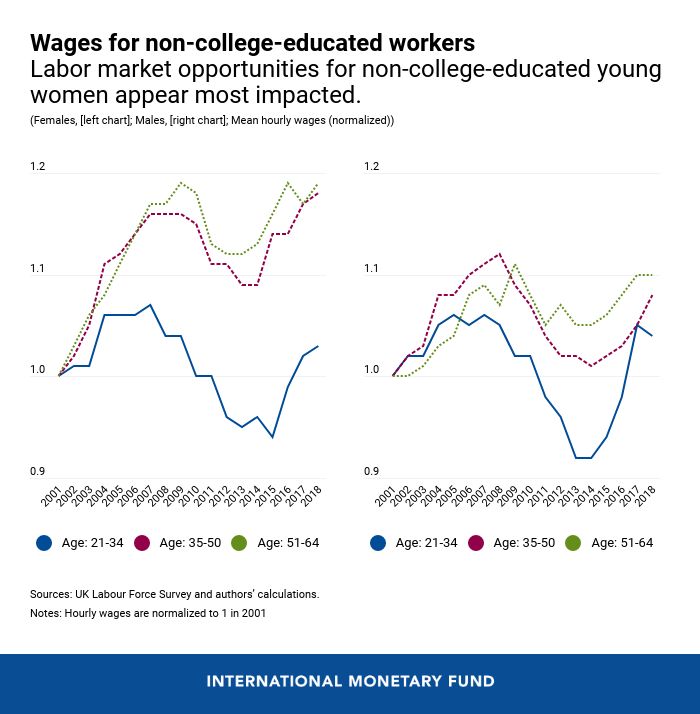 College (university) educated workers in the United Kingdom face different challenges. The share of college-educated workers increased from 29 percent in 2001 to 45 percent in 2018. As the attainment of higher education rises for younger generations, the returns to a university degree are falling. IMF staff research finds that, although an undergraduate degree still leads to a much higher likelihood of having a “good job,” it presents less of a guarantee than it did in the past in the United Kingdom. Other research suggests this is the case for the United States as well. The two criteria of a “good job” are wages and the extent of abstract-thinking in a job’s tasks, which can be complementary to technology. An abstract job is one that typically requires creative, problem-solving, and coordination tasks performed by professionals and managers.

Read Also:  How many PR tasks will artificial intelligence take over?

The share of abstract jobs among the highly-educated has fallen between 2001 and 2018. In recent years, both highly-educated male and female workers have become more likely to take middle-skill jobs compared to less-educated workers. Therefore, for members of recent generations, a college education does less to ensure a high-paying job in an abstract job than it did for their parents. The widening gap between the wages of the young and those of older people since the Global Financial Crisis, although narrowing more recently, is also of concern. 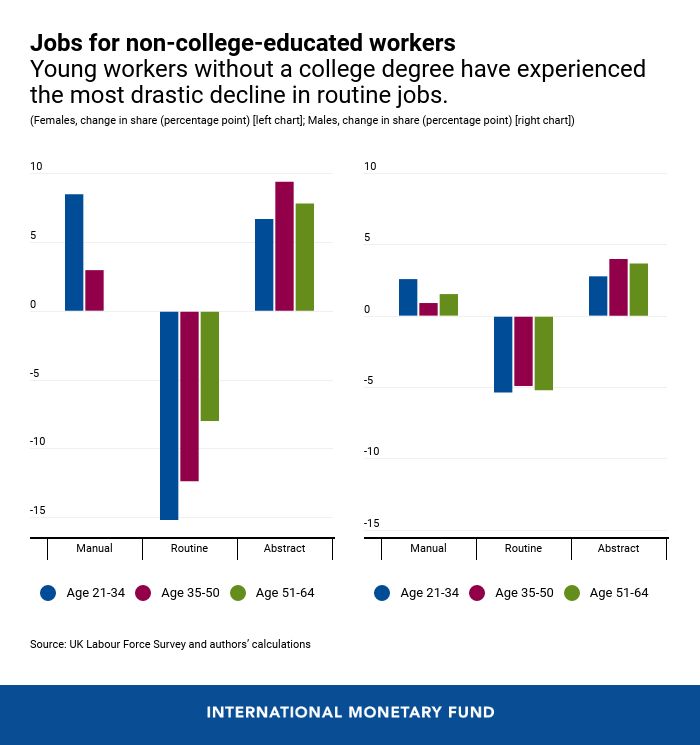 Policy responses to automation should focus on building skills to complement automation and reducing the impact of job displacement to workers both in the short and long run.

In the short term, policies should create new opportunities for people displaced by automation, particularly for low-skilled workers. Additionally, supporting research and development fields can help employ college-educated workers in areas such as science and technology. Removing legal barriers to employment and allowing for more flexible contracts may also help more young people get jobs.

Over the long term, education and skills training programs need to prepare participants to meet the adjusted demands of the labor market. College graduates should be literate in, and easily capable of using, technology for their chosen sector.

Strategy Analytics: 71% Of Smartphones Sold Globally In 2021 Will Be AI Powered

How many PR tasks will artificial intelligence take over?

Let’s think about what PR pros do in a typical day. We read, analyze and answer email. We answer calls and make calls. We schedule...
Read more