The National Bureau of Statistics published the Q4’19 and FY’19 GDP report earlier today. According to the report, GDP growth in Q4’19 surprised positively, as it grew by 2.55% (consensus estimate: 2.40%). The 2.55% GDP growth stood as the highest growth recorded since Q3’15.

Despite a contraction of 1.46% in Q1’19, Oil GDP grew by 4.59% in FY’19 from 0.97% in FY’18. We attribute the growth to increased production capacity during the period. In FY’19, the average daily production of crude oil stood at 2.00mn barrels per day from a daily average of 1.92mn barrels per day in FY’18. In our view, we think that the increase in the daily production of crude oil is related to the Total floating, production, storage and offloading unit used to develop the Egina field, thus resulting in higher production during in FY’19. 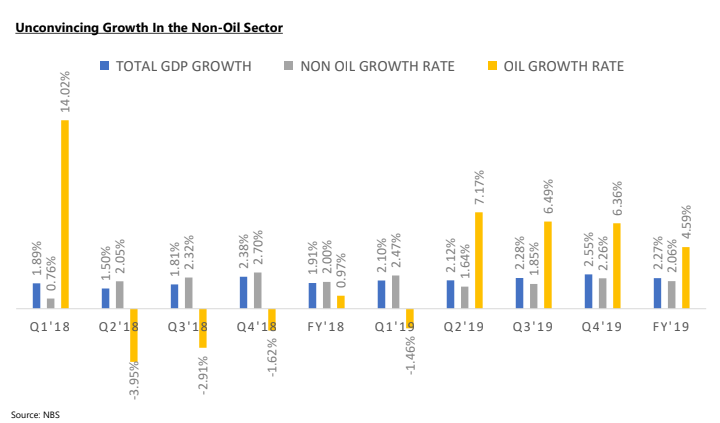 Our Opinion
The actual GDP performance beat our estimate slightly, Our FY’19 GDP forecast of 2.24% was 3 basis points lower than the 2.27% actual GDP growth reported. Although the Nigerian GDP grew by its highest figure since Q3’15, we yet note that the economic growth is below the estimated population growth of c.2.60%. The implication of a GDP growth below the population growth rate is a lower GDP per capita and a lower standard of living.