Global web infrastructure giant Amazon Web Services (AWS) has partnered with Safaricom to sell its cloud services to its East Africa customer network. This represents AWS’s first entry into the growing consumer populations of Africa – it will face competition from Microsoft Azure’s partnership with Liquid Telecom, which spans much of Southern and East Africa and has been operational since 2017.

Safaricom will become the first “advanced consulting partner” for the AWS partner network in East Africa. The telco has been offering cloud services since 2011, with 10% market share of the industry at end-19. Cloud services are a pillar of Safaricom’s enterprise business strategy, with the company aiming to:

According to Synergy Research Group, global cloud infrastructure service revenues amounted to US$27bn in Q4 19, bringing the total for the year to US$96bn. Amazon’s global market share is 33%, but this is its East Africa debut.

AWS is also expected to launch in South Africa in H1. These initiatives will put Amazon into direct competition with Microsoft Azure’s partnership with Liquid Telecom in its bid to offer Africa-wide cloud services. As the populations and businesses of Africa grow, it creates more opportunities for local operators, but also the international tech giants that can partner with them. 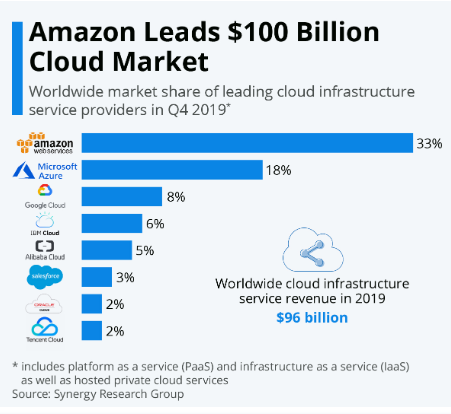 Diageo: Today we are celebrating the conclusion of our highly ambitious 2020 Sustainability and Responsibility Goals. We’re proud that...
Read more
News

The Next Robotics Legend is an initiative designed by Edu360, Union Bank’s education platform, in collaboration with Awarri, a pan-African technology company, to infuse Robotics and...
Read more
Business & Economy

The FGN bond market kicked off a new week on a very drab note but picking slightly towards the end of the session. Much...
Read more
- Advertisement -

The world is suffering from both the primary and secondary impact of COVID-19 pandemic. Africa was the last frontier to be hammered by COVID-19...
Read more

Marking a seminal moment in the history of the organization, the Global Business School Network (GBSN) is excited to welcome Togo-based Ecobank Academy as...
Read more
- Advertisement -