To talk about the spirited growth Africa’s creative industry has made and continues to make over the past few years would be to acknowledge the various ways the industry has structurally failed to live up to its capabilities. This, of course, hasn’t been the fault of the artists, filmmakers, writers, musicians and other creatives actively striving for excellence in their various fields, rather, a direct consequence of these people having to work in a scarcely supported industry.

This is where Access Bank comes in. As with the few indigenous corporations who have identified the funding gaps and potential in Africa’s creative industry, Access bank has sunk its’ feet into the entertainment industry in a bid to enable, empower and spotlight the best of Africa’s talents across the film, art, music and fashion sectors.

BAFEST is an annual event Access Bank powers as one of the means through which the African story can be told via music, fashion, art, and film. True to its intentions, the event has become a celebration of the unparalleled dynamism of the African spirit, with a design to help facilitate a global connection to the continent.

According to Herbert Wigwe, Group Managing Director/CEO, Access Bank, “We decided to beam the spotlight on the positive things coming out of Africa and that is why we created BAFEST, to not only bring Africans together to be entertained by Africans but also provide a platform for the world to experience the best of the African creative industry”.

The first edition in 2018 recorded over 14,000 attendees, but the following year, over 35,000 people showed up to sample some of Africa’s biggest acts. Big-name artists at the top of their craft, Olamide, Flavour, and D’banj and many others have entertained guests at this event. At the fashion shows, top models like Ojy Okpe and Millen Magese have strutted down the runway in the latest designs from the likes of Tokyo James, Emmy Kasbit, and David Tlale.

By screening a socially conscious drama like Adekunle Adejuyigbe’s ‘The Delivery Boy’ and a popcorn flick like Akay Mason’s ‘Elevator Baby’, BAFEST has shown that indeed there is no such thing as a single story when it comes to African or Nigerian creative expression and there remains room for inclusion and diversity in our storytelling.

Giving a speech at the 2019 ART X, Wigwe reiterated Access Bank’s continuous investment in the industry as a reflection of their understanding that “art is a fundamental part of our culture, and it inspires our drive towards preserving a vital part of our history as Nigerians and Africans.”  This came with the Bank returning as a partner to ART X; a platform that has grown to be an influential showcase of the most innovative contemporary art from the African continent and diaspora.

This partnership further highlights Access Bank’s brand position as a lifestyle choice for anyone around the world seeking a gateway to the African continent. Access Bank has become a visible part of the premiere art celebration on this side of West Africa, endowing the event’s top prize for emerging artists.

Tokini Peterside, founder and CEO of ART X Lagos had this to say following the 2019 prize announcement, “Access Bank and ART X have moved beyond just being partners to becoming co-creators of the leading art prize and opportunity for emerging artists in Africa. The Bank has always believed in our vision and continues to support our remarkable journey.”

The Nigerian entertainment industry in a sweeping renaissance, particularly in the quality of products being churned out and the increasing levels of acceptance and consumption by both local and international audiences. Global Entertainment and Media Outlook, a report by PwC, concludes that the music and entertainment industry in African countries like Nigeria is projected to grow by 21.5 percent, with revenue reaching $9.9 billion by 2022.

Chimamanda Ngozi Adichie led the literary charge for the better part of the last decade. Burna Boy, Wizkid and Davido have been recognized as global stars and Nollywood even made an attempt at the Oscars. While all of these achievements are incredibly empowering, it would be impossible to continue or sustain the work of these trailblazers without the requisite empowerment platform for young and upcoming creatives.

Access Bank has shown a deep understanding of the gaps present in the African creative industry and its support of the three editions of the Africa International Film Festival (AFRIFF) since 2016 speaks aptly to that. Founded by Chioma Ude, AFRIFF –  which enters its 10th year in 2020 – has been Africa’s most important showcase of films from the African continent and the diaspora. Filmmakers like Eric Aghimien, CJ Obasi, Abba Makama, and all exciting tastemakers have had their attention-grabbing works screened at the festival. 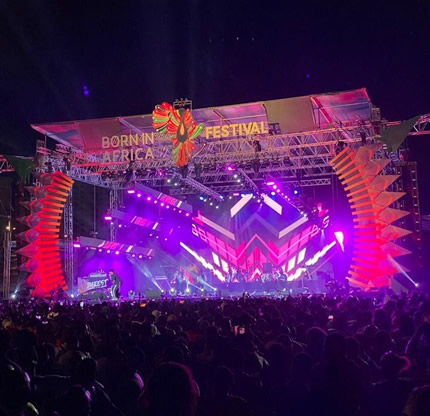 Supporting AFRIFF is definitely on-brand for Access Bank as AFRIFF has held on to the responsibility of nurturing filmmakers interested in breaking the norm or pioneering new visions or techniques in the way that African film is assessed. AFRIFF has also distinguished itself as a rich training ground for upcoming filmmakers along the entire industry value chain.

Representation matters and telling the African story must go beyond supporting finished products. Little can be achieved without structural and technical competence from ideation stages to finished products. Last year, Access Bank also took on the responsibility of bringing industry players and key stakeholders in the entertainment sector together under one roof, to educate and interact with each other on how to access finance for their businesses. Access Bank took a step further to provide necessary support such as legal; tax and business plan development support to entertainers willing to access the funds.

Supporting the arts on the continent isn’t a light task to take up but Access Bank continues to show us the importance of taking it up anyway. The impactful, wide-reaching place Access Bank has occupied in Africa’s entertainment industry through Nigeria is a testament to what can be done when more support is afforded an industry that will continue to innovate, create, build and inspire regardless of existing stymies.