Shareholders of Zenith Bank Plc, on Monday, at the 29th Annual General Meeting of the Bank held at the Shehu Musa Yaradua Centre, Abuja unanimously approved the proposed final dividend of N2.50 per share, bringing the total dividend payment for the 2019 financial year to N2.80 per share with a total value of N87.9 billion. This followed the recent release of the Bank’s audited financial results for the 2019 financial year.

According to the audited financial results for the 2019 financial year, Zenith Bank recorded a profit after tax (PAT) of N208.8 billion, an increase of 8% from the N193 billion recorded in the previous year, thus achieving the feat as the first Nigerian Bank to cross the N200 billion mark. 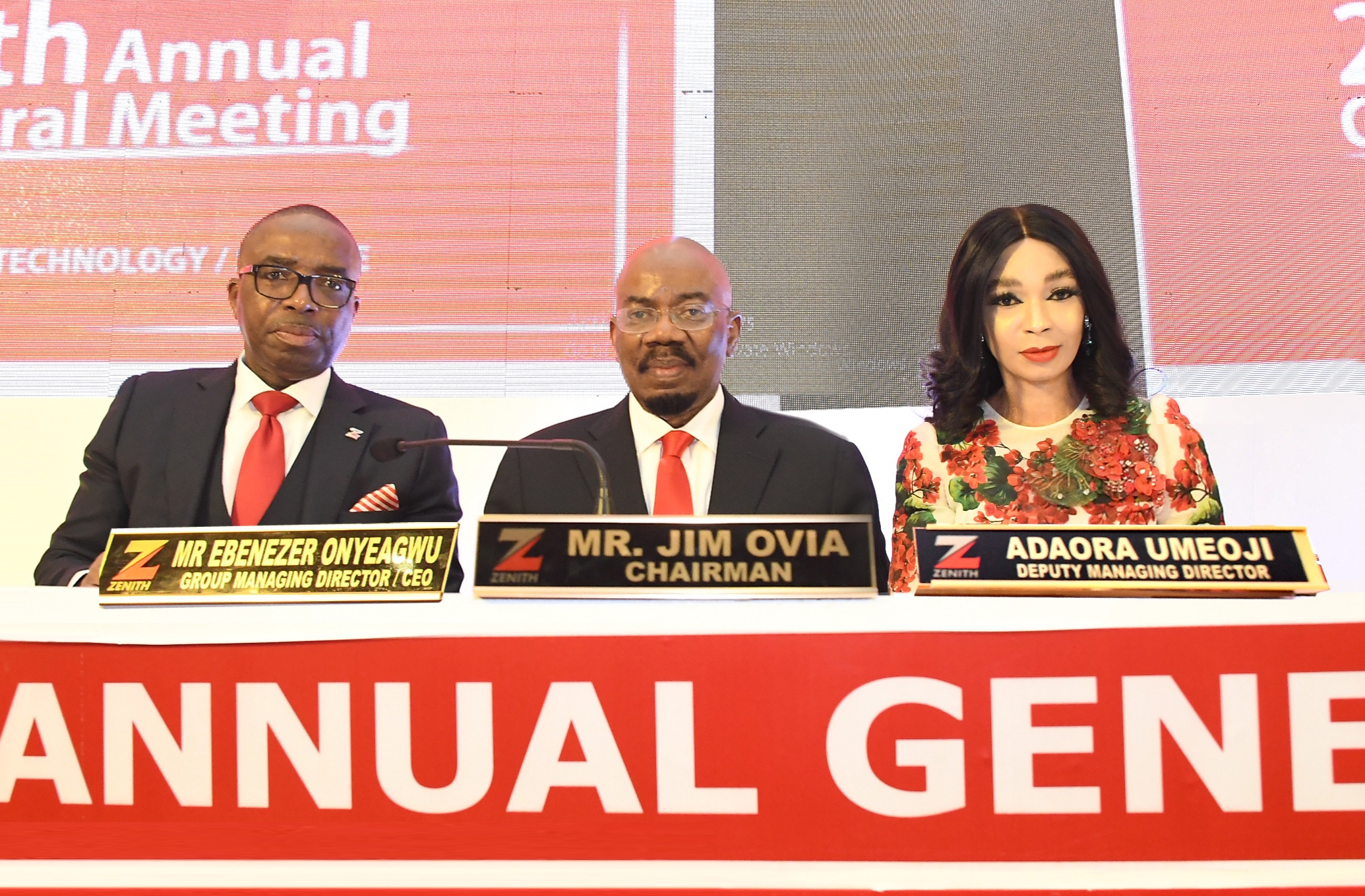 Profit before tax also increased by 5% growing from N232 billion to N243 billion in the current year, arising from topline growth and continued focus on cost optimisation strategies. cost-to-income ratio moderated from 49.3% to 48.8%.

The drive for cheaper retail deposits coupled with the low-interest yield environment helped reduce the cost of funding from 3.1% to 3.0%. However, this also affected net interest margin, which reduced from 8.9% to 8.2% in the current year due to re-pricing of interest-bearing assets. Although returns on equity and assets held steady YoY at 23.8% and 3.4% respectively, the Group still delivered an improved Earnings per Share (EPS) which grew 8% from N6.15 to N6.65 in the current year.

The Group increased its share of the market as it secured increased customer deposits across the corporate and retail space as deposits grew by 15% to close at N4.26 trillion. Total assets also increased by 7% from N5.96 trillion to N6.35 trillion. The Group created new viable risk assets as gross loans grew by 22% from N2.016 trillion to N2.462 trillion. This was executed prudently at a low cost of risk of 1.1% and a significant reduction in the non-performing loan ratio from 4.98% to 4.30%. Prudential ratios such as liquidity and capital adequacy ratios also remained above regulatory thresholds at 57.3% and 22.0% respectively.

In recognition of its track record of excellent performance, Zenith Bank was voted as the Best Commercial Bank in Nigeria 2019 by the World Finance and the Best Digital Bank in Nigeria 2019 by Agusto & Co. The Bank was also recognised as Bank of the Year and Best Bank in Retail Banking at the 2019 BusinessDay Banks and Other Financial Institutions (BOFI) Awards. Most recently, the Bank emerged as the Most Valuable Banking Brand in Nigeria, for the third consecutive year, in the recently released Banker Magazine “Top 500 Banking Brands 2020”, the Best Bank in Nigeria 2020 in the Global Finance World’s Best Banks Awards 2020, and the Bank of the Decade (People’s Choice) at the Thisday Awards 2020.

Zenith Bank Plc on Tuesday disclosed insider dealings of 3,000,000 shares in line with the new Nigerian Stock Exchange (NSE) policy. In a note signed by the...
Read more

Following the recent release of Zenith Bank’s audited financial results for the 2020 financial year, shareholders of the bank, on Tuesday at the 30th...
Read more
- Advertisement -