Since the first case of coronavirus disease (COVID-19) was confirmed in Wuhan, China late last year, the virus has exploded into a global pandemic as it has spread to 210 countries and territories. According to data compiled by Johns Hopkins University on 13th April 2020, the disease has killed about 115,244 people and infected 1,866,460 people worldwide. The pandemic has sent shockwaves throughout the global economy and billions of people into lockdown as health services struggle to manages case and contain further spread of the virus. 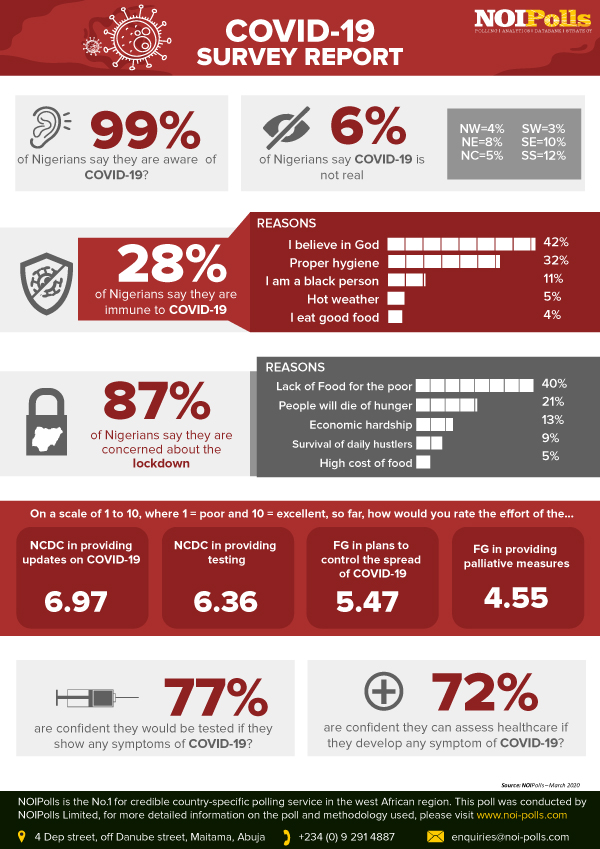 The poll result revealed that almost all adult Nigerians (99 per cent) are aware of the outbreak of coronavirus disease in the country. Trend analysis shows a significant 15 per cent increase in the proportion of Nigerians who are aware of the outbreak when current results are compared with figures obtained in March. This is not surprising given that President Buhari, had on the 29th of March 2020, made a national broadcast on the country’s steps to contain the virus which included a lockdown of 3 states (FCT, Lagos and Ogun) for 14 days and some other states have independently issued lockdowns and restricted movements. Also, the Nigeria Centre for Disease Control (NCDC) regularly sends text messages to alert the citizens on the need to stay safe by adopting safety measures provided by health advisories.

It is shocking to know at this stage that some Nigerians (6 per cent) consider the COVID-19 outbreak in Nigeria to be fake. During the survey, respondents in this category disclosed that they believe the outbreak is real in other countries but not in Nigeria, while some mentioned that they don’t believe it is real because they have not seen anybody infected by the virus in their states, others specified that it is propaganda and a means for the government to embezzle funds.

Similarly, it is outrageous to note that the poll revealed that 28 percent of adult Nigerians maintained that they are immune to the virus. Further probing of respondents who held this belief established that 42 percent of them held this belief mainly because they believe in God, while 32 percent believed they were immune because they observe proper hygiene which prevents them from contracting the virus amongst other reasons.

Read Also:  Engineering Graduates Will no Longer be Positioned to Teach by NYSC, in The Newly Stated Law
- Advertisement -

With regards to concerns with the lockdown, 72 percent of respondents specified that they have concerns about the lockdown. These concerns included lack of food for the poor (40 percent), that people will die of hunger (21 percent), of economic hardship (13 percent) and the survival of those whose livelihood depends on daily hustling (9 percent) amongst other concerns mentioned.

Further findings showed that Nigerians rated the Nigeria Center for Disease Control (NCDC) 6.97 out of a score of 10 in providing information or updates on COVID-19 and 6.36 in providing testing to those that need to be tested in the country. Similarly, the Federal Government was rated slightly above average (5.47 out of 10) in providing directives on how it plans to control the spread of the virus but was rated poorly in providing palliative measures to ensure that Nigerians follow its directives. It is therefore important for the government and well meaningful Nigerians to assist more citizens, especially the poor and those whose livelihood depends on daily income as mentioned in this survey, with more palliatives. This will ensure that Nigerians follow the stay at home directive and help control the spread of the virus in the country. These are some of the key findings from the COVID-19 poll conducted in the week commencing April 1st, 2020.

The COVID-19 pandemic is a major global health crisis and the greatest challenge faced since World War II. The virus has spread to every continent with cases rising daily globally. Nations are battling to slow the spread of the virus by testing and treating patients, carrying out contact tracing, limiting travels and movement, quarantining citizens, and cancelling large gatherings such as sporting events, concerts, and schools. The pandemic moves like a wave, one that may crash on any country that is not able to contain the spread as it has the potential to create devastating social, economic and political crises that will leave deep scars.

As of April 13th, 2020, the rate of infection globally has crossed the 1 million mark. According to data from Johns Hopkins University, there are 1,866,460 people infected across the world with 115,244 death and remarkably, 433,915 recoveries. Currently, the USA is the country with the highest number of confirmed cases which stand at 560,433.

In Africa, 52 out of 54 countries have confirmed cases of COVID-19. The infection rate is about 15,209 confirmed cases, 794 deaths and 2,961 recoveries. In Nigeria as of 12th April 2020, a total of 323 confirmed cases has been recorded across 19 states with 10 deaths and 85 recoveries. Lagos states remains highest with 176 confirmed cases while Abuja has 56 confirmed cases. Against this background, NOIPolls conducted its second public opinion poll on COVID-19 to gauge the perception of Nigerians regarding awareness, lockdown order as well as ascertain the level of concern in the country.

Fighting for Africa against COVID-19: Why the African Marshall plan needs to be implemented

With the industrialised world announcing plans to lift all the Covid-19 restrictions, President Buhari and his AU colleagues should insist the programme includes an...
Read more

Rising mortality as Africa marks one year of COVID-19

FIFA and WHO #ACTogether to tackle COVID-19

Almost a third of people globally have gained weight during the pandemic, despite awareness of the link between obesity and COVID-19 outcomes. A new global...
Read more
- Advertisement -