NEW YORK, US – Media OutReach – April 17, 2020 – On April 16 2020, Nobel laureates, including Peace laureates and winners in Medicine, Chemistry, Physics, Economics and Literature, will announce they are calling for the release of human rights lawyer Steven Donziger from house arrest. Donziger helped rainforest communities win a landmark judgment against Chevron for polluting the Amazon in Ecuador, and he has been targeted by Chevron with a vicious retaliation campaign. He has been under house arrest for over 250 days in New York City, in part for refusing to hand over confidential case files and client communications to Chevron. It’s thought to be the longest pretrial detention for a contempt charge for a lawyer in U.S. history. 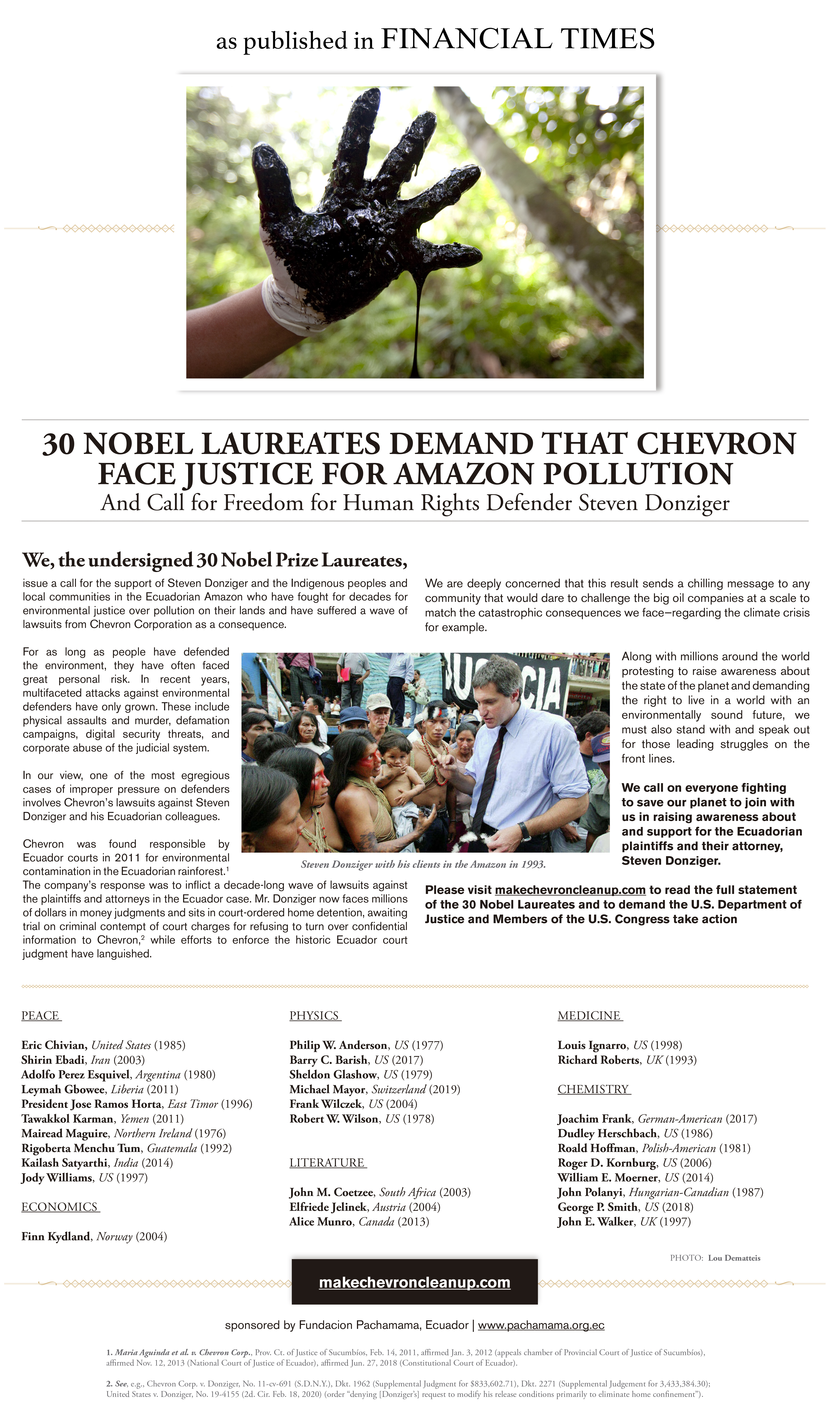 Supporters asking for the release of Steven Donziger included:

Background: In 2011, human rights attorney Steven Donziger helped Ecuadorian Indigenous peoples and local communities win a landmark $9.5 billion judgment against Chevron for toxic pollution in the Amazon rainforest, where the company operated as Texaco from 1964 to 1992. Chevron was found to have deliberately dumped more than 16 billion gallons of toxic wastewater, spilled roughly 17 million gallons of oil, and abandoned toxic waste in 916 unlined open pits. It admitted to the deliberate pollution as a cost-saving measure.

Donziger has been on indefinite house arrest in New York since August 2019 under legal attack by Chevron and a private law firm appointed to prosecute him.

The law firm, Seward & Kissel, has deep ties to the oil industry and recently admitted that Chevron is a client. Chevron’s legal assault is intended to smear Donziger, prevent Ecuadorians from obtaining justice, and intimidate human rights lawyers and advocates who dare to stand up to the fossil fuel industry. Now 30 Nobel laureates have joined Rainforest Action Network, Global Witness, Amazon Watch and other NGOs, plus Alec Baldwin and Roger Waters, in supporting one of the earth’s leading defenders. Indigenous peoples — including several still living in voluntary isolation — and rural communities are under threat in the Amazon from large-scale industrial development, especially policies and activities related to extractive industries like oil and mining.