To mark its 21 years of groundbreaking strides in the distribution ecosystem in Sub-Saharan Africa, TD Africa has reached out to the less-privileged with a visit to the Modupe Cole Memorial Child Care and Treatment Home, Akoka, Yaba; where it donated food items and other essentials to the children of the institution.

Meanwhile, plans have also been finalized to commemorate the 21st anniversary with a digital party in line with the on-going regime of social distancing occasioned by the COVID-19 crisis.

The party, which will feature a popular disc jockey, DJ Big N, will be hosted on TD Africa’s Instagram Live by 8 pm today, Friday, May 15, 2020.

Management and staff of TD Africa, partners, customers, well-wishers as well as its followers on social media are expected to join the Instagram Live session for the digital party, the first of its kind to be hosted by a Nigerian corporate organization. Participants are also in line to win some freebies including shopping vouchers during the course of the party. 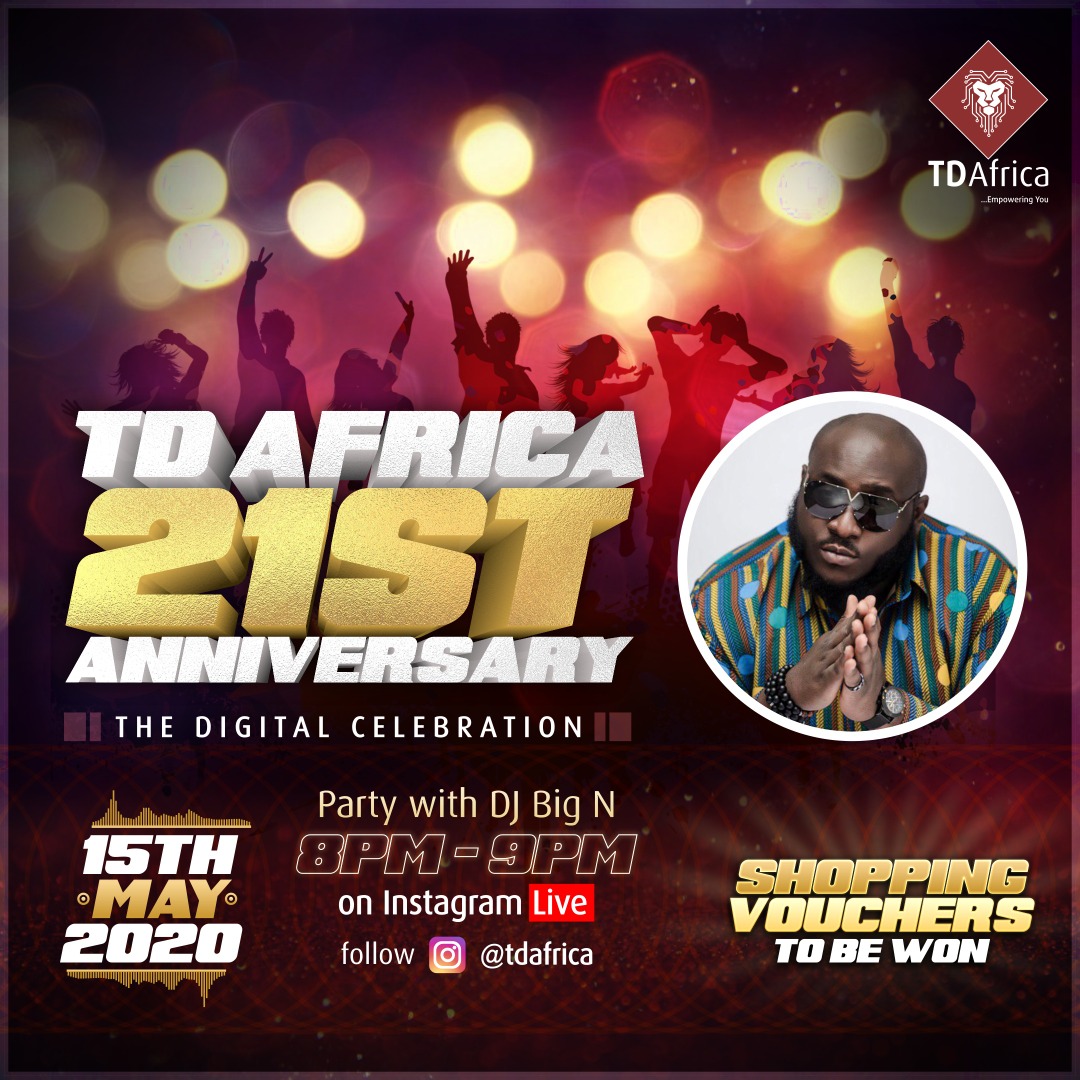 As part of activities to mark its 21st anniversary, TD Africa gave its partners something to remember by hosting a treasure hunt on its website – www.tdafrica.com – which afforded some lucky partners a chance to enjoy 95% discount on products discovered hidden on the site. Among the mouthwatering products won by the lucky partners was the HP 15 Notebook, Samsung 40-inch TV and Nokia 5 smartphone, among others. In addition, partners in Lagos also enjoyed free delivery on all orders worth $100,000 and above.

TD Africa began operations in Nigeria in 1999 as the pioneer bulk distributor of technology products in the West African sub-region for Original Equipment Manufacturers (OEMs), such as Hewlett-Packard (HP), Microsoft, APC and Epson.

Upon assuming its leadership role as a technology distribution giant, TD Africa introduced several reforms into the market, which included the formulation of a clear-cut policy on the channel of distribution, which led to the adoption of the prevailing four-tier market structure, comprising manufacturers, distributors, resellers and end-users.

This development, coupled with TD Africa’s high capacity to stock genuine products, brought relief to all stakeholders, by ending decades of problematic reliance on overseas-based distributors, just as it effectively countered the prevalence of substandard products.

Today, the distribution giant has expanded its brand portfolio to include a wide range of global technology brands from the likes of IBM, Dell, Cisco, D-Link, Huawei, Lenovo, Zinox, Infinix, Tecno, Nokia, Bosch and Samsung.

As result, TD Africa has become a bulwark when it comes to servers, laptops, desktops, accessories, smartphones, network, UPS, batteries, system software, system security, and electronics, among others.

Commenting on the giant strides recorded by the brand in the last 21 years of existence, Coordinating Managing Director (CMD), TD Africa, Mrs Chioma Chimere stated that the company’s achievements have become a reference point of what a successful brand should look like. She added that TD Africa would continue to do all its best to satisfy the yearnings of stakeholders within its legal framework of operation.

“TD Africa’s 21st anniversary tells a story of how far the brand has gone in overcoming challenges associated with the market. As we mark 21 years in the business of solution distribution, we are happy with what TD Africa has to turn out to be in Africa’s technology market. At TD Africa, we are not deterred by the enormity of any task but are determined as ever to take on such tasks and produce results. We have the courage to take on big challenges and see them through. And that is what we have demonstrated with our digital party, price slash and a visit to Modupe Cole Memorial Child Care and Treatment Home. Ordinarily, COVID-19 would have forced us not to mark this day. However, this is TD Africa where we do all within our reach to deliver on target, no matter the challenges.

“If you looked at where we are coming from, you would agree with me that TD Africa has come a long way. As at the time we came into the market 21 years ago, there was no indigenous technology distribution company to act as a stabilizing force. Therefore, it was difficult for OEMs to operate in such a difficult terrain where unwary end-users often end up purchasing substandard and adulterated products. Nevertheless, the coming of TD Africa changed all that. Today, end-users are assured of getting value for their money, just as OEMs are resting assured that their products are safe within our channel of distribution.

“As we move ahead in our next decade of existence, we want to assure our stakeholders that the best of TD Africa is yet to come. We know the expectation from stakeholders and we are not going to disappoint,’’ she concluded.

All is set for the digital party on Instagram Live which will bring a fitting closure to the day’s celebration for Africa’s distribution giant, TD Africa.

From today, young people around the world will be able to apply for funding to support innovative Local Solutions to address the impact of...
Read more

The Central Bank of Nigeria, (CBN) has announced plans to halt foreign currency for sugar and wheat imports, as the country tries to conserve...
Read more

Remote working and distance learning amid an ongoing pandemic continue fuelling global demand for PCs. However, there has been a significant difference in demand...
Read more
- Advertisement -