The National Bureau of Statistics (NBS) released Q1-2020 GDP data which reflected a growth of 1.87% in real terms against 2.10% recorded in the same period in 2019. This is probably indicative of the 3.4% contraction predicted by the IMF for FY-2020. Oil sector growth settled at 5.04% YoY vs 6.36% YoY in Q4-2019. Overall growth performance was weighed down by the non-sector (1.87% YoY vs 2.55% YoY in Q4-19), which fell to the lowest point since seven (7) quarters. The decline in output can be attributed to the impact of the global health crisis which has led to a plunge in internal economic activities and a significant slowdown in international trade. Hence, global demand for crude oil also reduced with a significant drop in oil prices. In comparison with Q4-2019 GDP data, Q1-2020 is lagging by -0.68%.

The Oil sector grew by 5.06% YoY reflecting an improvement in crude oil production as estimated by NBS to be 2.07mb/d in Q1-2020 (vs 1.99mb/p in Q1-2019). However, the sector’s contribution grew by 0.1bps to 10% in the reference period when compared to Q1-2019. The growth in the sector can be attributed to the sustained stability in the Niger Delta as well as new output from the EGINA FPSO. Nevertheless, we highlight that there were some reported cases of shutdowns across the Trans Forcados, Bonny, and Brass terminals, owing to repairs and maintenance.

The Manufacturing sector, on the other hand, posted slower growth from 0.81% in Q1-2019 t0 0.43% in Q1-2020. Underlying reasons could be the competition in the space and the low purchasing power of consumers as inflation bites hard amidst border closure, FOREX restrictions as well as reduced international trade as a result of supply chain disruption caused by the coronavirus. Financial institutions grew by 24% as reflected in loan book expansion across the sector. Hence, we reinforce the fact that proactive structural reforms are needed to unlock productivity in the economy. Strangely enough, the real sector (agricultural & manufacturing) didn’t feel the impact. 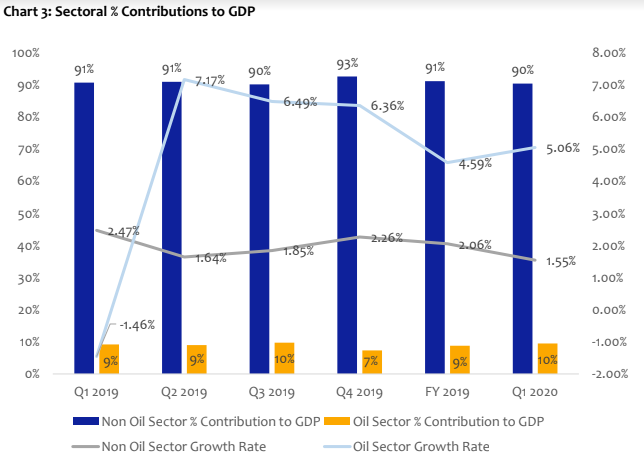 The uncertainty due to the Coronavirus outbreak has shadowed prospects for growth in 2020. OPEC’s oil supply deal with coalition partners is expected to provide some support to crude prices. Recall, Nigeria had over 84 million barrels of unsold crude oil as estimated by Bloomberg in April while some production companies have been forced to shut down operations for maintenance and repair reasons. However, the number of unsold crude oil is likely to decline in coming months, given the gradual easing in lockdown globally.

Read Also:  Shifting the Appetite of Nigerian Investors: From Savings to Mutual Funds 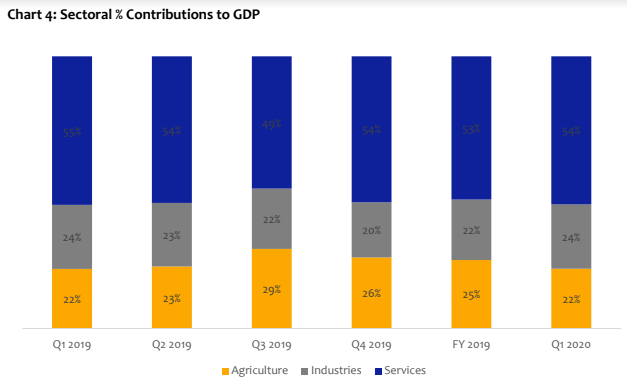 We expect the non-oil sector to contract in the near to medium term on the back of challenging business environment Also, tight consumer wallet is expected to slow down trade activities thereby weighing on overall output growth. The non-manufacturing PMI index in March indicated a contraction in the services sector, as it fell to a 3-year low of 49.2 points amidst contraction in new orders, employment level and inventories. The PMI survey was likely carried out before the lockdown was imposed, so we expect PMI reading to significantly worsen in the coming months. However, we expect the magnitude of overall decline to be mitigated by sustained but slower growth in the telecommunication sector. The agricultural sector is expected to grow at a much slower pace while displaying resilience. But disruption of farm output supply chain might worsen the scenario. Given the foregoing, we expect Nigeria’s economy to slip into a mild recession before the end of the year.