All Set For Second Edition Of Konga Live Auction On Monday

Excitement and anticipation have reached fever-pitch for the June edition of the live online auction pioneered by foremost composite e-commerce giant, Konga.

A monthly affair which holds every first Monday, the June edition is set for Monday, June 1, 2020, from 12pm. 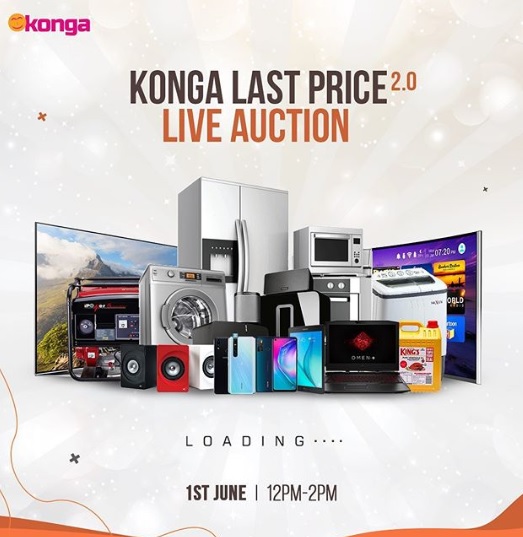 Already, a wide range of star products spanning a number of categories has been lined up for the live online auction. They include computing and mobile phones, Home & Kitchen appliances, FMCG products, consumer electronics, wine and spirits, among others. Also, a number of top brands including Samsung, Haier Thermocool, HP, LG, iTEC, Kenwood, Infinix, Tecno, among many others, have partnered with Konga for the June edition of the live online auction.

Indeed, Konga had made history specifically on Friday, May 1, 2020, as the e-commerce giant successfully hosted the first-ever live online auction in Africa. The event tagged Konga Last Price, which was hosted concurrently across Konga’s social media channels and the website, attracted over 25,000 bargain-hungry shoppers who participated in the auction.

Following the success of the inaugural edition of the monthly auction, bargain-hungry shoppers have expressed their eagerness to take part in the next edition scheduled to hold on Monday.

Also adding a touch of extra buzz to the event is the expectation among shoppers, some of whom failed to win any bids during the first edition held last month.

‘‘I am determined to be among the lucky bidders this time round,’’ said Ife Bakare, an entrepreneur. ‘‘I bid so hard during the first edition in May but I was unlucky as the competition for the products I was targeting was very stiff. However, I am ready for this Monday’s auction. It is my turn to win and no one can stop me,’’ she declared.

Also, Mustapha Abubakar, a bank staff, revealed that he would be taking Monday off work in order to enable him to focus on the live online auction.

‘‘I have identified some products which I am keen to get my hands on. Going to the office on Monday will be a big distraction as I will not be able to participate fully in the auction. That was what happened during the first edition last month. So, I have already applied for a day off on Monday to enable me to concentrate on the live auction. It’s an opportunity I am not willing to let go off.’’

For the latter two – the timed auction on the Konga website and flash sale on social media, price slashes will be announced at the commencement of the live auction. Bid winners will follow the regular check-out process and can use the Payment on Delivery option. However, intending participants on the social media live auction are expected to submit their bids via comments with their name, phone number, product and bidding price, with each participant allowed to purchase a maximum of three products per category. Subsequently, bid winners will be contacted for payment confirmations via bank transfers at the end of the social media live auction.

Equally important – the first edition which was used by Konga to gauge the appetite of customers and also take stock of areas of improvement – recorded encouraging levels of participation. Some shoppers have also pleaded with the management of Konga to make the revolutionary auction, the first-ever hosted to be held in Africa by an e-commerce company, a bi-monthly affair.

The impact of the 2019 Coronavirus on the African continent has been devastating, not only to the people and their livelihoods but also to...
Read more
- Advertisement -