The performance of the Non-Oil Sector was weak during the quarter, reflecting the impact of the macroeconomic challenges and impediments to growth. In our view, we believe that the persistent pressures related to high unemployment levels, low income, and by extension – low aggregate demand; played a major role in the slowdown in the economic growth recorded in Q1’20. While we note the impact of the COVID-19 pandemic in the economy, we yet posit that the implication did not significantly weigh on Q1’20 performances. For instance, Nigeria reported its index case on February 27, 2020. The announcement of shutdowns and lockdowns occurred in late March, which was at the end of the quarter. We believe that the impact of the pandemic will be pronounced in Q2’20 numbers.

We highlighted 11 major sectors that contributed 94% to overall GDP when combined. Save for the crude petroleum and financial and insurance sectors, the other nine sectors recorded a weak growth on a YoY basis. See the table below.

The Agricultural sector was the biggest contributor to total output, with a 22% contribution. The real GDP growth in the sector slowed in Q1’20 to 2.20%, relative to 3.17% in Q1’19. On a quarter-on-quarter basis, real GDP growth also lowered from 2.31% in Q4’19. The performance of the Agricultural sector was a negative surprise, in our view, given the consistent efforts of the Federal Government, and the Central Bank of Nigeria (CBN) to provide improved funding to the sector. Tellingly, in our view, the problems of the Agricultural sector seem to be beyond funding. We highlight other major issues affecting output growth in the sector to include poor storage, poor transportation, weak infrastructure, and inefficient methods of farming – all of which have a negative impact on scaling.

Trade GDP recorded a decline for the fourth consecutive quarter, with a 2.82% decline in Q1’20 representing the highest quarterly decline in the last five quarters. From our perspective, we link the decline of the Trade GDP to the sustained border closure in the economy.

We note that the Information and Communication Sector (InfoComms) has been the major growth driver of the Nigerian economy. The trend continued in Q1’20, albeit lower than previous growth levels. The InfoComms sector grew by 7.65% YoY, relative to 9.48% in Q1’19 and 10.16% in Q4’19. The slowdown in InfoComms had an overall impact on total GDP growth in Q1’20.

The Manufacturing Sector grew by 0.43% YoY, relative to 0.81% in Q1’19 and 1.24% in Q4’19. The manufacturing sector contributes between 9% – 10% to total output; hence, the slowdown in the sector had a significant impact on total output growth. We attribute the sub-par performance (c.1% growth) of the Manufacturing Sector to low investments in the economy owing to the relatively high cost of doing business, as well as other structural bottlenecks in the economy.

The woes of the Real Estate sector persisted in Q1’20, as reflected in the 4.75% decline in output. The output decline in Q1’20 represented the biggest decline in the last five quarters.

The most improved sector of the quarter was the Financial and Insurance Sector. The Financial and Insurance Sector picked up from where it left in Q4’19, by recording 61 basis points QoQ increase from 20.18% in Q4’19 to 20.79% in Q1’20. On a YoY basis, there was a significant rebound from -7.60% in Q1’19 . We attribute the significant improvement to the continued impact of the CBN’s heterodox policies which resulted in expansion of loan book by financial institutions. 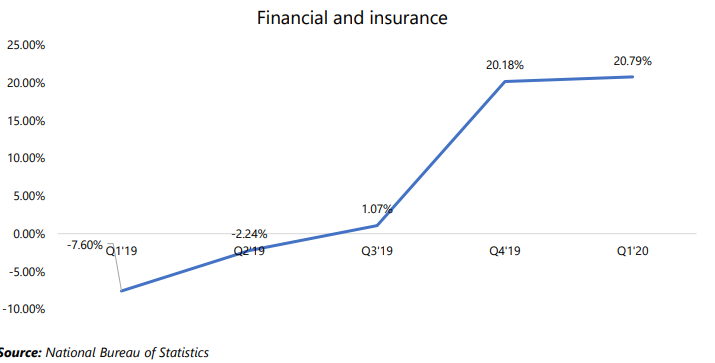 We had initially estimated an FY’20 GDP growth of 2.40% on the back of the following assumptions:
i. Early passage and improved implementation of the 2020 budget
ii. Stable crude oil production
iii. Favourable crude oil prices
iv. Stable exchange rate
v. Increased private sector lending
We also highlighted the risks to our forecasts to include:
i. Lower-than-expected revenue generation by the Federal Government
ii. Unfavourable crude oil prices

In light of the recent developments in the global economy and in the Nigerian economy, resulting from the impact of the coronavirus pandemic, the situation has changed significantly, and our risk factors have materialised. We expect a significant economic slowdown Q2’20 and a possible economic recession in Q3’20. The negative outlook of the economy stems from the impact of the reduced economic activities due to the social distancing directives and economic lowdown (particularly in Q2’20). Although the economy is in a gradual phase of lockdown easing, we yet do not expect a quick recovery. The loss of jobs and income is expected to have a bearing on economic output.

The disproportionate increase in financial institutions sector growth relative to other non-oil sector performance suggests that the policies of the CBN aimed at increased lending to the private sector have limited impacted on output, In our view, we think that the increased fund mostly goes to the refinancing of existing debts instead of capacity expansion by firms.

We expect to see a slowdown in the Oil Sector in subsequent quarters due to compliance to the recent agreement by OPEC and her allies to cut output to stimulate prices. From our estimates, average daily production could oscillate between 1.7mbpd – 2.0mbpd. Overall, we expect the economy to decline by 2.12% in FY’2020, on the back of a decline in both the Oil and Non-Oil Sectors.