A leading contestant for the October 10, 2020 governorship election in Ondo State, Eyitayo Jegede (SAN), on Tuesday, stormed the National Secretariat of the Peoples Democratic Party (PDP) in Abuja, to obtain his nomination form ahead of July 22 primary election of the party. 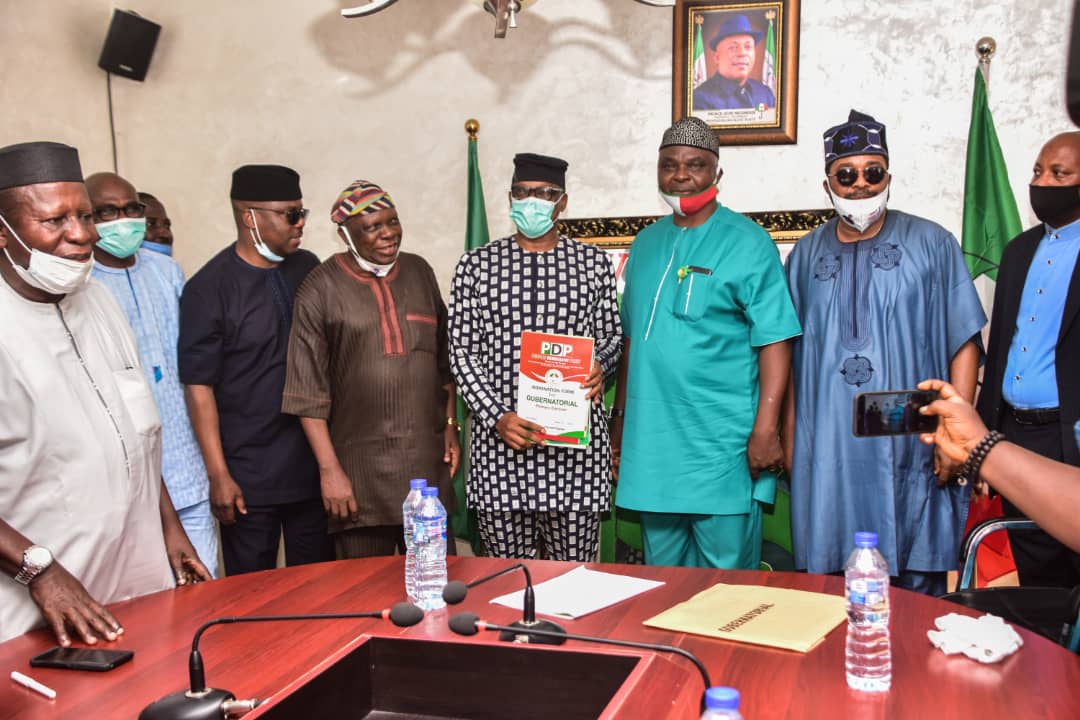 Jegede, a former attorney-general and commissioner for justice in the state, was accompanied to the Wadata House of the party, by his supporters which included a House of Representatives member representing Akure South/Akure North Federal Constituency, Hon. Adedayo Omolafe and Member, House of Representatives representing Okitipupa/Irele Federal Constituency, Hon. Ikengboju Gboluga.

Others include; a former Deputy Governor and former Ambassador and a member of Board of Trustee of the party, Otunba Omolade Oluwateru and Hon. Benson Amuwa, former NDDC Commissioner in the state.

Addressing Jegede and his entourage, the National Chairman of the party, Prince Uche Secondus, assured them of the credible and transparent primary election come July 22.

Secondus, who was represented by the Deputy National Chairman, South, Hon. Yemi Akinwonmi, said “It is our responsibility to conduct integrity base primaries. It is not our duty here to preach any zoning. We want to assure you that we will not do anything that is not normal.

“The party is known for conducting free, fair and credible primary elections and that of Ondo state will also be free and fair because we have a history of doing it right.

“We know you. You have done before and we assuring that every process will be transparent.

But observation is that since the Ondo people have been coming here for the form, I noticed they are all young men. The era of “Old school” is gradually fading away.”

Responding, the PDP aspirant, Eyitayo Jegede (SAN), said he’s coming to Wadata House for the collection of the form, signified the end to the APC government in the state.

Jegede said, “the forthcoming governorship election is the project of all the residents of the state, not an individual project. By the special grace of God, come October 10, 2020, PDP will be declared the winner of the election.

“Also, come February 2021, we will be sworn- in as the elected governor of the state on the platform of the PDP by the Grace of God. PDP is back and we are back for good. I am happy that you have assured that the party is known for transparency. We are ready to go into this and God willing, we are going to win the primary and go ahead to win the governorship election.”

- Advertisement -
Read Also:  7.58M Nigerians Are Registered Under the National Pension Scheme As At Q2 2017 - NBS

Jegede who is a successful senior lawyer with over 35 years experience in practice, was the candidate of the party in the 2016 governorship election in the state.

But he was not sure of flying the party’s flag until 48 hours to the election when the Appeal and Supreme courts dispensed with the suit brought before them by Mr. Jimoh Ibrahim and Senator Alimodu Sheriff.

Jegede came second in the poll despite his inability to campaign for the vote in the said election, to the present governor of the state, Oluwarotimi Akeredolu.

He was the Attorney General and Justice Commissioner in Ondo State for seven and half years, the longest-serving Attorney General in the history of the State, a position he got purely based on merit rather than politics.

Manufacturers, PDP Denied The Moves Against Planned Hike In VAT

Disputant arose on Thursday against the intention of the federal government to raise Value Added Tax (VAT) from the extant 5 per cent to...
Read more

2019 General Election: Low Awareness of Electorates on Most Political Parties in Nigeria

A recent public opinion poll conducted by NOIPolls has revealed that apart from the two most popular political parties in Nigeria – the All...
Read more

Will ”The Next Level” ”Get Nigeria Working Again”?

Earlier, 90-days to the 16t h of February 2019 slated for the Presidential election, the veil for official campaigns was lifted and it started...
Read more
- Advertisement -