The FGN bonds space continued its tales of halves, bullish at the head while the belly and the tail remained bearish. We saw yield compressed by an average of c.46bps at the short-end of the curve D/D as the 2023s remained the highest winner amongst these papers mostly bided at 4.10% levels with few offers available to match.

On the other hand of the curve, we noted more offers for 2049s and 2050s which started the day at 10.85% but weakened by 5pts to close the day offered at 10.90%. The mid- and long-end of the curve remained flat, with a slight uptick on the 2037s maturity expanding by c.3bps by the business close.

With the state of liquidity in the interbank market, we expect the trade volume to remain low with sustained bearishness at the tail of the curve. 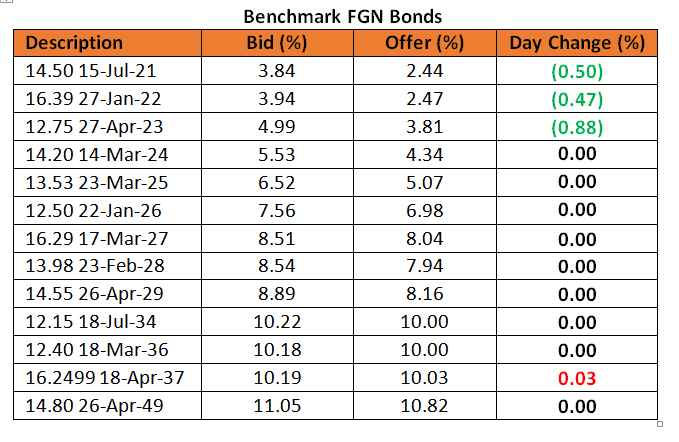 The Treasury bills space traded on a chaotic note as rates soared another c.50bps D/D on OMO bills continuously triggered by the tightness in the interbank market causing saw a wave of bears in the market scrambling to offload OMO bills to raise short-term funding. Most of the market offers were largely skewed to the short- and mid-dated bills, especially the September and January papers which were offered at 5.00% and 6.30% levels respectively. We saw traction, albeit in small sizes, for the latest OMO issue 8th June 2021 as the bill settled around mid 6% levels. Subsequently, yields expanded by an average of c.6bps across the OMO curve.

The NTB space wasn’t left out in today’s action with more retail offers on the short- and mid-dated papers at 1.10% and 1.70%. The benchmark NTB curve stayed flat D/D with little volumes changing hands.

We expect to see continuous bearishness in the Treasury bills in the interim as more banks seek to raise funding in light of the market tightness.

The drought in the interbank market persevered today as the market opened c.N274.30Bn negative, while most banks remained at the SLF window (N384Bn) for the 3rd consecutive session. Consequently, OBB and OVN rates inched higher to close at 20.00% and 21.00% respectively.

We expect rates to remain stable in the double-digit range as there are no inflows expected for this week expected to boost market liquidity.

The FX market remained sluggish today as pent-up demand remains unmet due to the scarce supply of the greenback. The IEFX window depreciated slightly by N0.25k, with traded volume ($11.96mio) dropping a whopping 88% D/D.

At the parallel market, the cash and transfer rates moved the most in recent times, depreciating by an average of 1.25k D/D to close the day at N460.50/$ and N463.50/$ respectively following a fresh wave of retail demand hitting the market.

The NIGERIA Sovereigns weakened in a relatively quiet session, with yields expanding by an average of c.9bps across the benchmark curve but little volumes traded. In the SSA space, the Angola papers continue to weaken as we saw continued sell-off from profit-takers, especially on the 2025s maturity while its yield rose by c.20pts D/D to close at 13% levels.

On the flip side, some NIGERIA Corps tickers saw some improved demand interests from local investors, most especially the FIDBAN 22s (-7bps). We also noted some weakness in the UBANL 22s (+56bps) and ETINL 2024s (+13bps), although we expect this weakness to be short-lived in light of an improved outlook for global oil prices.

CBN data show that Nigeria's gross official reserves declined by USD280m to USD34.82bn in March. In the name of accuracy, we should adjust this...
Read more

FGN Bonds The bearishness in the FGN bond market was sustained as the markets resumed this week, as market participants continued to react negatively to...
Read more
- Advertisement -