With widespread recessionary conditions in Q1 amid the COVID-19 pandemic—particularly
in emerging markets—the global debt-to-GDP ratio surged by over 10 percentage points in Q1 (Chart 1). 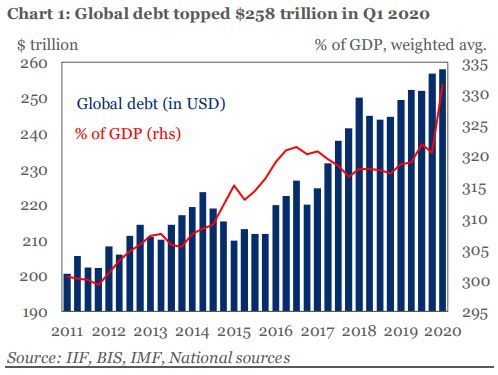 While this marks the largest quarterly increase in global debt ratios on record, the actual rise in debt was only $1.2 trillion—well below the average quarterly rise of $2 trillion over 2015-2019.

However, available data on issuance suggests that the pace of debt buildup has accelerated since March, largely reflecting the massive global fiscal and monetary response to the pandemic.

Governments accounted for over 60% of gross issuance in Q2. While rising debt levels will raise concerns about debt dynamics and creditworthiness, over 92% of government debt is still investment grade.

The corporate sector accounted for over 65% of the rise in the global debt-to-GDP ratio in Q1 2020. While total debt in the financial sector has risen by $8 trillion since 2016 to $64 trillion in Q1, over the same period non-financial corporate debt rose by $12 trillion to $75.5 trillion, a record high at 95% of GDP.

Looking ahead, we expect the rise in corporate debt to continue at an accelerated pace. With abundant central bank liquidity, the decline in borrowing costs for corporates has already led to a substantial surge in corporate bond and loan issuance since March, amounting to some $4.6 trillion in Q2—vs a quarterly average of $2.8 trillion in 2019.

Debt in mature markets has topped 392% of GDP, up by some 12 percentage points from 2019. With debt outside financial sector reaching close to 320% of GDP, the rise in debt ratios (ex-financials) has been most notable in Canada, France, the U.S. and Norway, each increasing over 9 percentage points in Q1 (Chart 3). Now topping over $185 trillion, total debt in mature markets is $22 trillion higher than in 2016, with the U.S. making up half of it. 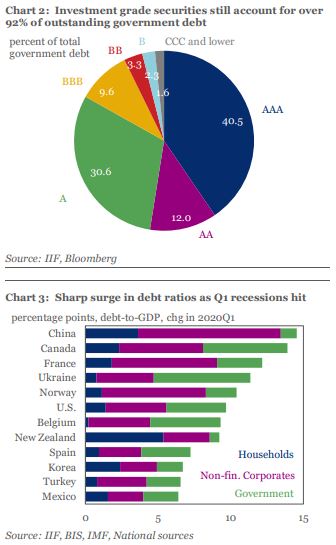 Total debt across all sectors (household, government, financial and non-financial corporate) increased from 302% of GDP to near 318% in Q1 2020. While this rapid increase marks the largest quarterly surge on record, available monthly data suggest that the pace of debt accumulation accelerated even further in Q2 and is fast approaching 335% of GDP.

We estimate that non-financial corporates accounted for some 60% of this rapid debt build-up in H1 2020.

Corporate defaults on the rise:

With corporate earnings plunging and credit downgrades on the rise, the face value of defaulted non-financial corporate bonds jumped to a record $94 billion in Q2 2020. The U.S. accounted for nearly 75% of this, followed by the Euro Area (14%) and China (3%).

Although this marks the highest volume of quarterly defaults on record, the volume of defaulted debt amounted to 5.5% of new issuance—slightly lower than seen at the peak of the 2008/9 global crisis (Chart 4).

Our updated tracker suggests that the share of SOE debt in non-financial corporate debt in EMs has been on a downward trend in recent years, now standing at less than 55% of sectoral leverage on average—vs over 58% in 2015.

However, as in previous stress episodes, we expect SOEs to play an important role in the post-COVID recovery phase, and this will likely induce a sharp rise in EM non-financial corporate debt—see the Global Debt Monitor Database.

EM FX debt remained broadly stable at around $8.4 trillion in Q1 2020, suggesting that EMs have been able to roll over their FX liabilities despite market tensions amid COVID-19.

However, the sharp depreciation in EM currencies against the USD, along with the steep contraction in output, prompted a surge in FX debt-to-GDP ratios in Q1 2020 — most markedly in Ukraine, Chile, Mexico and Colombia.

Some $3.7 trillion of EM debt will come due through end-2020, with FX-denominated debt accounting for nearly 17% of the total. Countries that face large upcoming FX redemptions in 2020 include China, UAE and Turkey.

Across the sectors, financial corporates have the largest refinancing needs in the remainder of 2020. Our estimates suggest that around $4 trillion of EM debt will mature in 2021—almost 18% in foreign currency

The new update of the IMF’s Global Debt Database shows that total global debt (public plus private) reached US$188 trillion at the end of 2018, up...
Read more
- Advertisement -