The FGN space traded on a very lethargic note with very few trades passing through the curve. The market opened one-sided, mostly bided from the mid to the long end of the curve with very few offers to match the bids.

Activities picked slightly by mid-day with few trades consummated on the 2034s and 2050s papers which settled around 9.88% and 10.70% levels respectively. Subsequently, Yields stayed flat on the short and mid-dated papers but compressed by an average of c.15bps on the longer-dated maturities by the close of business.

We expect the market to close the week on this calm note while local investor cherry-picks on the few bonds offered at attractive levels. 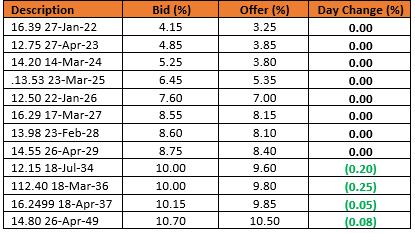 The OMO bills space traded on a quite active note today, with trading activities kicking off the day on short-dated papers.

The early hours opened with actions on the October and December bills with trades settling around the mid of 5%, however, by close of business, we saw some late hour tractions on the 08 June papers starting at 6.20% but lost approximately c.25bps to close the day at 5.95% on the offer.

As such we say yields compressed by c.66bps D/D across the OMO bill curve.

Contrary to the OMO bills, the NTB space traded on a very quiet note as attention shifted to the outcome of the PMA auction scheduled for today. At the PMA auction, DMO raised approximately c.N107BN the same amount on offer with rates dropping by an average of c.21bps across the three tenors offered.

We expect to see few actions on the NTB space mostly from retail clients, as they sought to fill their outstanding demands from today’s auction. 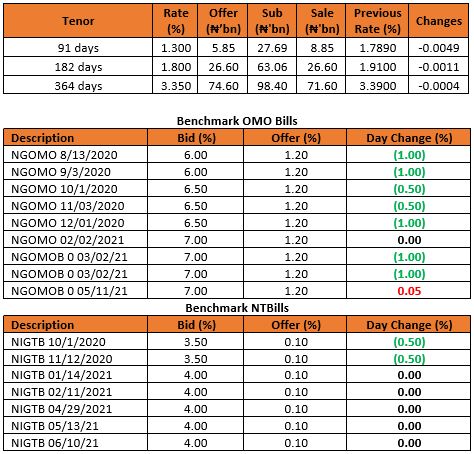 The interbank rates dropped slightly by an average on c.198bps which was supported by positive system liquidity of approximately N79BN. Consequently, OBB and OVN rates closed the day at 10.00% and 10.79% respectively.

We expect a respite in the interbank market tomorrow as inflows from retail refunds and OMO maturities are credited into the system while interbank rates will most likely drop to single-digits level.

At the FX market, The Naira depreciated by 0.50k at the I&E FX window, as supply squeeze continues to affect the general flow of funds which remained sparely low while most banks remained bided between N386/$ and N389/$. All other market segments stayed flat with the cash and transfer market closing the day at N465/$ and N467/$ respectively.

Read Also:  Henceforth, Loan Defaults Will Be Settled With Deposits From Other Banks

The NGERIA Sovereign tickers traded on a quiet note, although the market remained largely bullish across the curve as offers worsened across the curve. Yields compressed at an average of c.4bps, with gainers seen across the sovereign curve.

Contrary to the sovereign, the NGERIA Corps tickers traded on a bearish note, as yields continue to weaken among most tracked papers. The UBA 2022s and ZENITH 2022s weakened by c.30bps and c.10bps respectively.

The FGN Bonds market closed the week on a more active note, as positive sentiments continue to seep in for bond yields. We noted...
Read more

The Central Bank of Nigeria on the authority of The Debt Management Office (DMO) on behalf of the Federal Government Of Nigeria Offers for...
Read more
- Advertisement -