While the economic effects of conflict and political instability have been analyzed extensively, much less attention has been paid to how banks are affected.

Our IMF staff paper addresses this gap by investigating whether rising conflict and political instability globally over the past several decades has led to more banking crises in developing countries.

Our study focuses on the potential impact of conflict and political instability on the systemic banking crisis in 92 developing countries over the period 1970-2016. 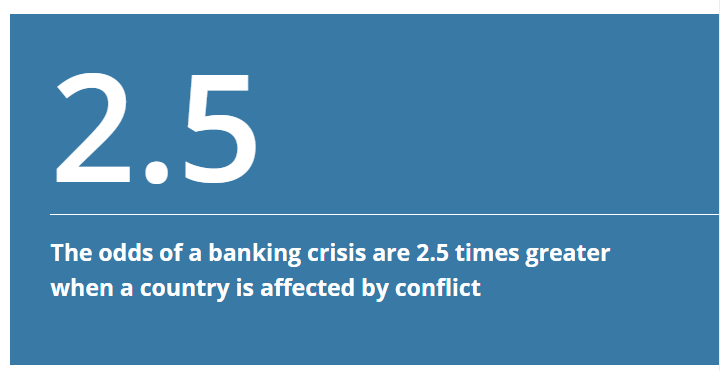 We find that the odds of a banking crisis are 2.5 times greater when a country is affected by conflict. Conflicts and political instability in neighbouring countries increase the likelihood of banking crises in a given country.

And the probability of experiencing a banking crisis is 25 percent when the conflict lasts 10 years, against 16.4 percent when it lasts two years.

Our chart displays the relationship between the number of countries in banking crises and in conflict. It shows that major waves of conflict tend to be associated with a higher rate of occurrence of banking crises. 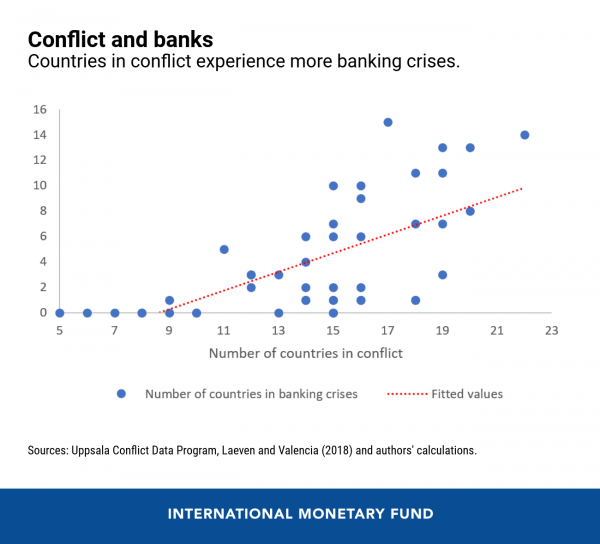 For instance, during the Sierra Leone civil war (1991-2002), more than 40 percent of banking system loans were non-performing and the license of one bank was suspended in 1994.

In the Central African Republic, bank non-performing loans increased to more than one-third of total loans and some banks became undercapitalized following the outbreak of the conflict in 2013.

The primary channel of transmission is the occurrence of fiscal crises following a conflict or political instability.

Conflicts and political instability can have a negative impact on the productive capacity of a country and this, in turn, can reduce government revenue and increase unproductive spending, including military expenditures, leading to fiscal crises. This can also lead to government dysfunctionality and weakening of institutions.

Governments facing conflict and/or political instability need to address their root causes and try to mitigate their negative effects with the appropriate design and implementation of economic policies.

Creating adequate fiscal space in normal times can reduce the likelihood of fiscal crises and in turn lower the probability of systemic banking crises.

Our findings also suggest that policymakers should pay attention to conflicts in neighbouring countries even if they themselves are not conflict-afflicted as their banking systems may suffer negative spillovers from their neighbours given that banks operate across borders.