Recently, International Breweries Plc published its unaudited H1-2020 financial result. According to the report, Revenue declined by 11.7%y/y to N60.6bn, dragged by the underwhelming performance in Q2-2020 (-24.7%y/y) amid the negative impact of the restriction in movements and social gathering since March-2020.

Overall, the company’s Loss before and after-tax worsened from N10.5bn and N6.8bn in H1-2019 to N12.0bn and N9.4bn respectively in H1-2020. Below, we update our model estimates for INTBREW, based on the recently published numbers and reassess our expectations for the rest of the year.

Restrictions in social gathering drag Q2-2020 Revenue: As expected, INTBREW’s revenue declined in Q2-2020 and H1-2020 by 24.7%y/y and 11.7%y/y respectively due to economic lockdown measures imposed from March-2020, especially in Ogun State (where the company’s factory is situated) and Lagos (where bars, pubs, and clubs where outrightly shutdown).

This hampered the brewer’s ability to push volumes. Clearly, the continued restriction on social gatherings, especially weekend parties such as the Nigerian wedding ceremonies
(very popular for its extravagance) and other forms of ceremonial social events across the country must have had a more telling negative impact on the topline number, during the period.

The bottom-line number received some support from Net Finance Costs, which declined sharply by 86.5% to N948.1mn after management used the proceeds from its right issue, closed out in Q1-2020, to offset N164.53bn debt during the same period.

However, this was not enough to protect the company from a deteriorated loss position as Loss-before and-after-tax further weakened from N10.5bn and N6.8bn in H1-2019 to c. N12.0bn and N9.4bn respectively in H1-2020.

INTBREW’s leverage (debt/equity) ratio improved to 0.7x (vs. 35.3x as at FY-2019) as managements used the proceed from the N165.0bn rights issue raised in Q1-2020 to deleverage the company’s balance sheet. Accordingly, the company’s leverage ratio now compares reasonably to peers – NB: 0.6x and GUINNESS: 0.2x.

Meanwhile, Cash and cash equivalents declined marginally by 0.6%ytd to N31.6bn and Net CAPEX dropped from N18.8bn to N6.3bn.

INTBREW rated a SELL at the current price

Our short-term outlook for the brewer remains underwhelming, especially if the ban on social gatherings remains in place throughout H2-2020.

However, we hold a more optimistic outlook on the company’s topline performance beyond 2020, as we expect economic activities to return to their pre-COVID-19 levels by Q1-2021. Yet, we expect the company’s high-cost structure (Cost-of-Sales margin of above 80.0%) to keep earnings depressed post-2020.

Also, given the company’s low cash position and our expectation for the earnings to remain depressed through 2021, we expect the company to revisit the Nigerian capital market, especially the debt market, ahead of the maturity of its outstanding term-loan of $278.0mn (or N107.6bn) on May-2021.

Although INTBREW’s management has entered into non-deliverable forward contracts to mitigate the forex risk on the contractual interest and principal repayments, the company is still exposed to FX losses in 2021, especially if the Nigerian FX market remains illiquid at the time of settling the outstanding debt.

Adjusting our model assumptions for the above, we revise our year-end Target Price to N2.25/share with a SELL rating on the stock. Also, the lack of prospect for the company to pay dividend either in 2020E and 2021E, makes the stock less attractive to domestic peers. 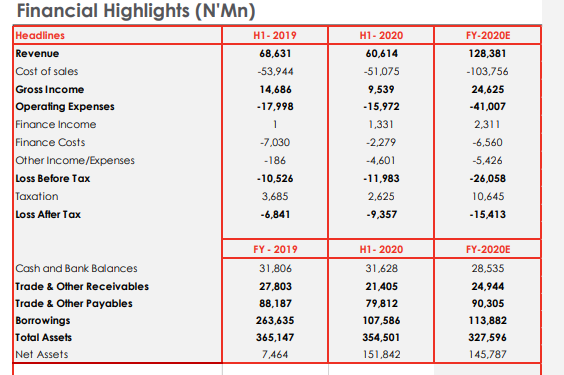 International Breweries Plc. (INTBREW) managed to sustain its upward revenue trajectory, after a shaky start to the 2020 financial year. The brewer reported a...
Read more

Recovery in Alcohol Demand Support Q3 Sales Unlike the first half of the year (where revenue was down 11.68% YoY), International Breweries Plc. posted a...
Read more
- Advertisement -