In the first half of 2020, Heineken’s markets and businesses were materially impacted by the COVID-19 pandemic. Given the unprecedented nature of the situation, HEINEKEN has increased its disclosures. There are no changes vs the announcement of 16 July. 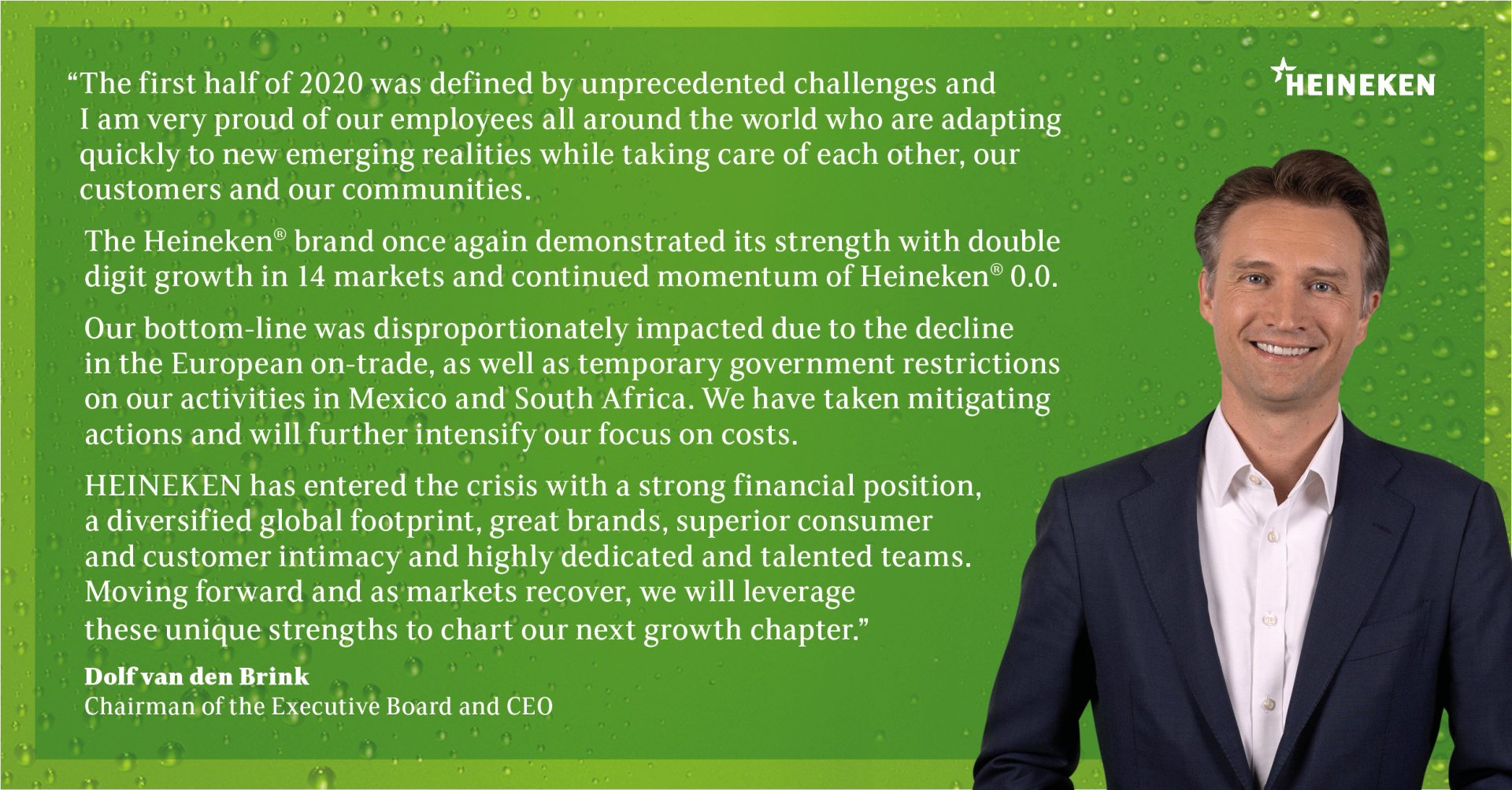 The top-line performance was materially impacted as multiple countries took far-reaching measures to mitigate the spread of COVID-19 including the restricted movement of populations, outlet closures and mandatory lockdown of production facilities. At this moment, none of our breweries is closed due to government restrictions.

Net revenue (beia) declined 16.4% organically driven by a 13.4% decline in total consolidated volume and a 3.6% decline in net revenue (beia) per hectolitre due to the adverse channel, product and country mix effects. The underlying price mix on a constant geographic basis was down 1.3%.

Consolidated beer volume declined 11.5% organically. As expected, the impact of the COVID-19 crisis deepened in the second quarter when beer volume declined 19.4%. After a low point in April, volume started to gradually recover into June as lockdowns were lifted around the world and customers restored depleted inventories.

Premium volume declined high-single digits, outperforming the rest of the portfolio, mainly driven by the resilience of Heineken®.

Heineken® volume declined 9.0% in the second quarter to close the first half with a 2.5% decline. Heineken® is the most trusted international beer brand and is outperforming the overall category.

Following a pause, some of our global sponsorship platforms are resuming activities for the second half of the year.

Tiger declined mid-single digits with sharp declines in Singapore, Cambodia and Malaysia and a small decline in Vietnam. In contrast, Desperados grew in the mid-teens, driven by France, Poland and the Netherlands.

Digitalisation accelerated throughout the crisis as consumers changed shopping patterns and customers adapted to the lockdowns.

As a result, our e-commerce platforms showed strong growth:

Operating profit was materially impacted by the revenue decline, incremental expenses and impairments due to the COVID-19 crisis, partially offset through mitigation actions.

Regarding the on-trade business in Europe, HEINEKEN has a vertically integrated business model, including wholesale in several markets as well as pubs in the UK, which provides close proximity to customers and consumers enabling a broader range of products, better service and deeper insight into our customer and consumer base.

While this is a long-term competitive advantage with typically higher variable profits, it also requires a higher fixed cost structure and explains a disproportionate short-term drag on profit. At the end of July, we estimate 90% of outlets in Europe have reopened.

In Mexico, beer volume contracted in the mid-twenties as our operations were suspended in April and May. In June, we resumed sales and customers began rebuilding inventories. In July, we observed an increase in market restrictions including alcohol sales bans in some states and on-trade restrictions.

In South Africa, total volume declined in the forties, due to a ban on the sale, distribution and production of alcohol from late March to end of May. After-sales resumed in June, a new ban on alcohol sales was implemented mid-July.

Input costs per hectolitre increased by about 10% with the combined negative impact of channel and product mix and transactional currency effects, despite lower commodity prices.

Read Also:  CBN Manunafucting PMI down by 0.5 points to 53.6 in August

Other incremental expenses included higher depreciation, credit losses, safety & protection equipment, donations and other forms of support to our customers and communities.

In March, we implemented cost mitigating actions that resulted in a net organic reduction of half a billion of other expenses (beia) in the first half. This excludes the effects on input costs, goods for resale, transport and depreciation. For more details, please refer to pages 14 and 15.

During the first half of 2020, we continued to advance our sustainable development commitments. Despite the significant drop in volumes, key water efficiency and local sourcing metrics were stable and we increased our energy from renewable sources to 21% (2019: 19%) driven by Mexico and Vietnam. We also joined the Water Resilience Coalition, which was launched in March this year, pledging a commitment to collective action and net-positive water impact by 2050.

Given the circumstances, we transformed our #EnjoyResponsibly campaign temporarily to #SocialiseResponsibly. We have redirected part of our 10% Heineken® media investments from ‘responsible consumption’ to ‘socialise responsibly’ campaigns. The new Heineken® Back to the Bars campaign called ‘#SocialiseResponsibly to keep bars open’ is meant to celebrate the return to the bars whilst reminding consumers to embrace social distancing and other safety measures.

This included impairments of €548 million in tangible and intangible assets. The impact of the crisis in developing economies precipitated the need for these impairments. In total, cash-generating units representing €3 billion in fixed assets were identified for impairment tests resulting in the impairments in Papua New Guinea (€196 million), Jamaica (€138 million) and various other smaller impairment charges.

Net profit (beia) decreased by 75.8% organically to €227 million (2019: €1,054 million). The decrease was higher than the decline in operating profit (beia) due to higher net finance expenses, higher non-deductible interest expenses and other tax effects and the lower relative decline in minority interest. Net loss after exceptional items and amortisation of acquisition-related intangibles was €297 million (2019: €936 million gain).

Free operating cash flow amounted to an outflow of €809 million (2019: €578 million inflow) mainly due to lower cash flow from operating activities and an increase in working capital driven by the change in payables.

The additions to PP&E executed in 2020 amounted to €484 million (2019: €760 million), a reduction of 36% as all non-committed CAPEX was suspended from late March, unless necessary for safety or business continuity.

HEINEKEN entered the crisis with a strong balance sheet and an undrawn committed revolving credit facility of €3.5 billion that matures in May 2024 and does not contain financial covenants. In recent months, HEINEKEN has successfully secured €3 billion in additional financing by issuing new bonds.

HEINEKEN is well prepared to meet its financial commitments, including the €1 billion bonds maturing on 4 August 2020. As a measure of prudence, HEINEKEN announced it will deviate from its dividend policy and will not pay an interim dividend following its half-year results.

Since the latest update on 12 February 2020, a number of currencies have depreciated significantly versus the Euro, especially the Mexican Peso, Brazilian Real and South African Rand. However, given the uncertainty in profit estimations for this year, it is not possible to provide a reliable estimate of the translational currency impact.

The COVID-19 pandemic constitutes a major negative macroeconomic development and as such, it is having a significant impact on HEINEKEN’s markets and on its business in 2020.

On 8 April, HEINEKEN withdrew all guidance for 2020 given the lack of visibility on the end date of the pandemic and the duration of its impact. Although we observe a gradual recovery since the trough in April across most markets, the situation continues to be volatile and uncertain.

As a consequence, HEINEKEN is only able to share directional information for the remainder of the year.

We have taken mitigating actions and will further intensify our focus on costs, balancing the reduction of discretionary expenses with providing sufficient support behind our brands and route to market. Non-committed supply chain CAPEX will continue to be suspended, while commercial CAPEX will resume if and when required to support our current and future top-line growth.

Significant uncertainty remains on the impact of the COVID-19 pandemic, including risks related to containment measures, supply chain continuity, cyber-security incidents and a macroeconomic downturn in general.

Given the circumstances, we expect to continue to provide incremental disclosures of the material effects of the COVID-19 crisis on our markets and businesses. The next update will come with our third-quarter trading update.

HEINEKEN, The Coca-Cola Company and The Coca-Cola System in Brazil have reached an agreement to redesign their longstanding distribution partnership in Brazil. The Agreement...
Read more

Heineken has announced that it will cut 70 jobs and put investments on hold in South Africa, following the impact of alcohol bans amid the...
Read more
- Advertisement -