The FGN bond space started on a very bearish note triggered by selling actions from some local investors to raise cash for their remittance to PENCOM off the back of MDA staff regularization.

The market witnessed a sharp jump in bids causing the bid/offer spread to widening significantly by the close of business. Yields expanded by c.124bps on the average across the benchmark curve.

We expect the bearishness to slow down in tomorrow’s trading session as other local investors may look to cherry-pick at these improved yields. 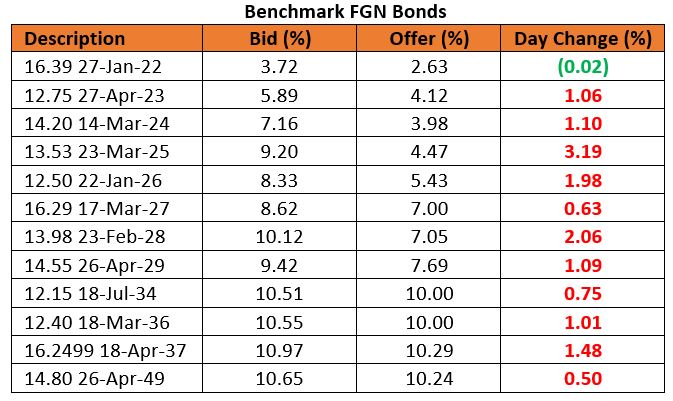 At the OMO bills space, the tightness in market liquidity caused triggered sell-offs across the curve as the market opened and stayed one-way (all offers and no bids) for most of the trading session.

We saw March bills jump by almost 100bps, starting at around 3.65% on the offer but getting to almost 4.65% levels by the close of trading. December and January bills were also part of the major losers in the market, as rates increased by an approximately c.50bps D/D. Consequently, rates expanded by c.67bps compared to yesterday’s level.

On the NTB side, although it remained sparely offered, most participants adjusted rates upward to reflect the movement seen in the OMO space. The market stayed calm for most of the trading session.

We expect the bearishness in the OMO space to persist tomorrow, albeit less aggressive especially on the short- and mid-dated maturities. 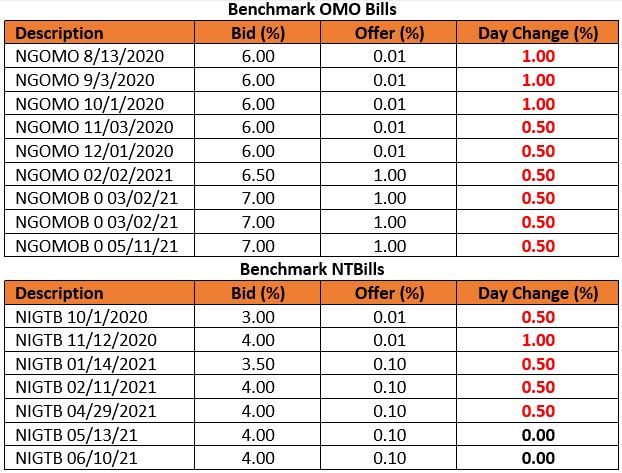 System liquidity figures opened today with c. N268bn positive, as money market rates, recoiled by an average of c.N429bps due to reducing funding pressure at the market today. Consequently, OBB and OVN rates closed the day lower at 9.00% and 10.08% respectively.

For tomorrow, we expect the interbank rates to fully slide into a single-digit corridor as the funding pressure remains low amongst the market players.

The USD/cash market closed slightly lower compared to yesterday as FX demand dwindle slightly in the space while most of the other market remained relatively flat. However, at the IEFX space, we saw the scarcity of dollars persist with Naira depreciating by N1.00k in that space as most banks remained bid between N387.00 and N389.00 to the dollar.

The NGERIA Sovereign tickers continued its gradual rally, as yields compressed by c.20bps D/D. The mid-date papers were the most demanded papers (2031s and 2032s), as demand increased by local participants.

The NGERIA Corps tickers were fairly quiet, except for ACCESS 21s which saw sustained demand interest and strengthened by c.39bps on yield.

The global economy continued to see modest recovery at the beginning of the fourth quarter relative to the end of the preceding quarter –...
Read more

The Central Bank of Nigeria on the authority of The Debt Management Office (DMO) on behalf of the Federal Government Of Nigeria Offers for...
Read more
- Advertisement -